A miniscule special ingredient blended with satellite materials could lead to significant mass savings for future missions. An ESA project with Adamant Composites in Greece tested how the addition of graphene – microscopic flakes of carbon just a single atom thick, combining robust strength with electrical conductivity – plus other nano-sized materials has the potential to optimise a satellite’s thermal and electrical properties.

The airless vacuum of space is a place where a satellite can be hot and cold at the same time, which part of it in sunlight and the rest in the shade. Accordingly thermal engineers work diligently to minimise temperature extremes within a satellite’s body, because heat buildups might lead to parts going out of alignment or even buckling.

Another undesirable outcome in highly-insulating vacuum conditions is for satellite surfaces to build up electrical charge, which may eventually result in disruptive or damaging discharge events. 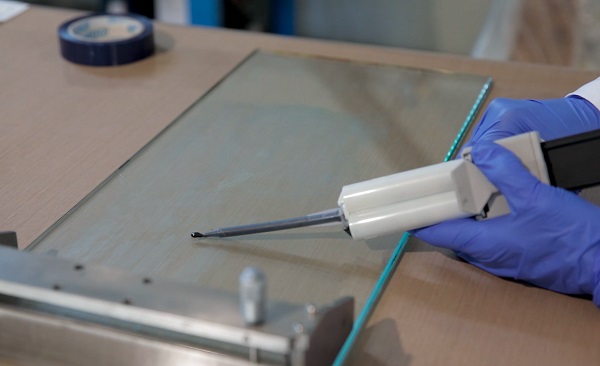 Traditionally, to stave off such effects, mission designers insert dedicated heat-conducting infrastructure such as heat straps and pipes, while metal grounding strips around regions of the satellite provide conductive paths.

As a complementary strategy, Adamant Composites oversaw an ESA project to add graphene and other 2D materials on a ‘nano-enabling’ basis to the prepreg composite materials used to make satellite panels, as well as the adhesives used to embed inserts to join structural parts together and/or bond onboard electronics.

The project was supported through ESA’s General Support Technology Programme (GSTP), readying promising technologies for space and the open market, with testing performed by the Applied Mechanics Laboratory of the University of Patras, at the materials level, and Beyond Gravity in Germany, performing panel level qualification.

Athanasios Baltopoulos, Commercial Director of Adamant Composites explains: “The idea has been to employ nanotechnology to modify these structural composite materials to increase their thermal and electrical performance. We had proven the concept for space in previous activities.” 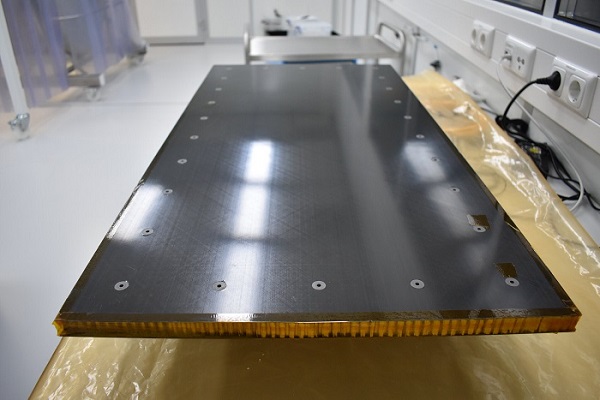 Nicolas Blasakis, Materials & Process Engineer at Adamant Composites, adds: “We already knew it would work in principle, so this was not a fundamental study. The scope was more in the direction of maturing the products and validating that it can work in the appropriate industrial environment.”

The project began with characterising the stability of the materials and processes involved, then qualifying the resulting space component – which involved hardware demonstrations in representative mechanical and thermal environments. 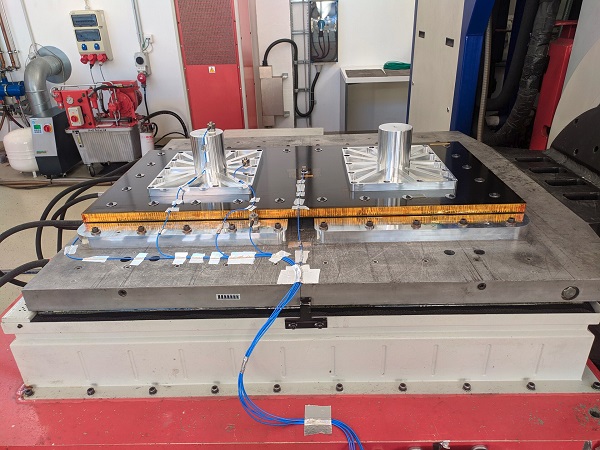 Two 0.5 x 1 m carbon fibre reinforced polymer (CFRP) sandwich panels were manufactured for testing: one using conventional materials and the other nano-enabled equivalents. With appropriate mass dummies assembled on them and test adapters, both panels were subject to vibration and thermal cycling simulating relevant environment conditions. Additional inspections such as ‘hammer testing’ and laser tracking were performed to confirm they met the set requirements.

Going one step further to reveal the thermal benefit of using nano-enabled materials, a dedicated smaller size engineering model was developed where custom screws were used to inject heat into standard inserts of the panels and to study its propagation under vacuum and varying environmental temperatures. X-ray tomography gave extra insight to the potting quality, in terms of the uniformity of the adhesive application process. 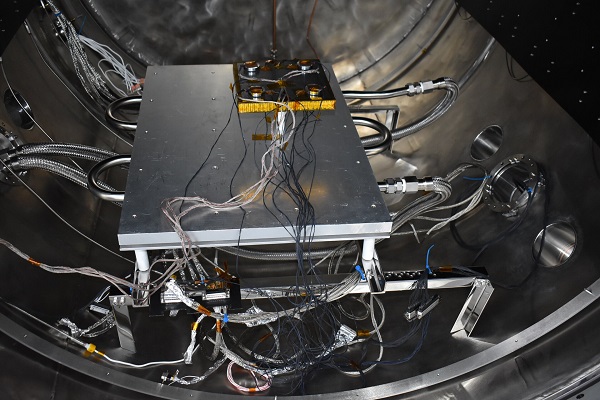 The addition of graphene to the adhesive material increased its electrically conductivity by several orders of magnitude, while boosting its thermal conductivity threefold and maintaining its structural performance. In parallel the CFRP exhibited a 25% increase in thermal conductivity in the composite through thickness direction. On panel level, these bring significant suppression in temperature differentials, reducing thermal gradients by half.

Dr. Baltopoulos notes: “The most important thing achieved is the confirmation that the technology works well following the steps towards industrialisation, that it can support a real volume project, and that we are ready to go further. If we were to employ these nano-enabling technologies to an actual mission then we could enable mass reduction and better control, by removing redundant thermal and electrically conductive parts through design.”

The results also validate the company’s ability to manufacture satellite panels from both conventional and nano-enabled materials, representing a novel industrial capability for Greece, which will enable Adamant Composites to explore the option of participating in future European and/or national small satellite missions.

As a next technological step, the company plans to study how the nano-enabling materials could be combined with more typical thermal elements for enhanced performance, such as radiators and heat pipes.

ESA Technical Officer for the project Benoit Bonvoisin comments “The idea of nano-enabling gives us the opportunity to tailor composite materials. This sounds promising for other applications as well, such as enhancing the safe ‘demisability’ of CFRP – ensuring that they will burn up during atmospheric reentry to prevent any hazard to people or property on the ground.” 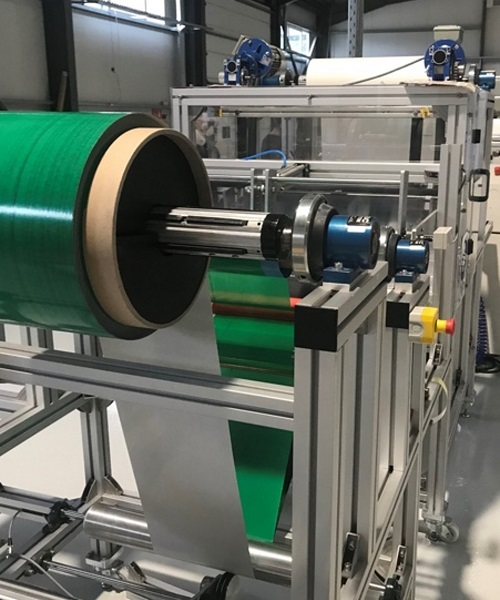 “Collaborating with ESA on this project has had numerous benefits,” adds Mr. Blasakis. “In terms of market knowledge, ESA missions represent potential end customers for these developments, so we’ve been gaining useful perspective. And, along with the support of our ESA Technical Officer and their fellow engineers, we also obtain access to some specialist equipment for materials testing, as needed.

“ESA’s guidance means we could get connected with the appropriate person to answer our questions, to find out how the processes we are establishing are aligned with industry requirements, which has proved very useful throughout the evolution of a young company like ours.”