Researchers at Osaka University create an ultrathin silicon membrane with arrays of nanopores to permit osmotic flow to generate electricity, which may provide a previously untapped source of renewable energy from the oceans.

Devising renewable sources of energy is a key concern for scientists, political leaders and communities as the world comes to terms with the realities of climate change and the limits of the earth's natural resources. In an exciting new development, scientists from the Institute of Scientific and Industrial Research at Osaka University have demonstrated that electricity may be obtainable from water with a high salt concentration, such as seawater.

Some people think about "osmosis" as just a science term they were forced to learn in elementary school biology class. However, the spontaneous motion of dissolved ions or molecules through a semi-permeable membrane when there is a concentration difference between the two sides can be harnessed to generate electricity. And luckily for us, the oceans are filled with salty water, which may be used to help alleviate humanity's ever-growing demand for energy. However, in order to be practical, this membrane needs to be very thin and highly selective to allow ions--but not water molecules--to pass through.

Now, a research team led by Osaka University has used conventional semiconductor processing technology to precisely control the structure and arrangement of nanopores in an ultrathin silicon membrane. Because these fabrication methods have been around for decades, the costs and design complexities were minimized. Moreover, the size and location of the pores could be precisely controlled. "Whenever there is a non-equilibrium situation, such as two water tanks with different salt concentrations, there is often an opportunity to covert this thermodynamic energy into electricity," says first author Makusu Tsutsui. 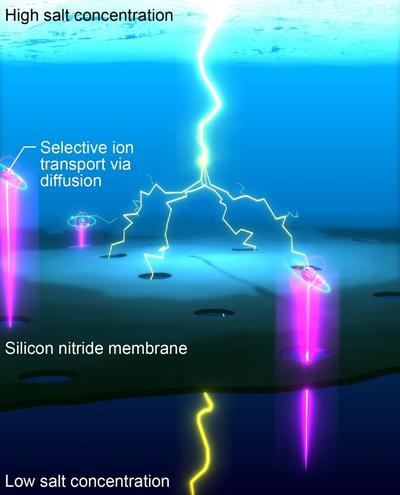 Using a single 20-nm-sized nanopore, the device reached a peak power efficiency of 400 kW/m². However, the researchers found that adding too many nanopores to the membrane actually reduced the power that could be extracted. The optimal configuration of pores, 100-nm-sized nanopores arranged in a grid with a spacing of one micrometer, yielded an osmotic power density of 100 W/m². This was an important step in understanding how to design nanopore devices for best power generation. "Many other research groups are promising environmentally friendly 'green' energy, but we go one step further and propose 'blue' energy based on oceanwater that can be applied on an industrial scale," senior author Tomoji Kawai says. Future projects may include ways to scale up the devices for real world testing.