Researchers demonstrate that the process of anion nanoconfinement is enhanced by an acidic adsorption layer in carbon nanotubes.

Carbon materials separate anion impurities and purify water but the underlying mechanism remains unknown. Recently, researchers from Okayama University, Japan investigated the anion adsorption mechanism in single-walled carbon nanotubes (SWCNT). They found that an acidic adsorbed layer is formed in the SWCNT pore even when the aqueous environment has a neutral pH. The layer in the pore adsorbs nitrate anions due to strong confinement by the pore and strong interaction between the layer and anion.

Efficient purification processes that separate impurities from air and water are necessary to sustain life on earth. To this end, carbon materials have long been used for deodorizing, separating, and removing harmful anion impurities by adsorption. So far, the detailed mechanism by which carbon purifies water has remained a mystery. Additionally, it is not known if the aqueous solution adsorbed on the carbon material is acidic, alkaline, or neutral. To address these gaps, researchers led by Dr. Takahiro Ohkubo, Associate Professor in the Department of Chemistry, Faculty of Natural Science and Technology, Okayama University, Japan investigated the fundamental mechanism by which anions are adsorbed by carbon nanopores. 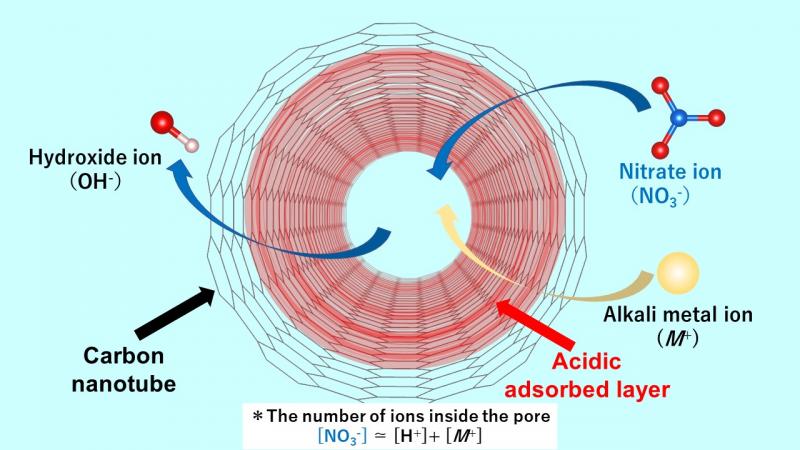 In a recent article made available online on 16 September 2022 and published in volume 629 Part B of the Journal of Colloid and Interface Science, the researchers report employing Raman spectroscopic tools to examine the adsorption of nitrate ions by the cylindrical pore of single-walled carbon nanotubes (SWCNT). Dr. Ohkubo and his colleagues succeeded in deciphering the mechanism of acidic layer formation near the pore walls. It turns out that, when an aqueous solution containing ions penetrates the carbon material, even if the aqueous solution is neutral, an acidic aqueous layer containing protons is formed that maintains a stable state. Commenting on the novelty and fundamental nature of their work, Dr. Ohkubo states, “To date, there have been no reports demonstrating the existence of acidic adsorption layers formed within nanotubes of carbon materials.”

The research team, which also included Dr. Nobuyuki Takeyasu, Associate Professor in the same faculty in Okayama University, found that the acidic layer facilitates efficient adsorption of the negatively charged nitrate anion impurities, where the adsorbed amount of nitrate ions is much larger than that of the cations, or the positively charged groups. In addition, hydroxide ions are generated as counter-ions. The anions present in the bulk solution are exchanged with the hydroxide ions in the SWCNT, making the aqueous solution alkaline. The team examined anion adsorption using several alkali metal nitrates including lithium nitrate, sodium nitrate, rubidium nitrate, and cesium nitrate solutions. They found that more nitrate ions are adsorbed than metal ions. The amount of proton adsorption was almost the same regardless of the type of alkali metal ion used. Dr. Ohkubo observes, “The acidic layer in the pore can strongly adsorb the nitrate anion species because of both strong confinement by the pore and the strong interaction between the layer and the anion.”

The findings are indeed important steps towards designing and developing carbon nanotubes suitable for ion adsorption and purification of water and air. The mechanism of purification set forth in this research is a novel model that explains the alkalinity of the aqueous solution medium, which has hitherto been a mystery. The researchers observe that the findings of their study strongly point to the need of neutralizing water before use when ionic impurities are trapped by carbon materials. Another remarkable contribution of this study is the demonstration that the nanomaterial interface is a novel chemical reaction field, which could guide further experiments. Taken together, this work takes our understanding of the mechanism of anion adsorption by carbon to the next level, making way for novel carbon nanotubes as efficient purifiers.