Researchers have found a promising intermetallic alloy of palladium and zinc (i-PdZn) that highly resistant to corrosion in alkaline aqueous solutions. 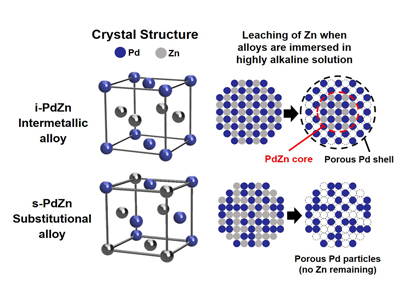 The crystal structure of the intermetallic i-PdZn alloy allows Zn to be retained at the core, surrounded by a protective shell of Pd atoms. This gives the i-PdZn better corrosion resistance when immersed in highly alkaline solutions, unlike the substitutional alloy s-PdZn, where random replacement of Pd atoms by Zn in the crystal structure allows the Zn to leach out quickly.

When both the i-PdZn and the substitutional palladium-zinc alloy were immersed in an aqueous alkaline solution, the researchers found that most of the zinc atoms leached out of the substitutional alloy within a few minutes. However, the regular arrangement of palladium and zinc atoms in the i-PdZn effectively prevented the zinc atoms in the middle of the alloy from leaching out. This created a protective skeletal palladium shell around the outside of the alloy, giving the i-PdZn a much higher corrosion resistance.

Furthermore, when used as an electrocatalyst to generate, the i-PdZn exhibited a peak ethanol oxidation activity approximately 5.1 times as high as that of pure palladium. This was due to both the electronic properties of the alloy’s core, and the larger surface area created by the skeletal palladium shell in the aqueous alkaline solution.

“The unique properties of intermetallic alloys that make them good catalysts were previously known, but now we have shown that the dissolution of zinc is greatly suppressed in our intermetallic palladium-zinc alloy, which makes it much more corrosion-resistant than the substitutional alloy,” Professor Inoue concluded. “We believe that these results may provide clues for the development of non-precious metal electrocatalysts, for which corrosion resistance is an issue.”

The research results were published online on July 23, 2022, in Research on Chemical Intermediates, a journal published by Springer Nature.