Micelles, used in pharmaceutical industry, burst upon contact with virus, sending immediate alert. Scientists have shown that they can detect SARS-CoV-2, the virus that causes COVID-19, in the air by using a nanotechnology-packed bubble that spills its chemical contents like a broken piñata when encountering the virus.

Such a detector could be positioned on a wall or ceiling, or in an air duct, where there’s constant air movement, to alert occupants immediately when even a trace level of the virus is present.

The heart of the nanotechnology is a micelle, a molecular structure composed of oils, fats and sometimes water with inner space that can be filled with air or another substance. Micelles are often used to deliver anticancer drugs in the body and are a staple in soaps and detergents. Almost everyone has encountered a micelle in the form of soap bubbles.

A team of scientists at the Department of Energy’s Pacific Northwest National Laboratory created a new kind of micelle, one that is stamped on the surface with copies of an imprinted particle for SARS-CoV-2.

The team filled micelles with a salt capable of creating an electronic signal but that is quiescent when packed inside a micelle. When a viral particle interacts with one of the imprinted receptors on the surface, the micelle pops open, spilling the salt and sending out an electronic signal instantly.

The system acts like a signal magnifier, translating the presence of one viral particle into 10 billion molecules that together create a detectable signal. The developers say that the detector has advantages over today’s technologies; it produces a signal faster, requires a much lower level of viral particles, or produces fewer errors.

The team published its findings online Oct. 25 in MRS Communications.

“There is a need for this kind of low-cost detection system,” said PNNL scientist Lance Hubbard, a nanotechnology specialist and an author of the paper. “Perhaps it could be implemented in schools, or in hospitals or emergency rooms before patients have been fully assessed—anywhere you need to know immediately that the virus is present.”

PNNL’s micelle technology is the product of an arduous chain of 279 separate chemical steps developed by first author Samuel Morrison together with Hubbard and other PNNL scientists.

COVID detection: one in billions

The team estimates that the technology can pluck one viral particle out of billions of other particles. The detector is so sensitive that the team had a challenging time identifying the lower limit. The team used both inactivated SARS-CoV-2 viral particles and the virus’s spike protein in its tests.

While the technology detects the virus within a millisecond, the device takes an additional minute to run quality-control software to confirm the signal and prevent false alarms.

Micelles can be delicate, like a soap bubble from a child’s wand. But, under certain circumstances, scientists can make hardier micelles that spill their contents at just the right time and place—for instance, these micelles that burst open when a viral particle is detected.

The PNNL micelle is bilayer, with one polymer-coated micelle inside the other, and the entire structure immersed in water. Each micelle is about 5 microns wide. On the outer surface are several imprinted particles, made of silica, about 500 nanometers wide. Each imprint is an opportunity for a COVID-causing viral particle to bind, causing the bilayer micelle to pop open. 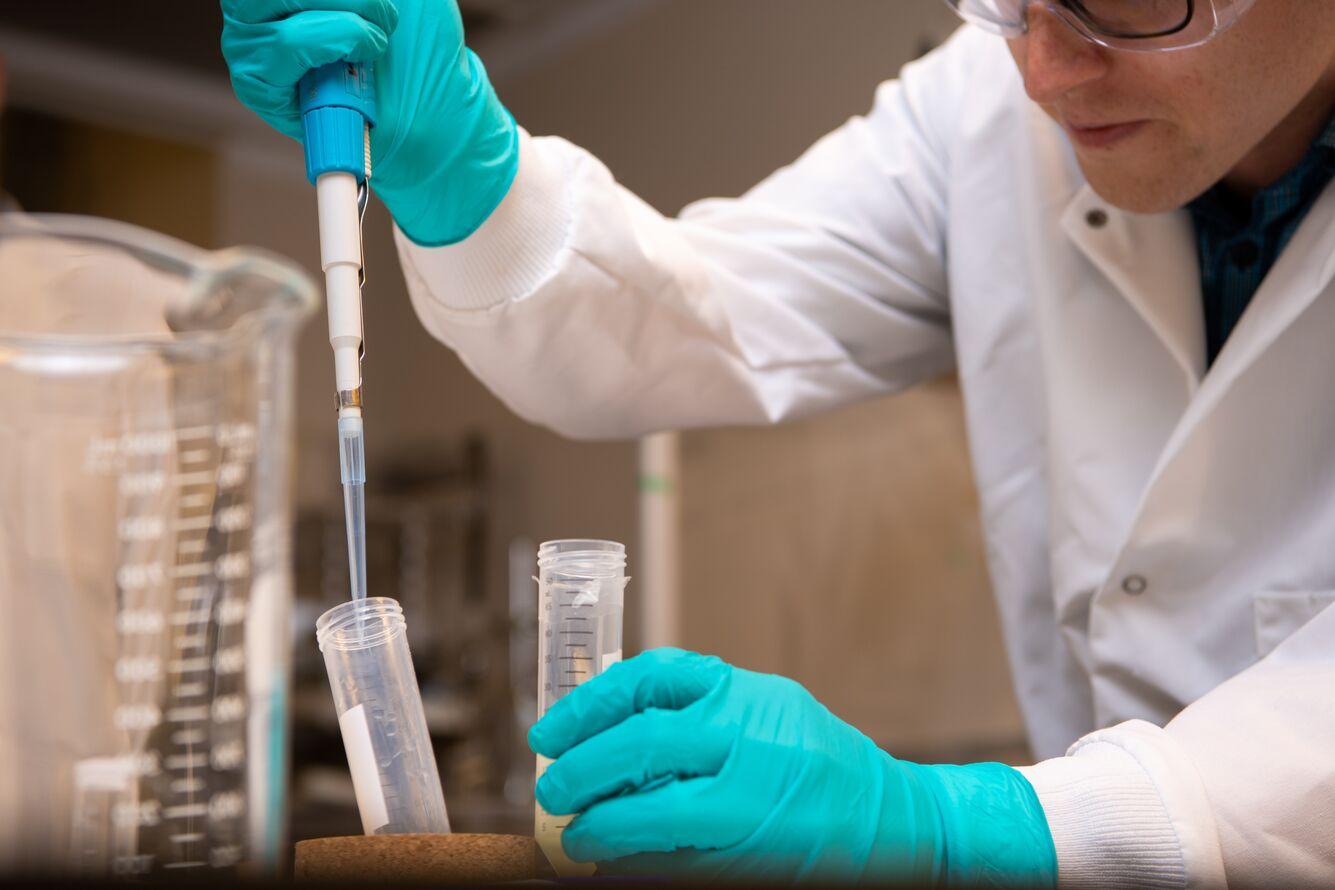 Caleb Allen transfers coronavirus-detecting micelles from one test tube to another. The yellowish color comes from linseed oil, which plays a critical role in the 279-step chemical process developed by PNNL scientists.

“Combining micelles with a technology to imprint or stamp them is not something many people have done before,” said Hubbard. “Imprinting a molecule with our molecule of interest inserts a vulnerability into the micelle—which is what we want in this case.”

Morrison, a former Marine, began this line of work hoping to develop a new way to help soldiers quickly detect explosives in combat. He connected with Hubbard, an expert in nanosynthesis. They switched the focus of the project to SARS-CoV-2 when the pandemic hit. Other possible uses of the technology include detection of fentanyl and environmental toxins. 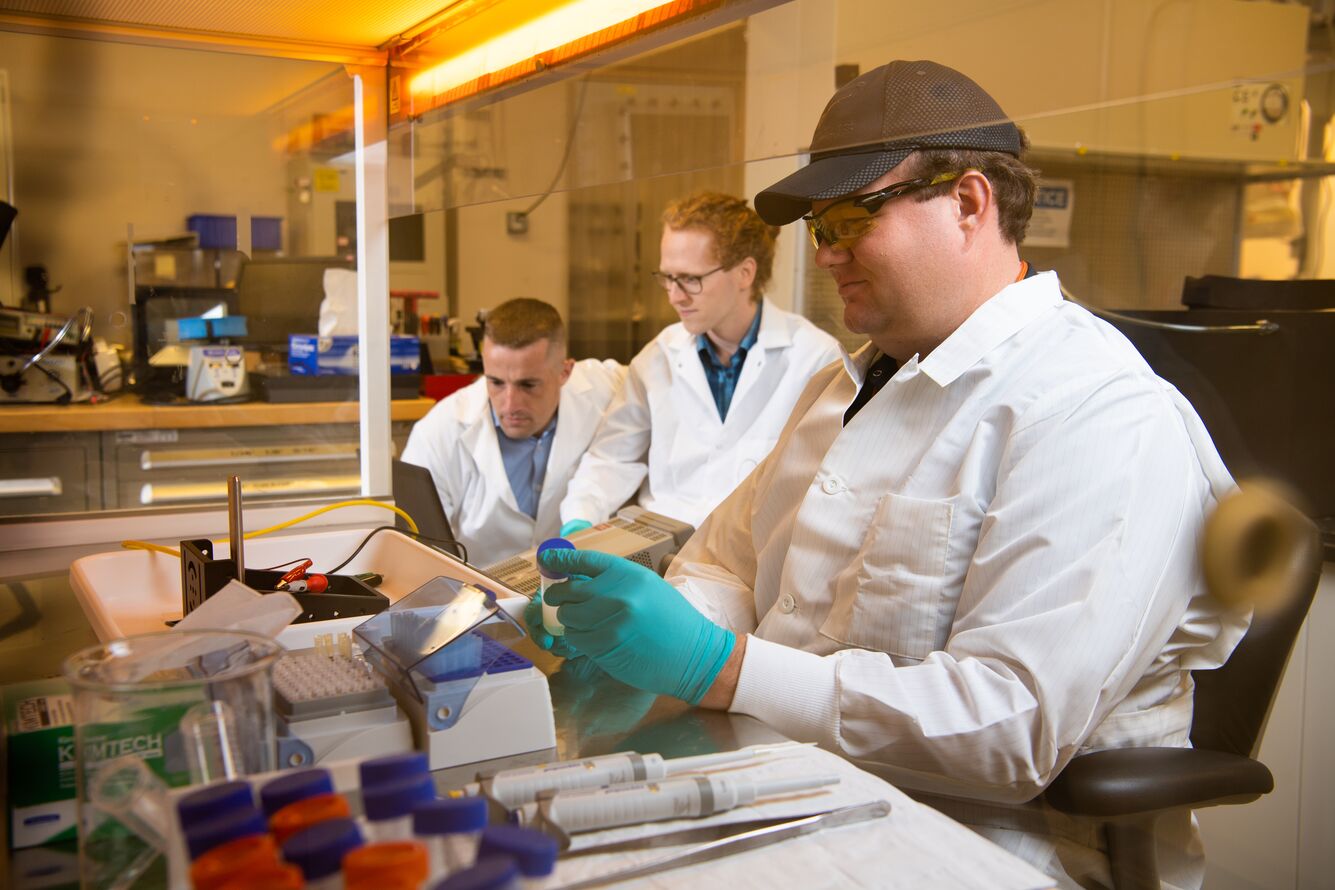 Battelle, which manages and operates PNNL for DOE, has filed for a patent on the technology. The scientists say the technology needs to be developed further, perhaps with a licensing partner, before it can be deployed broadly.