Researchers have reported on nanometer-scale imaging of two of Stradivari’s violins, revealing a protein-based layer between the wood and varnish.

Stradivarius violins produce elegant music with a level of clarity that is unparalleled by modern instruments, according to some musicians. And it’s the finishing touches — mysterious treatments applied hundreds of years ago by Antonio Stradivari — that contribute to their unique look and sound. In a step toward unraveling the secret, researchers in ACS’ Analytical Chemistry report on a nanometer-scale imaging of two of Stradivari’s violins, revealing a protein-based layer between the wood and varnish. 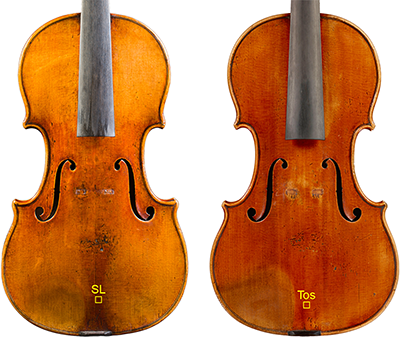 A highly precise, nanometer-scale imaging technique revealed a protein-based layer between the wood and the varnish coating of these two Stradivarius violins.

Previous studies have reported that some stringed instruments crafted by Stradivari have a hidden coating underneath the shiny varnish. This coating’s purpose would have been to fill in and smooth out the wood, influencing the wood’s resonance and the sound that’s produced. Knowing the components of this film could be key to replicating the historic instruments in modern times. So, Lisa Vaccari, Marco Malagodi and colleagues wanted to find a technique that would determine the composition of the layer between the wood and varnish of two precious violins — the San Lorenzo 1718 and the Toscano 1690.

Using a technique previously used on historic violins, synchrotron radiation Fourier-transform infrared spectromicroscopy, the team found that both samples had an intermediary layer, but this method couldn’t differentiate the layer’s composition from the adjacent wood. Then they turned to infrared scattering-type scanning near field microscopy (IR s-SNOM) to analyze the samples. The IR s-SNOM apparatus includes a microscope that collects images tens of nanometers wide and measures the infrared light scattered from the coating layer and the wood to collect information about their chemical composition. The results of the new method showed that the layer between the wood and varnish of both instruments contained protein-based compounds, congregating in nano-sized patches. Because IR s-SNOM provided a detailed 3D picture of the types of substances on the violin’s surface, the researchers say that it could be used in future studies to identify compounds in complex multi-layer cultural heritage samples.