These Cellulose Nanofibers Might Be an Alternative to Petroleum-based Plastics

Researchers from The Institute of Scientific and Industrial Research (SANKEN) at Osaka University and collaborating partners have prepared ecofriendly fibers with direction-dependent properties that facilitate facile molding into dental features, microneedles, and complex bio/nanotechnology architectures.

Researchers from The Institute of Scientific and Industrial Research (SANKEN) at Osaka University and collaborating partners prepared hierarchical hydrogels and moldings that consisted of anisotropic, ecofriendly cellulose nanofibers. By simply tailoring the applied voltage during fabrication, complex architectures—such as microneedles and multilayer hydrogels—were easy to prepare. The results of this work will reduce the need for petroleum-based plastics, and in so doing minimize a long-standing source of environmentally persistent waste.

Single-use plastics have saved many lives by improving sanitation in healthcare. However, the sheer quantity of plastic waste—which can take from tens to hundreds of years to decompose—is a global pollution scourge. But now, in a study recently published in ACS Nano, researchers from The Institute of Scientific and Industrial Research (SANKEN) at Osaka University and collaborating partners have developed exceptionally versatile hydrogels and moldings that might replace conventional plastics. 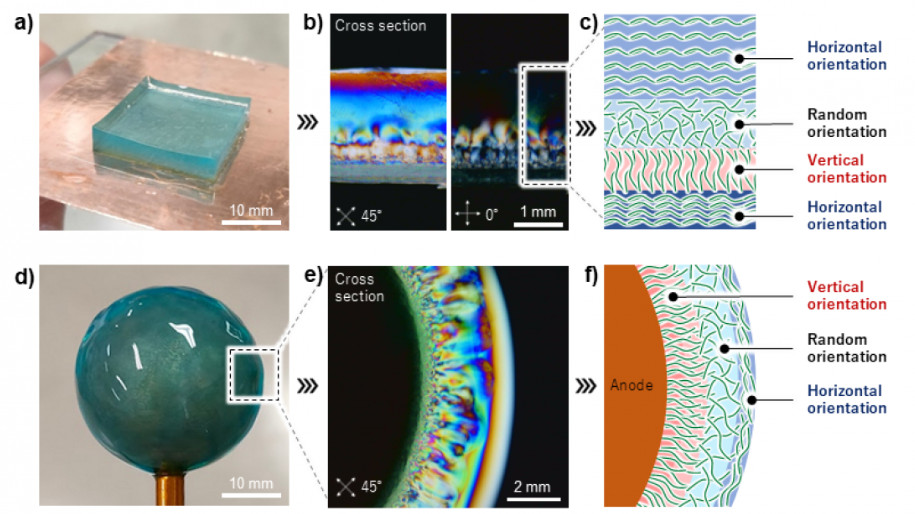 The global scale of plastic waste urgently requires solutions and is being addressed from diverse perspectives. For example, in August 2022, National Geographic published a feature on recycling and repurposing plastic waste. Nevertheless, "the only long-term solution is to develop inexpensive, high-performance, plastic-like alternatives that don't persist in the environment," says Takaaki Kasuga, lead and senior author. "This is an active area of research, but the proposed alternatives to date haven't met society's needs."

While researching the global need for a plastic substitute, Kasuga and coworkers were inspired by cellulose nanofibers. For example, these ultrasmall fibers help plants maintain rigid yet lightweight structures. In fact, on a pound-for-pound basis, cellulose nanofibers help wood to be—by some metrics—stronger than steel. The ability to tailor the hierarchical nature of such nanofibers has made them an active area of research in synthetic tissue and other bioengineering contexts.

Various techniques are currently available for molding nanofibers into a controlled orientation; i.e., to exhibit anisotropy. However, a simple technique that enables one to mold cellulose nanofibers from the nano- to macroscopic scale, on multiple spatial axes, has long been unavailable. To meet this need, Kasuga and coworkers used electrophoretic deposition to fabricate anisotropic cellulose-nanofiber-based hydrogels and moldings.

There were several especially impressive outcomes of this study. One, cellulose nanofibers were oriented horizontally, randomly, and vertically by simply changing the applied voltage. Two, a multilayer hydrogel was easily prepared with alternating nanofiber orientations, in a manner that's reminiscent of biological tissue. Three, "we easily prepared complex architectures, such as microneedles and mouthpiece molds," says Kasuga. "The uniform nanofiber orientation helped suppress hydrogel cracking, and thus resulted in a smooth surface, upon drying." 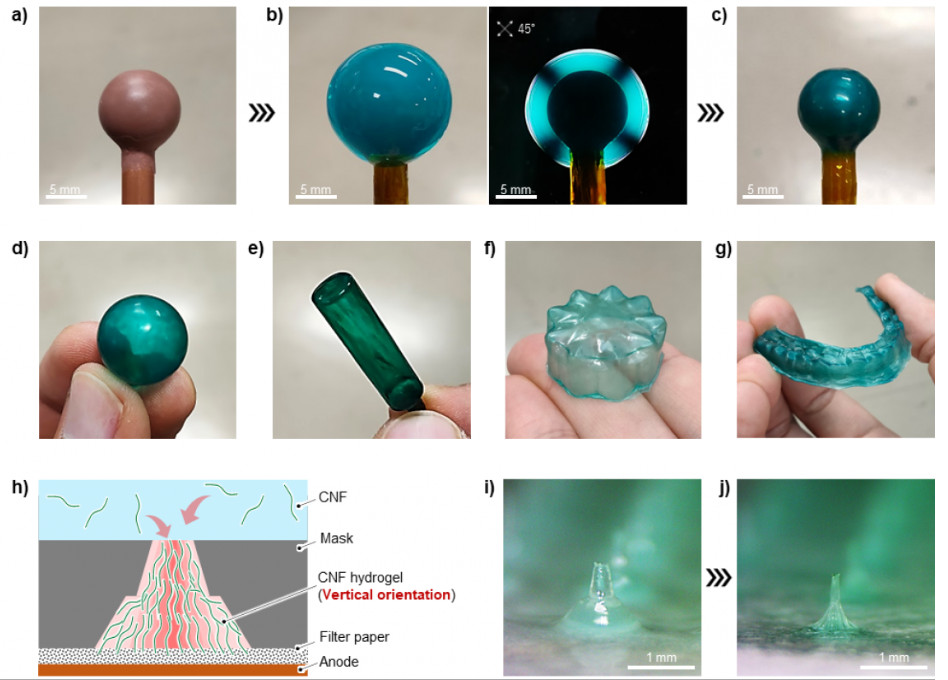 The technique used in this study is not limited to cellulose nanofibers. For example, the researchers also used sodium alginate and nanoclay. Thus, multicomponent materials that exhibit controlled nanoscale orientations are also straightforward to prepare. An immediate application of this study is straightforward manufacturing of complex, hierarchical hydrogels and moldings over a wide range of spatial scales. Such ecofriendly hydrogels and moldings will be useful in healthcare, biotech, and other applications—and thus will help alleviate the need for petroleum-based plastics.