Researchers have proposed a novel technique to measure the cell traction force field and tackle the research gap.

Mechanics plays a fundamental role in cell biology. Cells navigate these mechanical forces to explore their environments and sense the behaviour of surrounding living cells. The physical characteristics of a cell’s environment in turn impact cell functions. Therefore, understanding how cells interact with their environment provides crucial insights into cell biology and has wider implications in medicine, including disease diagnosis and cancer therapy.

So far, researchers have developed numerous tools to study the interplay between cells and their 3D microenvironment. One of the most popular technologies is traction force microscopy (TFM). It is a leading method to determine the tractions on the substrate surface of a cell, providing important information on how cells sense, adapt and respond to the forces. However, TFM’s application is limited to providing information on the translational motion of markers on cell substrates. Information about other degrees of freedom, such as rotational motion, remains speculative due to technical constraints and limited research on the topic. 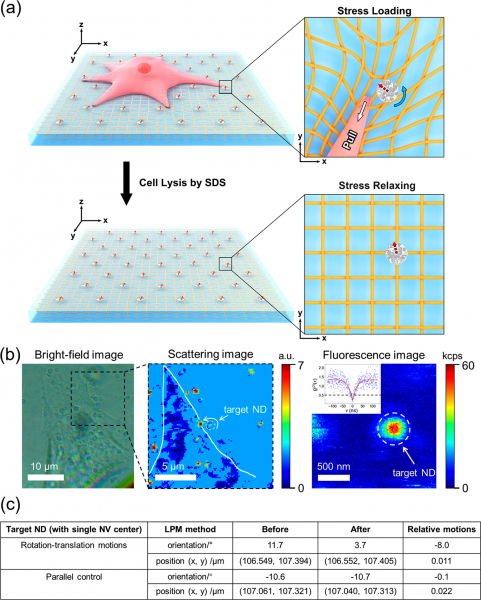 Applying LPM to measure in-plane traction force fields of intact cells.
(a) Schematic illustration showing the design of cell experiments: NDs are randomly embedded in an elastic substrate (PDMS) serving as fiducial markers; before (upper) and after (lower) cell lysis (3T3 cells treated with a detergent ), the orientation and position of NDs are measured via the LPM method. Red dashed arrow represents the projection direction of the NV center axis on the sample plane. (b) Typical bright-field (left panel) and scattering (middle panel) images of a cell fed with NDs. Fluorescence image (right panel) of a chosen ND with single NV center as indicated by the inserted g(2)(τ) measurement. White line (in the middle panel) outlines the profile of the cell. (c) A table shows the relative motions (before and after cell lysis) of a target ND with single NV center.

Engineering experts at the University of Hong Kong have proposed a novel technique to measure the cell traction force field and tackle the research gap. The interdisciplinary research team was led by Dr Zhiqin Chu of the Department of Electrical and Electronic Engineering and Dr Yuan Lin of the Department of Mechanical Engineering. They used single nitrogen-vacancy (NV) centres in nanodiamonds (NDs) to propose a linear polarization modulation (LPM) method which can measure both, the rotational and translational movement of markers on cell substrates.

The study provides a new perspective on the measurement of multi-dimensional cell traction force field and the results have been published in the journal Nano Letters. The research, entitled ‘All-Optical Modulation of Single Defects in Nanodiamonds: Revealing Rotational and Translational Motions in Cell Traction Force Fields’, is also featured as the supplementary cover of the journal.

The research showed high-precision measurements of rotational and translational motion of the markers on the cell substrate surface. These experimental results corroborate the theoretical calculations and previous results.

Given their ultrahigh photostability, good biocompatibility, and convenient surface chemical modification, fluorescent NDs with NV centres are excellent fluorescent markers for many biological applications. The researchers found that based on the measurement results of the relationship between the fluorescence intensity and the orientation of a single NV centre to laser polarization direction, high-precision orientation measurements and background-free imaging could be achieved.

“The majority of cells in multicellular organisms experience forces that are highly orchestrated in space and time. The development of a multi-dimensional cell traction force field microscopy has been one of the greatest challenges in the field,” said Dr Chu.

“Compared to the conventional TFM, this new technology provides us with a new and convenient tool to investigate the real 3D cell-extracellular matrix interaction. It helps achieve both rotation-translational movement measurements in the cellular traction field and reveals information about the cell traction force,” he added.

The study’s main highlight is the ability to indicate both the translational and rotational motion of markers with high precision. It is a big step towards analysing mechanical interactions at the cell-matrix interface. It also offers new avenues of research.

Through specialised chemicals on the cell surface, cells interact and connect as part of a process called cell adhesion. The way a cell generates tension during adhesion has been primarily described as ‘in-plane.’ Processes such as traction stress, actin flow, and adhesion growth are all connected and show complex directional dynamics. The LPM method could help make sense of the complicated torques surrounding focal adhesion and separate different mechanical loads at a nanoscale level (e.g., normal tractions, shear forces). It may also help understand how cell adhesion responds to different types of stress and how these mediate mechanotransduction (the mechanism through which cells convert mechanical stimulus into electrochemical activity).

This technology is also promising for the study of various other biomechanical processes, including immune cell activation, tissue formation, and the replication and invasion of cancer cells. For example, T-cell receptors, which play a central role in immune responses to cancer, can generate extremely dynamic forces vital to tissue growth. This high-precision LPM technology may help analyse these multidimensional force dynamics and give insights into tissue development.

Read the original article on University of Hong Kong.