First insights into engineering crystal growth by atomically precise metal nanoclusters have been achieved in a study performed by researchers in Singapore, Saudi Arabia and Finland. The work was published in Nature Chemistry on November 10, 2022.

Ordinary solid matter consists of atoms organized in a crystal lattice. The chemical character of the atoms and lattice symmetry define the properties of the matter, for instance, whether it is a metal, a semiconductor or and electric insulator.

The lattice symmetry may be changed by ambient conditions such as temperature or high pressure, which can induce structural transitions and transform even an electric insulator to an electric conductor, that is, a metal. 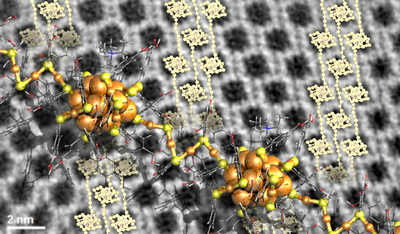 Larger identical entities such as nanoparticles or atomically precise metal nanoclusters can also organize into a crystal lattice, to form so called meta-materials. However, information on how to engineer the growth of such materials from their building blocks has been scarce since the crystal growth is a typical self-assembling process.

Now, first insights into engineering crystal growth by atomically precise metal nanoclusters have been achieved in a study performed by researchers in Singapore, Saudi Arabia and Finland. They synthesized metal clusters consisting of only 25 gold atoms, one nanometer in diameter.

These clusters are soluble in water due to the ligand molecules that protect the gold. This cluster material is known to self-assemble into well-defined close packed single crystals when the water solvent is evaporated.

However, the researcher found a novel concept to regulate the crystal growth by adding tetra-alkyl-ammonium molecular ions in the solvent. These ions affect the surface chemistry of the gold clusters, and their size and concentration were observed to have an impact on the size, shape, and morphology of the formed crystals. Remarkably, high-resolution electron microscopy images of some of the crystals revealed that they consist of polymeric chains of clusters with four-gold-atom interparticle links (see the Figure). The demonstrated surface chemistry opens now new ways to engineer metal cluster -based meta-materials for investigations of their electronic and optical properties.

The work was published in Nature Chemistry on November 10, 2022.

Read the original article on University of Jyväskylä.