A Nanotech Graphene-Powered Lithium-Ion Battery 18650 cell was shot by a 4.5BRA bullet at a speed of 2,917 feet per second.

The  non-flammable qualities of Nanotech Energy's graphene-powered batteries have been demonstrated in a new abuse test.

A Nanotech Graphene-Powered Lithium-Ion Battery 18650 cell was shot by a 4.5BRA bullet at a speed of 2,917 feet per second. Despite the force of impact, the battery did not catch fire and even still held a charge.

In contrast, a rival commercial battery 18650 cell shot by a 4.5BRA bullet at a speed of 2,915 feet per second immediately burst into flames and no longer held a charge. 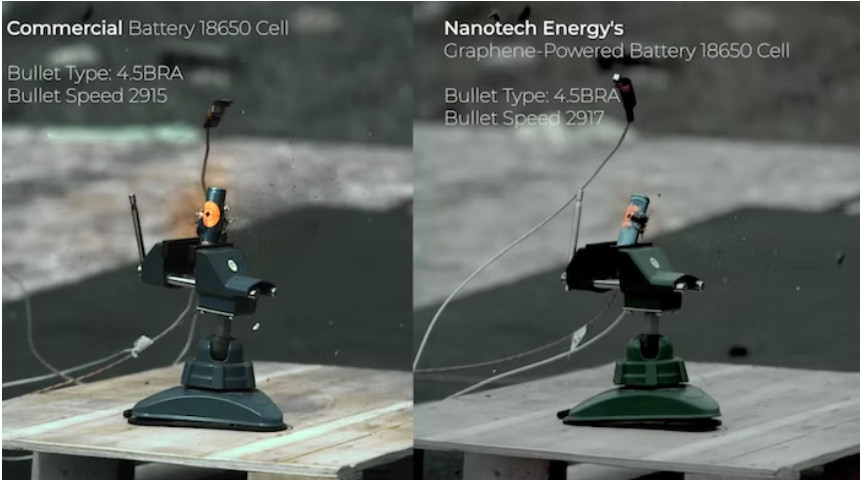 "In recent days and weeks, battery safety has been in the spotlight like never before. The recent high-rise apartment fire in NYC is just one of many fires that have been caused by traditional lithium-ion batteries. Battery technology is a significant part of the future of energy, but safety must be made paramount as we come to rely on it more as a society. This is exactly why we are pioneering safe battery solutions," said Dr. Jack Kavanaugh, CEO and chairman of Nanotech Energy.

The results of the new abuse test reinforce earlier findings about Nanotech Graphene-Powered Lithium-Ion Batteries. In the summer of 2022, they outperformed standard lithium-ion batteries in two other tests.

In a nail test, traditional lithium-ion batteries reached temperatures of 700°C in a fraction of a second. In contrast, Nanotech Graphene-Powered Batteries remained intact, with no fire, no explosion, and only a small hole in the battery cell.

In a heat test, both batteries were warmed to extreme temperatures. The traditional lithium-ion battery went through irreversible change and completely burned down at 150°C. In contrast, when a Nanotech Graphene-Powered Battery was heated to 150°C it kept its performance for nearly two hours. Even further heating the battery to 180°C caused cell venting, but no fires or explosions.

Read the original article on Manufacturing.