The new material exhibits 18 times higher specific energy absorption than the foam currently used in U.S. military combat helmet liners, as well as having much greater strength and stiffness, which could allow it to provide improved impact protection.

Physical forces from an impact can inflict trauma in the brain, causing a concussion. But helmet materials that are better at absorbing and dissipating this kinetic energy before it reaches the brain could help mitigate, or even prevent, concussions and other traumatic brain injuries.

The researchers’ industry partner, helmet manufacturer Team Wendy, is experimenting with the new material in a helmet liner prototype to investigate its performance in real-world scenarios.

“This new material holds tremendous potential for energy absorption and thus impact mitigation, which in turn should significantly lower the likelihood of brain injury,” says Ramathasan Thevamaran, a UW–Madison professor of engineering physics who led the research.

The team detailed its advance in a paper recently published online in the journal Extreme Mechanics Letters.

The new material is an architected, vertically aligned carbon nanotube foam. To create it, the researchers started with carbon nanotubes — carbon cylinders just one atom thick in each layer — as the basic building blocks.

Carbon nanotubes already have exceptional mechanical properties, and to further enhance their performance, the researchers designed a material with unique structural features across multiple length scales. The material’s novel architecture consists of numerous micrometer-scale cylinder structures, each made of many carbon nanotubes. 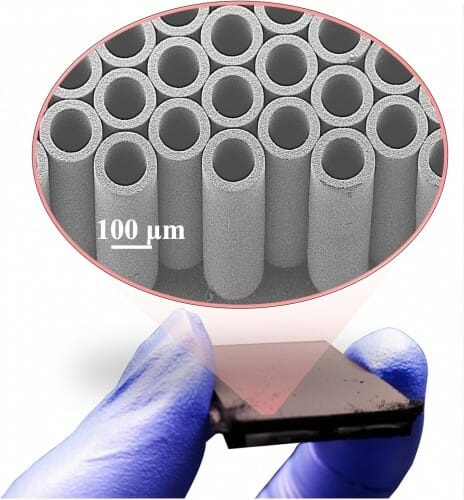 The new material has a novel architecture that consists of numerous micrometer-scale cylinder structures, each made of many carbon nanotubes. These structures give the material its extraordinary shock absorbing properties.

Discovering the new foam’s ultimate optimal design parameters — such as the thickness of the cylinders, their inner diameter and the gap between adjacent cylinders — was no small task. The researchers systematically conducted experiments where they varied each parameter and studied all the possible combinations.

“So we took a few different thicknesses, and then tested that with every diameter size and every possible gap, and so on,” Thevamaran says. “Altogether, we looked at 60 different combinations and conducted three tests on each sample, so 180 experiments went into this study.”

They uncovered a clear winner. Cylinders with a thickness of 10 micrometers or less, arranged close to each other, produced a foam with the best shock-absorbing properties.

“I expected the overall properties to improve due to our interactive architecture, but I was surprised by how dramatically the properties were enhanced when the cylinders were 10 micrometers thick,” Thevamaran says. “It was due to an unusual size effect that emerged in the process-structure-property relations. The effect was very pronounced, and it turned out to be quite advantageous for the properties we were targeting.”

In addition, the new material can remain robustly shock-absorbing at both very high and very low temperatures because of its carbon nanotube building blocks, making it useful for applications in a wide range of extreme environments.