From a Greenhouse Gas to an Industrial Raw Material

Rather than being released into the atmosphere and exacerbating the problem of climate change, CO2 can also be used as a raw material for substances required in industrial processes, such as formic acid or methanol. The conversion of CO2 has already been investigated in detail in laboratory studies, with nanodiamonds serving as an environmentally friendly photocatalyst. Researchers from the Fraunhofer Institute for Microengineering and Microsystems IMM are now working with partners to turn this reaction into a contin-uous process – bringing it much closer to real-world application.

Given the damage that CO2 does to the climate, governments and companies are working hard to limit their emissions as much as possible. In cases where it cannot be avoided, however, CO2 could soon be used as a raw material in the production of industrially relevant C1 building blocks such as formic acid or methanol, which only contain one carbon atom. One possible method involves nanodiamonds: CO2 is converted into formic acid by using nanodiamonds as a catalyst and irradiating them with short-wave UV-C light in an aqueous environment. This method is currently being studied in the laboratories of Prof. Anke Krüger at the University of Würzburg (although Prof. Krüger is now working at the University of Stuttgart). Using diamond as a catalyst might sound expensive, but the diamond used in this process is not a costly jewelry-grade diamond; it is a detonation diamond which is produced on an industrial scale and is therefore relatively inexpensive as a catalyst. Furthermore, it largely consists of carbon and is therefore an environmentally friendly, “green” catalyst.

Researchers from Fraunhofer IMM – together with Prof. Krüger and Sahlmann Photochemical Solutions GmbH – are now taking these reactions one step closer to real-world application within the framework of the CarbonCat project. “Up to now, the experiments have been carried out in a batch reactor; i.e., a stirred flask. There are certain disadvantages to this method,” says Dr. Thomas Rehm, one of the scientists at Fraunhofer IMM. “Firstly, the contacting between the gas and liquid phase and the catalyst is less than ideal; secondly, the catalyst – i.e., the nanoparticles that are floating around – needs to be separated from the solution after the reaction.” 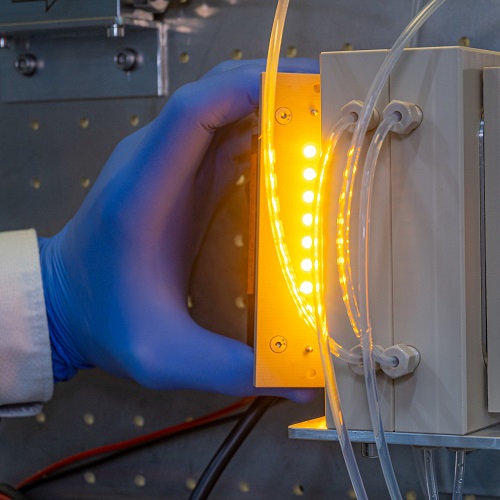 Visible light as the energy source for the photocatalyzed conversion of CO2 on diamond surfaces.

The research team has therefore come up with a way to apply the catalyst to large areas – specifically, reaction plates measuring around 5 by 9 centimeters. “The batch process we have used up to now involves placing all of the components in a flask and waiting until the reaction comes to an end, but we want to achieve continuous operation,” explains Rehm. To this end, the researchers have developed a microreactor with an upright standing reaction plate which features microchannels coated with the diamond catalyst. At the top of the plate is a slit into which water is constantly being pumped. The liquid then runs down the plate. Capillary forces result in the formation of a liquid film with a thickness of 10 to 50 micrometers, which constantly coats the microchannels. The CO2 is directed over the reaction plate from below in a counterflow configuration. “In this way, we can apply much higher quantities of carbon dioxide directly to the catalyst film and in a smaller volume of solution. This improves the gas-liquid-solid contacting, which can result in higher CO2 conversion and hence a larger quantity of formic acid,” says Rehm.

Visible light instead of UV light

Furthermore, the researchers are no longer using energy-intensive UV-C light – as in the case of the nanoscale catalyst – and are instead using visible light which is more inexpensive and is also easier to handle. This requires a modification to the diamond surface as it needs to capture visible light but still trigger the same reaction as the nanoscale diamond. To this end, the researchers chemically bind metal complexes – organic compounds with a metal center which are able to capture visible light – to the diamond surface. However, these complexes do not cover the entire surface, which means that the liquid and carbon dioxide still come into contact with the diamond layer. When visible light shines on the modified coating, some electrons are lifted out of the diamond crystal lattice and onto the surface of the diamond layer. They are then transferred to the CO2 so that, in combination with the water, formic acid can be formed. “What we have here is a light-powered electron pump,” confirms Rehm. In order to supply more electrons, the team can apply a low electrical voltage to the diamond surface.

Some milestones – the large-area catalyst and the use of visible light – have already been achieved. One aspect that the research team is still working on is the low contact time: The CO2, water and diamond layer currently only have 10 to 15 seconds for the reaction – not enough time to produce the amount of formic acid required for real-world applications. The researchers are looking at two solutions: more efficient metal complexes in order to increase the reaction speed, and adapting the reactor to enable longer contact times. 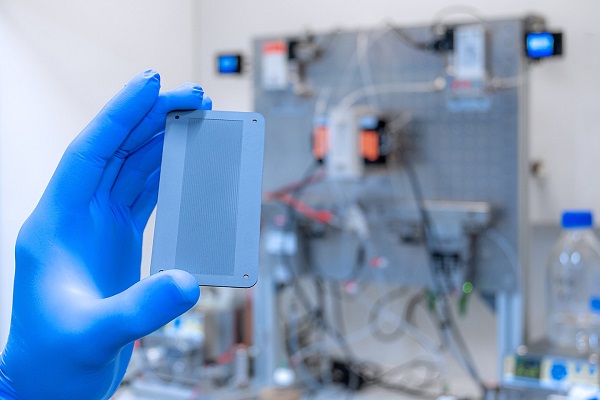 A diamond-coated reaction plate with microchannels as the key element for the continuously operated flow-through reactor which converts CO2 into C1 building blocks.

Combination of photochemistry and biocatalysis

In a separate project, a team comprising members from four different Fraunhofer institutes is making further strides with regard to the use of light in chemistry. The project combines photochemical catalysis with biocatalysis – i.e., with reactions in which biological enzymes serve as the catalyst – and thus brings together two very gentle procedures. The aim is to produce fine chemicals with a high degree of enantiomeric purity, as required in applications such as pharmaceuticals or agrochemicals. Here, the research team exploits cascade-like reactions, made possible by coupling the two catalytic methods. The consortium hopes to achieve a high degree of synergy for the synthesis of complex molecules in the future.

Read the original article on Fraunhofer-Gesellschaft.