The team says they have developed adsorbents, in the form of a powder, that remove microplastics 1,000 times smaller than those currently detectable by existing wastewater treatment plants.

The researchers have successfully tested the adsorbents in the lab, and they plan to engage with industry to further develop the innovation to remove microplastics from waterways.

The research results are published in the Chemical Engineering Journal. 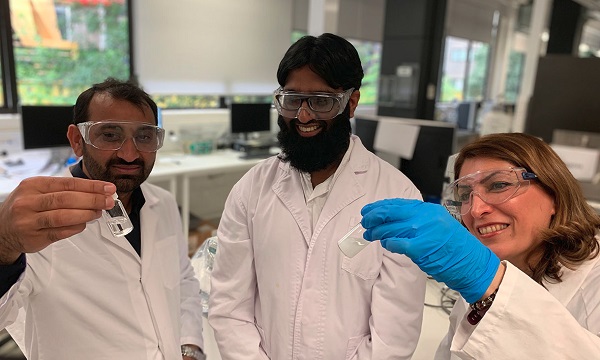 Dr Nasir Mahmood, PhD candidate Muhammad Haris and Professor Nicky Eshtiaghi (left to right) with a sample of water with microplastics and a vial of clean water following its treatment with their innovation.

“The nano-pillar structure we’ve engineered to remove this pollution, which is impossible to see but very harmful to the environment, is recycled from waste and can be used multiple times,” said Eshtiaghi from the School of Engineering.

“This is a big win for the environment and the circular economy.” 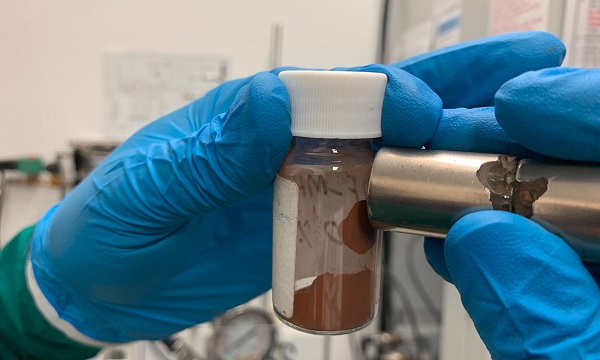 A magnet attracts the material that the team used to make adsorbents that remove microplastics and dissolved pollutants from water.

How does this innovation work?

The researchers have developed an adsorbent using nanomaterials that they can mix into water to attract microplastics and dissolved pollutants.

Muhammad Haris, the first author and PhD candidate from the School of Engineering, said the nanomaterials contained iron, which enabled the team to use magnets to easily separate the microplastics and pollutants from the water.

“This whole process takes one hour, compared to other inventions taking days,” he said.

“The adsorbent is prepared with special surface properties so that it can effectively and simultaneously remove both microplastics and dissolved pollutants from water,” said Mahmood from the School of Science.

“Microplastics smaller than 5 millimetres, which can take up to 450 years to degrade, are not detectable and removable through conventional treatment systems, resulting in millions of tonnes being released into the sea every year. This is not only harmful for aquatic life, but also has significant negative impacts on human health.”

The team received scientific and technical support from the Microscopy and Microanalysis Facility and the Micro Nano Research Facility, part of RMIT’s newly expanded Advanced Manufacturing Precinct, to complete their research. 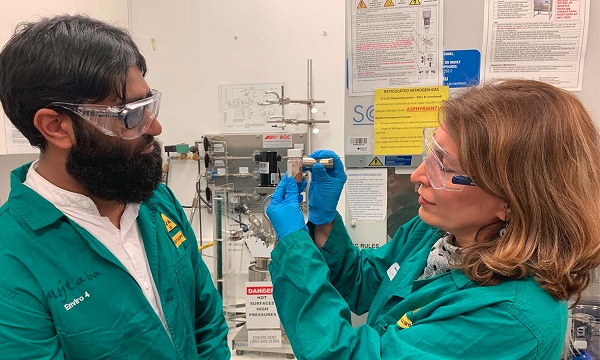 PhD candidate Muhammad Haris and Professor Nicky Eshtiaghi (left to right) with the magnetic material that they developed into adsorbents that remove microplastics and dissolved pollutants from water.

What are the next steps?

Developing a cost-effective way to overcome these significant challenges posed by microplastics was critical, Eshtiaghi said.

“Our powder additive can remove microplastics that are 1,000 times smaller than those that are currently detectable by existing wastewater treatment plants,” she said.

“We are looking for industrial collaborators to take our invention to the next steps, where we will be looking at its application in wastewater treatment plants.”

Eshtiaghi and her colleagues have worked with various water utilities across Australia, including with Melbourne Water and Water Corporation in Perth on a recent Australian Research Council Linkage project to optimise sludge pumping systems.