A newly discovered technique, reported in the journal Nanoscale, offers a low-cost way to enhance the effectiveness of existing drugs.

“If you take sand and heat it to 500 degrees Celsius, nothing changes,” said Bradley Smith, the Emil T. Hofman Professor of Science at the University of Notre Dame. So Smith, who is also the director of Notre Dame’s Integrated Imaging Facility, was puzzled when Canjia Zhai and Cassandra Shaffer, two doctoral students in the Department of Chemistry and Biochemistry who were working in his lab, discovered they had changed the structure of particles of silica — the main component of sand — at 80 degrees Celsius, a temperature similar to that of a cup of coffee.

The discovery happened by accident. The particles were microscopically small — a thousandth the diameter of a human hair. But like their larger counterparts marked “silica gel” in packages attached to new articles of clothing, these particles were porous and could retain a chemical. In this case, that chemical was a blue dye used to detect tumors in mice. 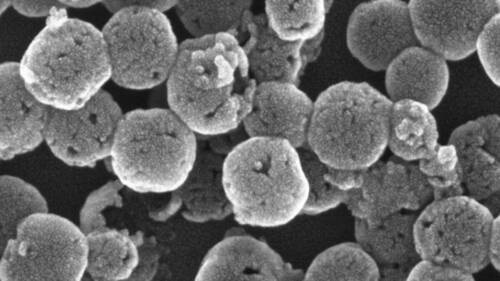 The new dye, which had been developed in Smith’s lab, was taking a long time to enter the narrow pores in the particles. So, to make the molecules move more quickly, Shaffer and Zhai warmed the mixture to just under boiling and left it overnight. When they returned the next day, they could see that the particles had turned blue.

To confirm that the dye had fully infused, Shaffer and Zhai enlisted the help of Tatyana Orlova and Maksym Zhukovskyi, microscopy experts at the Notre Dame Integrated Imaging Facility.

Orlova and Zhukovskyi produced high-resolution electron microscopy images that showed that not only had the dye infused, the silica particles themselves had changed shape. The original particles were solitary spheres lightly dotted with pores like the skin of an orange. The new structures were spherical and were composed of smaller dye-filled globules. They also had small openings here and there that revealed a hollow core inside. The overall unit resembled a hollow raspberry. 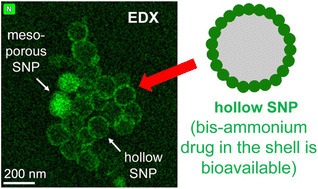 After the surprise of the initial discovery came a number of practical questions. What other chemicals could the researchers load into similar raspberry-shaped particles? And, most importantly, would those chemicals remain active even after their surrounding structures had changed shape?

Fellow doctoral student Chasteen took up these questions, repeating the process using a cancer drug. After a series of tests, he confirmed that the cancer drug loaded into the particles was still active and capable of killing cancer cells.

“What we have now is a way to go through the whole catalog of amine-containing drugs, and by following the simple steps we have discovered, we can create new versions of existing drugs that could be more effective or have fewer unwanted side effects,” he said.

Smith and his students have found that subtle changes in the loading procedure allow them to vary the thickness of the particles, offering a whole host of new options to fine-tune the particles to release drugs at different rates. The new particle’s unique structure may also make it possible to load it with more than one ingredient — for example, a drug in the outer layer and a dye inside the “raspberry” — to enhance researchers’ ability to observe the way drugs release.

“We have found that amine-containing drugs have certain chemical attributes that speed up the degradation and reforming process in silica, and we think that it is similar to what goes on in nature,” he said. Smith mentioned as an example diatoms, a kind of microscopic plankton, and their delicate glass-like shells formed from silica.

“These microorganisms have mechanisms that allow them to take sand and remodel it into their shells,” he said. “And they clearly do it at relatively low temperature using organic molecules. What we have discovered is potentially some of the chemistry behind that process.”

As Smith and his lab continue to innovate, they are gaining inspiration both from nature and from discoveries in the lab. “The broad lesson here,” he said, “is that we can discover in the lab how natural processes work, and then we can use that knowledge and mimic those processes to design something completely new.”

This discovery was made possible with funding from the National Science Foundation and the National Institutes of Health.

Read the original article on University of Notre Dame.