UbiQD, Inc., a New Mexico-based advanced materials company, announced today that it was recently awarded a new small business contract by NASA, the United States National Aeronautics and Space Administration, for optimization and scale up of extruded UbiGro greenhouse films for boosting crop yield in both space and terrestrial applications.

The new NASA contract leverages matching funds that were provided by private investors. Additionally, the United States Patent and Trademark Office (USPTO) has granted the company a key patent on its greenhouse technology.

"Our UbiGro Inner product, which installs under the roof, has been popular with growers having shown great productivity enhancements, and now our team is excited to roll out a full-cover product, called UbiGro Cover," said Matt Bergren, Chief Product Officer at UbiQD. "The progress that we're making on extruded films is enabling a whole new class of products for the controlled environment agriculture industry." 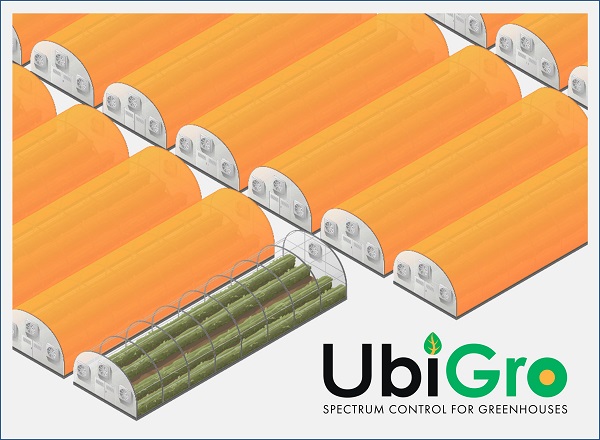 Schematic of UbiGro Cover, a new product that leverages twin-screw extrusion to incoroporate fluoresent quantum dots into the roofing of greenhouses. UbiGro Cover 590 (orange) is launching for pilot projects in early 2023.

UbiGro Cover utilizes a novel quantum dot (QD) polymer system developed by UbiQD that led to multiple orders of magnitude improved fluorescence sunlight durability. Historically, nanomaterials have struggled to survive the high temperatures needed for twin-screw compounding and blown film extrusion. These QD films maintain high light-conversion efficiency exceeding 90% over thousands of hours of accelerated aging. Plant trials are underway, and the benefits are expected to be as good or better than those seen with UbiGro Inner. The work builds on previous NASA funding, and may also benefit other applications, including solar.

Additionally, UbiQD patent application US16/612,344 by Bergren et al and titled, "Luminescent optical elements for agricultural applications" (May 2017 priority date) has been allowed by the USPTO. A number of other global patent applications in this field are pending for UbiQD.

"We're grateful to have the continued support of NASA and investors, particularly at a time when our patent portfolio is expanding and the industry is urgently needing energy efficiency," said Hunter McDaniel, UbiQD Founder and CEO. "Growers have been asking for UbiGro Cover, and we're excited to deliver."