The synthetic production of a critical building block called methanediamine for the first time by researchers in University of Hawaiʻi at Mānoa’s Department of Chemistry could lead to key insights into the origins of life. The researchers have discovered a method to produce it in a lab under conditions that mimic icy interstellar nanoparticles in cold molecular clouds in space.

Nitrogen is the most abundant element in Earth’s atmosphere. It is also incorporated into nearly one-third of some 300 molecules identified in the interstellar medium, which is the material that exists in the space between the stars in a galaxy.

Most nitrogen-containing molecules in deep space carry exclusively the nitrile moiety (organic compound that has a carbon, nitrogen functional group), while amines (a member of a family of nitrogen-containing organic compounds that is derived from ammonia) and imines (compounds containing a carbon-nitrogen double bond) are relatively rare. According to experts, an understanding of the origin of these less common molecule parts in deep space is central to the hypothesis for the origin of life because all nucleobases (nitrogen-containing compounds) found in contemporary RNA and DNA contain amines and imines. 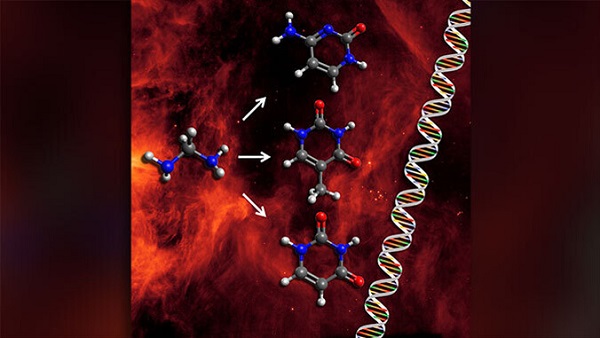 Conceptualization of the role of methanediamine in the galactic cosmic ray mediated synthesis of DNA and RNA bases in deep space.

The team, consisting of Professor Ralf I. Kaiser, postdoctoral fellows Joshua H. Marks and Jia Wang at UH Mānoa’s W. M. Keck Research Laboratory in Astrochemistry and computational chemist Professor Ryan C. Fortenberry from the University of Mississippi, used low-temperature interstellar analog ices composed of ammonia and methylamine, and exposed them to energetic electrons which act as proxies for galactic cosmic rays. These conditions simulate the environment within cold molecular clouds. The researchers were able to identify methanediamine subliming from the ice.

“The discovery of this unusual molecule in such an extreme environment shows us that molecular clouds are home to new types of chemistries not previously considered,” Marks said.

Kaiser added, “Space simulation experiments exploiting modern laser tools will be critical to decipher the abiotic processes leading to molecular precursors of complex biomolecules in deep space. These studies have just scratched the surface, and research in the next decade is expected to unravel a plethora of biorelevant molecules, in particular those exotic organics which are assumed not to exist on Earth.”

Read the original article on University of Hawaiʻi.