Scientists from St Petersburg University together with their foreign colleagues are the first in the world to synthesise graphene with a ferrimagnetic order − opposite magnetizations on its sublattices. The use of the obtained magnetic state of graphene can open a new approach to electronics, increasing its energy efficiency and speed in the development of devices that use alternative technologies without the use of silicon.

Graphene, a two-dimensional modification of carbon, is the lightest and strongest of all two-dimensional materials available today, and is also highly conductive. In 2018, researchers from St Petersburg University, together with their colleagues from Tomsk State University and German and Spanish scientists were the first in the world to modify graphene and give it the properties of cobalt and gold − magnetism and spin-orbit interaction (between the moving electron in graphene and its own magnetic moment). When interacting with cobalt and gold, graphene not only retains its unique characteristics, but also partially takes on the properties of these metals − magnetism and spin-orbit interaction. 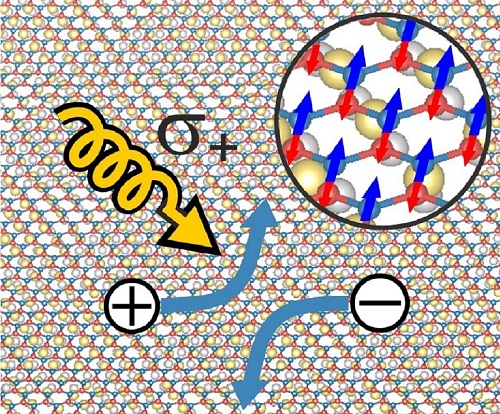 Graphic diagram depicting the Hall effect in the system under investigation.

As part of the new work, the scientists synthesised a system with a ferrimagnetic state of graphene. It is a unique state in which the substance has magnetization in the absence of an external magnetic field. The physicists used a similar substrate made from a thin layer of cobalt and an alloy of gold on its surface.

During surface alloying, dislocation loops were formed under graphene. These loops are triangular regions with a lower density of cobalt atoms to which the gold atoms have moved closer. Until now, it was known that single-layer graphene could only be fully magnetized in a uniform way. However, studies by the scientists from St Petersburg University have shown that it is possible to control the magnetization of the atoms of individual sublattices through selective interaction with the structural defects of the substrate.

‘This is a significant discovery, as all electronic devices use electrical charges and involve heat generation when current flows. Our research will eventually allow information to be transmitted in the form of spin currents. This is a new generation of electronics, a fundamentally different logic and a new approach to technology development that reduces power consumption and increases the speed of information transfer,’ explained Artem Rybkin, Principal Investigator of the research, Leading Research Associate in the Laboratory of Electronic and Spin Structure of Nanosystems at St Petersburg University.

The second important characteristic of the graphene synthesised by the physicists from St Petersburg University is the strong spin-orbit interaction. In this structure, the strengthening of this interaction is explained by the presence of gold atoms under graphene. At a certain ratio of the magnetic and spin-orbit interaction parameters, it is possible to move from the trivial, i.e. familiar, state of graphene to a novel, topological one.