Researchers have successfully detected terahertz waves with a fast response and high sensitivity at room temperature.

On the electromagnetic spectrum, which comprises everything from radio waves to X-rays and gamma rays, there exists a deadzone where conventional electronic devices can hardly operate. This deadzone is occupied by terahertz waves.

With wavelengths of approximately 10 micrometers to 1 millimeter, terahertz waves are unique amongst electromagnetic waves. Their vibration frequency overlaps with the molecules that make up matter, and they allow for the detection of substances, since almost every molecule operating in the terahertz band has a fingerprint spectrum.

Technologies capable of harnessing the power of terahertz waves will have massive ramifications for the development of spectroscopy, imaging, and 6G and 7G technologies.

Now, a research team has successfully detected terahertz waves with a fast response and high sensitivity at room temperature. The team was led by Associate Professor Akira Satou, from Tohoku University's Research Institute of Electrical Communication (RIEC), and Hiroaki Minamide, from the RIKEN Center for Advanced Photonics (RAP).

Details of their breakthrough were published online as a Featured Article in APL Photonics (impact factor: 6.449 by SCOPUS), an open access international journal published by the American Institute of Physics, on December 2, 2022. Featured Articles are ones deemed by the editors to be the journal's best.

Graphene, a monoatomic layer material of carbon atoms crystallized in a honeycomb lattice, has long been seen as the answer to achieving fast-response and high-sensitivity terahertz wave detectors capable of operating at room temperature. But terahertz waves' unique properties make this difficult.

Photothermoelectric detection, which utilizes the electromotive voltage effect generated by the spatial thermodiffusion of electrons and holes heated by the absorption of electromagnetic waves, is also known for being able to quickly and sensibly detect terahertz waves. However, current photothermoelectric detectors have a complex bipolar structure, requiring the two electrodes in the detector to be made out of different materials. This makes it challenging to achieve both high performance and mass production. 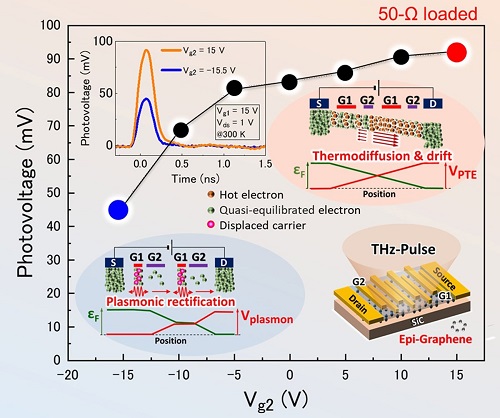 The group's success was accomplished thanks to a new principle that enabled the detection operation even within the simplest transistor device.

"We used a unipolar type transistor with graphene where only electrons were involved," said Satou. "Additionally, the same type of metals can be employed for all electrodes."

Looking ahead, Satou and his team plan to build upon their epoch-making achievement by improving the device performance. 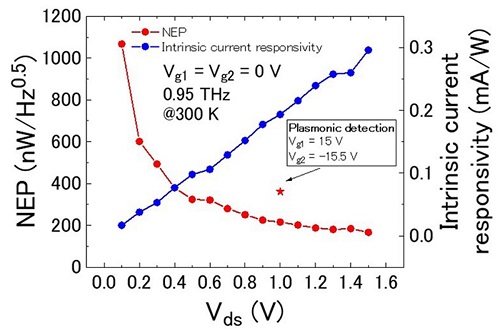