Currently, the intrinsic functionalisation of bio-inspired soft robots is based on elastomeric materials such as silica gel, which requires introducing bulky components and extensive processing steps. They have major limitations in their extent of deformability as compared to their natural biological counterparts.

A research team led by Professor Anderson H.C. Shum from the Department of Mechanical Engineering at the University of Hong Kong (HKU) and Professor Thomas P. Russell from Lawrence Berkeley National Laboratory has invented an all-water robotic system that resolves these constraints through revolutionary scientific advances. 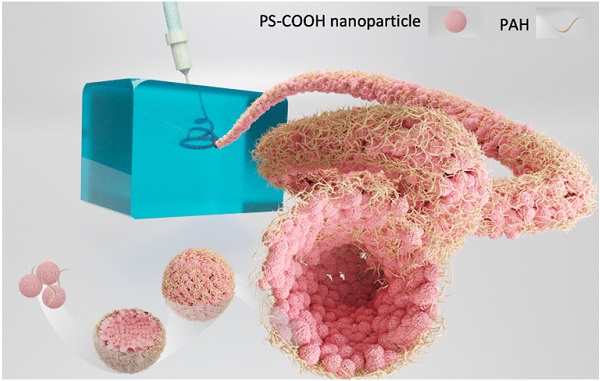 They created ‘Aquabots’, a new class of ultrasoft liquid robots comprised predominantly of water. The microscale vascular structures are printed on all-liquid 3D printing technology with an interfacial assembly of an aqueous two-phase system, which helps separate the two distinct water-based polymers.

The study is now published in ACS NANO. The Aquabot with its micrometre-scale multicompartmental structures is featured as the supplementary cover of the Journal.

“Our idea was to assemble the materials in such a way that the interface and structure captured the shape of the liquids. The shapes are dictated by external forces such as magnetic forces and form arbitrary shapes, or are made through the use of all-liquid 3D printing,” Professor Shum and Russell indicated.

While the shapes can be produced using all-liquid 3D printing, the multicompartmental building blocks in Aquabots measure on a micrometre scale and are beyond printing resolution. They are self-assembled through aqueous phase separation, where a single homogeneous mixture yields two liquid phases. This helps produce the building blocks in Aquabots that overcome the deformability obstacle.

The membrane of these structures is easily functionalised, which is key for various pharmaceutical applications.

Aquabots are smooth in their movements. They have a soft tactile nature and the ability to load active ingredients (e.g., drugs, catalysts, enzymes, etc.) and manipulation components (e.g., magnetic nanoparticles) inside the structure as well as on its membrane. They can easily encapsulate drugs through their bio-inspired compartmental structures and navigate narrow and tortuous spaces for drug delivery within the human body.

Aquaboats can also change shape to fit different dimensions and grip objects. The deformability has usually been a challenge for scientists and medical experts, as sometimes, the robots would get stuck in the middle before reaching the target sites during drug delivery.

“The robots are fully aqueous, with water inside and outside them. They are easily functionalised to be biocompatible, so it is not hard to imagine their vast bio-applications, i.e., within the body, where such constructs could be of use,” said Professor Russell.

The researchers are optimistic that Aquabots, demonstrated to be biocompatible, multicompartmental, and multifunctional, could pave the way for the advancement of extensive real-world biomedical applications, including medical micromanipulation, targeted cargo delivery, tissue engineering, and biomimetics.

The research team is further looking to incorporate biocompatible and biodegradable hydrogels into the assembly of Aquabots. Fully reversible changes in shape can potentially be achieved given the adaptive nature of hydrogels.

“In our next work, it would be worth looking into other properties and functions enabled by the Aquabot platform along with the mechanical manipulation and chemical reactions demonstrated in the paper,” said Professor Shum.

“For example, we are attempting to make Aquabots electrically conductive by integrating water-soluble conductive polymers. It would be interesting to combine this with other microfluidic and robotic approaches for new applications, such as building biologically electrical circuits and logically ion-selective channels.” He added.

Read the original article on University of Hong Kong.