Structures made out of building blocks can shift their shape and autonomously self-organize to a new configuration. The physicists Saeed Osat and Ramin Golestanian from the Max Planck Institute for Dynamics and Self-Organization (MPI-DS) revealed this mechanism which may be used to actively manipulate molecular organization. A seed of the novel desired configuration is sufficient to trigger reorganization. This principle can be applied on to biological building blocks which are constantly recycled to form new structures in living systems.

The concept of remodeling is familiar to most people: those who have ever played with Lego bricks know that many combinations and structures possible from the same components. Typically, an attached manual describes the arrangement of the individual blocks and the shape of the final structure. Initially assembling only a few pieces can thereby already determine the way all other parts have to be attached. “Our model describes the rearrangement of building blocks in physical systems from a given structure”, explains Saeed Osat, the first author of the study. “If only a few pieces in a given structure are changed, they function as a seed that results in an entirely new composition.” 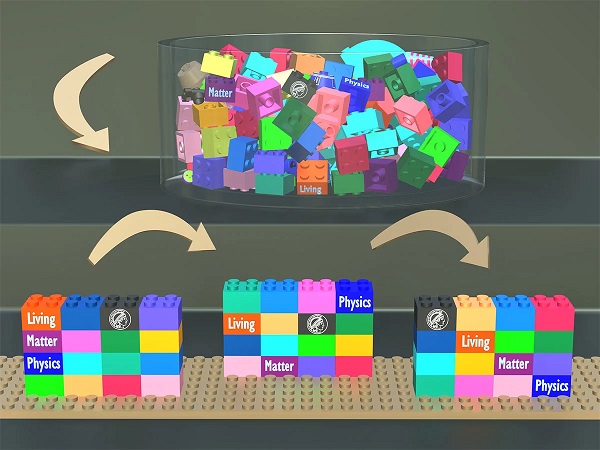 A set of building blocks can be spontaneously rearranged to form a new structure with a novel configuration.

Like in a Lego manual, there are certain rules on how the blocks need to be arranged. In the researcher’s model, the instructions for assembly are derived from a list of possible molecular interactions. These depend on the energy state of the system, the size of the seed and the non-reciprocal interactions between the components. “Under certain conditions, we can then observe multifarious reorganization into new shapes”, explains Ramin Golestanian, head of the Living Matter Physics department and director at the MPI-DS. “We identified a new learning rule which causes structures to dynamically shift their shape, depending on the non-reciprocal interactions between their parts”, he summarizes the results of the study.

In biology, rearrangement of building blocks happens constantly. Instead of disposing complex structures as a whole, they are disassembled into their individual parts which are used to build new compositions. The model may thus help to understand the principles of self-organization in living matter. Likewise, the principle of non-equilibrium synthetic and autonomous self-assembly may be useful in devising engineering strategies to design molecular robotic shape-shifters.