Zhang and Bonagiri explain that the core of electrochemistry is the interconversion between electrical and chemical energy at the electrode-electrolyte interface and such processes require the accumulation and depletion of charges at the interface. The spatial charge distribution is therefore a key to understanding the mechanisms of electrochemical processes. However, charge density profiles at these interfaces have remained a puzzle.

The team used an ionic liquid, 1-ethyl-3-methylimidazolium bis(trifluoromethylsulfonyl)imide (EMIM-TFSI), as the choice of electrolyte, on a highly oriented pyrolytic graphite (HOPG) electrode. Both EMIM-TFSI and HOPG are model systems used in energy storage devices and supercapacitors. They also used another type of emergent electrolyte: water-in-salt (WiS), which is composed of highly concentrated salt in aqueous solution (salt outnumbers the solvent). WiS electrolytes were first introduced in 2015 and since then, they have been widely explored as a viable option to make batteries with enhanced safety and reduced environmental impacts. 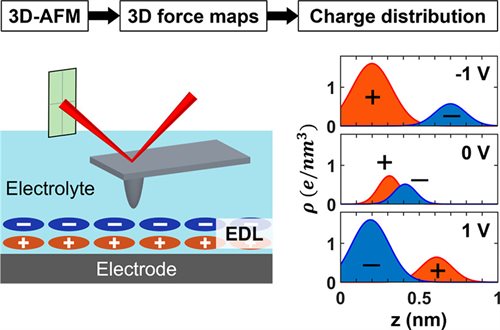 Schematic of the CP-3D-AFM technique.

The experimental technique used in this research is based on what the team has used previously, but with newly developed data analysis methods. As Bonagiri puts it, “We took that technique [EC-3D-AFM] to the next level where we deconvolute count histograms and obtain the charge density profiles using electrostatic algorithms.”

This new method, named CP-3D-AFM, enables the acquisition of spatial charge distribution of both the local electrode surface and EDLs. The team used CP-3D-AFM to determine the charge rearrangements of ionic liquid/HOPG and WiS/HOPG interfaces and observed sub-nanometer variations in charge density, which is crucial for capacitive energy storage and other electrochemical functions of these systems. Zhang and Bonagiri say this method will be broadly applicable to a large range of practical electrochemical devices including batteries, fuel cells, electrolyzers, and supercapacitors.