A team of engineers and neuroscientists has demonstrated for the first time that human brain organoids implanted in mice have established functional connectivity to the animals’ cortex and responded to external sensory stimuli. The implanted organoids reacted to visual stimuli in the same way as surrounding tissues, an observation that researchers were able to make in real time over several months thanks to an innovative experimental setup that combines transparent graphene microelectrode arrays and two-photon imaging.

The team, led by Duygu Kuzum, a faculty member in the University of California San Diego Department of Electrical and Computer Engineering, details their findings in the Dec. 26 issue of the journal Nature Communications. Kuzum’s team collaborated with researchers from Anna Devor’s lab at Boston University; Alysson R. Muotri’s lab at UC San Diego; and Fred H. Gage’s lab at the Salk Institute.

Human cortical organoids are derived from human induced pluripotent stem cells, which are usually derived themselves from skin cells. These brain organoids have recently emerged as promising models to study the development of the human brain, as well as a range of neurological conditions. 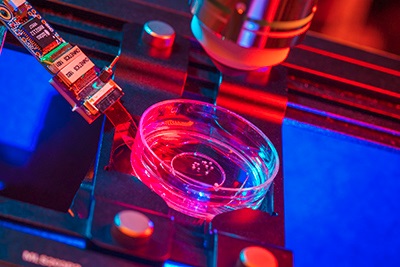 The researchers developed experiments that combine microelectrode arrays made from transparent graphene, and two-photon imaging, a microscopy technique that can image living tissue up to one millimeter in thickness.

But until now, no research team had been able to demonstrate that human brain organoids  implanted in the mouse cortex were able to share the same functional properties and react to stimuli in the same way. This is because the technologies used to record brain function are limited, and are generally unable to record activity that lasts just a few milliseconds.

The UC San Diego-led team was able to solve this problem by developing experiments that combine microelectrode arrays made from transparent graphene, and two-photon imaging, a microscopy technique that can image living tissue up to one millimeter in thickness.

“No other study has been able to record optically and electrically at the same time,” said Madison Wilson, the paper’s first author and a Ph.D. student in Kuzum’s research group at UC San Diego. “Our experiments reveal that visual stimuli evoke electrophysiological responses in the organoids, matching the responses from the surrounding cortex.” 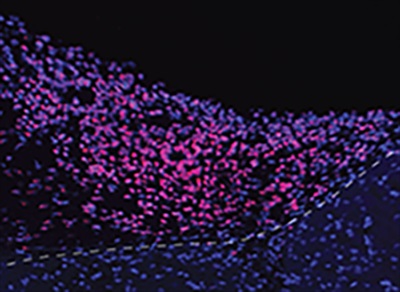 Researchers were able to detect and image the border between a transplanted human brain organoid and mouse brain.

The researchers hope that this combination of innovative neural recording technologies to study organoids will serve as a unique platform to comprehensively evaluate organoids as models for brain development and disease, and investigate their use as neural prosthetics to restore function to lost, degenerated or damaged brain regions.

By placing an array of these electrodes on top of the transplanted organoids, researchers were able to record neural activity electrically from both the implanted organoid and the surrounding host cortex in real time. Using two-photon imaging, they also observed that mouse blood vessels grew into the organoid providing necessary nutrients and oxygen to the implant.

Researchers applied a visual stimulus–an optical white light LED–to the mice with implanted organoids, while the mice were under two-photon microscopy. They observed electrical activity in the electrode channels above the organoids showing that the organoids were reacting to the stimulus in the same way as surrounding tissue. The electrical activity propagated from the area closest to the visual cortex in the implanted organoids area through functional connections. In addition, their low noise transparent graphene electrode technology enabled electrical recording of spiking activity from the organoid and the surrounding mouse cortex. Graphene recordings showed increases in the power of gamma oscillations and phase locking of spikes from organoids to slow oscillations from mouse visual cortex.  These findings suggest that the organoids had established synaptic connections with surrounding cortex tissue three weeks after implantation, and received functional input from the mouse brain. Researchers continued these chronic multimodal experiments for eleven weeks and showed functional and morphological integration of implanted human brain organoids with the host mice cortex. 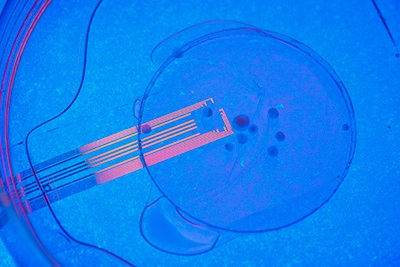 The researchers observed electrical activity in the electrode channels above the organoids showing that the organoids were reacting to the stimulus in the same way as surrounding tissue.

Next steps include longer experiments involving neurological disease models, as well as incorporating calcium imaging in the experimental set up to visualize spiking activity in organoid neurons. Other methods could also be used to trace axonal projections between organoid and mouse cortex.

“We envision that, further along the road, this combination of stem cells and neurorecording technologies will be used for modeling disease under physiological conditions; examining candidate treatments on patient-specific organoids; and evaluating organoids’ potential to restore specific lost, degenerated or damaged brain regions,” Kuzum said.