A team of Pakistani scientists developed fluorescent nanoparticles from spent tea through an eco-friendly procedure. These nanoparticles could act like sensors in various medical applications.

Aumber Abbas – a PhD scholar at the Newcastle University, UK and others from Oxford University UK, made this discovery by converting tea waste into Graphene Quantum Dots (GQDs) to design a highly selective sensor to detect iron in drinking water and Parkinson’s patients.

The tiny particles are made from graphene – an allotrope of Carbon discovered in 2004 – consist of a sheet of carbon atoms that could be collected from a piece of graphite with scotch tape. The discovery of this magic material was awarded the Nobel Prize. Till then, graphene is an ideal material for new explorations in material science, medicine and other fields. 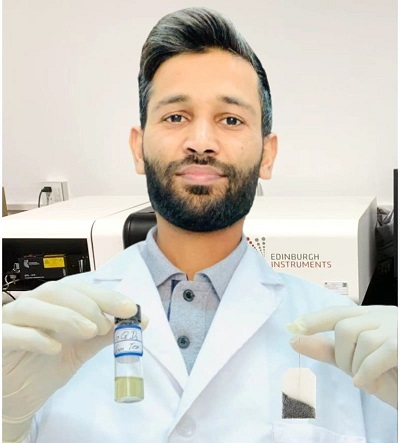 Scientists and engineers around the world are still busy in fine-tuning graphene for desirable results. For instance, in March 2018, Pablo Jarillo-Herrero at the Massachusetts Institute of Technology (MIT) found that when a one-atom-thick sheet of graphene placed on another with slight twist, the material shows super conductivity. Similarly, the quest for fluorescence in GQDs led the team to do some more tweaks.

The team wanted to glow the particles, but graphene has no bandgap or energy gap. Abbas and colleagues however successfully tried another way to solve this problem.

“One of the challenges with graphene is zero bandgap that limits its optical emission and applications in fluorescence field. To this end, I solved this challenge by cutting graphene sheet into small pieces and hence introducing bandgap in it. As a result, small pieces of graphene started fluorescing,” Aumber Abbas told The Express Tribune, adding that our main aim was to develop low cost advanced material, therefore we started from a waste ‘used black tea’.

Black tea waste was first converted into black char by heat treatment at 500 °C. The obtained char was further treated in a high pressure closed vessel at 200-250 °C in presence of a chemical (Oxone). After completion of reaction, the mixture was filtered to separate the small pieces of graphene. The filtrate liquid contained the nanosised graphene sheets which started fluorescing. Now, the dots are able to produce fluorescence which shows that a bandgap is produced in the material. So, the team successfully modified the GQDs into a viable sensing stuff.

In the next step scientists confirmed the structure, size, quality and other characteristics of the nanodots by using state of the art instruments like Transmission (and High Transmission) electron microscopy (TEM), Atomic force microscopy (AFM) and Fourier-transform infrared (FTIR) spectroscopy.

The entire standard test shows that a single dot is in 1 to 5 nanometers in size with a thickness of one nanometer. They are so tiny that a one billion such dots will fit back-to-back in one-meter single line drawn on a sheet and this is why they called, nano – one billionth of a meter – particles.

Now, the GQDs are able to detect the presence of iron or its states based on their strong luminescence of blue color and turned into a sensor. The presence of iron instantly switches off the fluorescence of GQDs. The Graphene Quantum Dots were tested for 17 different metals ions dissolved in solution and they showed highest switching off response in the presence of Iron. Thus they have a promising future of iron detection in biological or environmental system.

We know that abnormal iron buildup in brain increases the cognitive decline and could lead to Alzheimer disease. Iron accumulation is also harmful in water and environmental systems. The newly devised GQDs could be vital to detect Iron in many applications.

On the other hand, the particles are made with green, acid free and cost-effective approach with raw material which is abundant – the used tea.

The findings are published in Nanomaterials -- an open-source research publication.

Read the original article on The Express Tribune.