Researchers at North Carolina State University have developed a stretchable strain sensor that has an unprecedented combination of sensitivity and range, allowing it to detect even minor changes in strain with greater range of motion than previous technologies. The researchers demonstrated the sensor’s utility by creating new health monitoring and human-machine interface devices.

“And measuring strain is useful in many applications, such as devices that measure blood pressure and technologies that track physical movement,” says Yong Zhu, corresponding author of a paper on the work and the Andrew A. Adams Distinguished Professor of Mechanical and Aerospace Engineering at NC State. 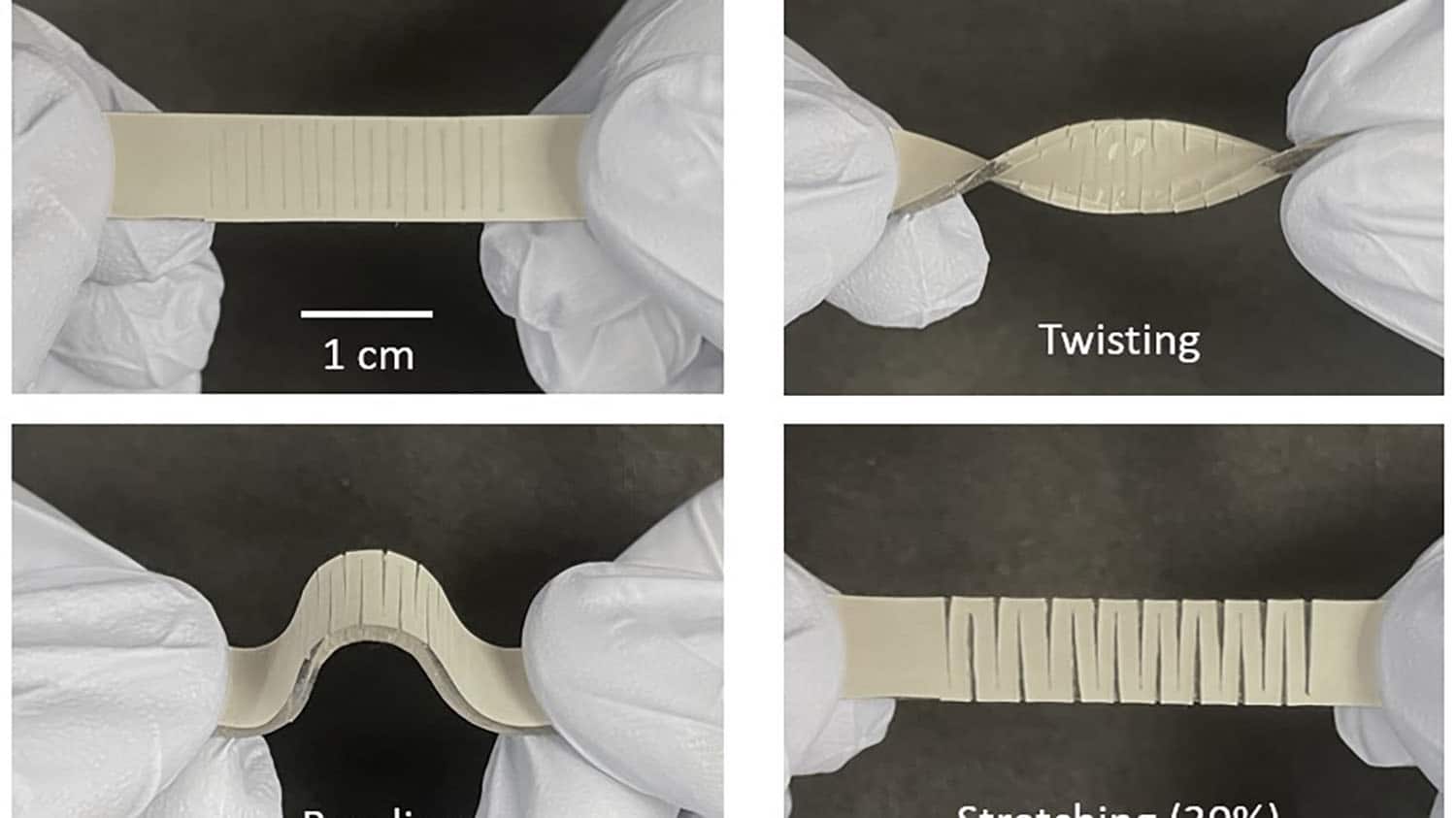 “But to date there’s been a trade-off. Strain sensors that are sensitive – capable of detecting small deformations – cannot be stretched very far. On the other hand, sensors that can be stretched to greater lengths are typically not very sensitive. The new sensor we’ve developed is both sensitive and capable of withstanding significant deformation,” says Zhu. “An additional feature is that the sensor is highly robust even when over-strained, meaning it is unlikely to break when the applied strain accidently exceeds the sensing range.”

“This feature – the patterned cuts – is what enables a greater range of deformation without sacrificing sensitivity,” says Shuang Wu, who is first author of the paper and a recent Ph.D. graduate at NC State.

The sensor measures strain by measuring changes in electrical resistance. As the material stretches, resistance increases. The cuts in the surface of the sensor are perpendicular to the direction that it is stretched. This does two things. First, the cuts allow the sensor to deform significantly. Because the cuts in the surface pull open, creating a zigzag pattern, the material can withstand substantial deformation without reaching the breaking point. Second, when the cuts pull open, this forces the electrical signal to travel further, traveling up and down the zigzag.

“To demonstrate the sensitivity of the new sensors, we used them to create new wearable blood pressure devices,” Zhu says. “And to demonstrate how far the sensors can be deformed, we created a wearable device for monitoring motion in a person’s back, which has utility for physical therapy.”

“We have also demonstrated a human-machine interface,” Wu says. “Specifically, we used the sensor to create a three-dimensional touch controller that can be used to control a video game.”

“The sensor can be easily incorporated into existing wearable materials such as fabrics and athletic tapes, convenient for practical applications,” Zhu says. “And all of this is just scratching the surface. We think there will be a range of additional applications as we continue working with this technology.”

The paper, “Highly Sensitive, Stretchable, and Robust Strain Sensor Based on Crack Propagation and Opening,” is published in the journal ACS Applied Materials & Interfaces. The paper was co-authored by Katherine Moody, a Ph.D. student at NC State; and by Abhiroop Kollipara, a former undergraduate at NC State.