Humidity May Be the Key to Super-lubricity 'Switch'

Sometimes friction is good, such as the friction between a road and a car’s tires to prevent the vehicle from skidding. But sometimes friction is bad — if you did not put oil in that very same car, there would be so much friction in the bearings of the engine that the car could not operate.

A material state known as super-lubricity, where friction between two contacting surfaces nearly vanishes, is a phenomenon that materials researchers have studied for years due to the potential for reducing the energy cost and wear and tear on devices, two major drawbacks of friction. However, there are times when friction is needed within the same device, and the ability to turn super-lubricity on and off would be a boon for multiple practical engineering applications. 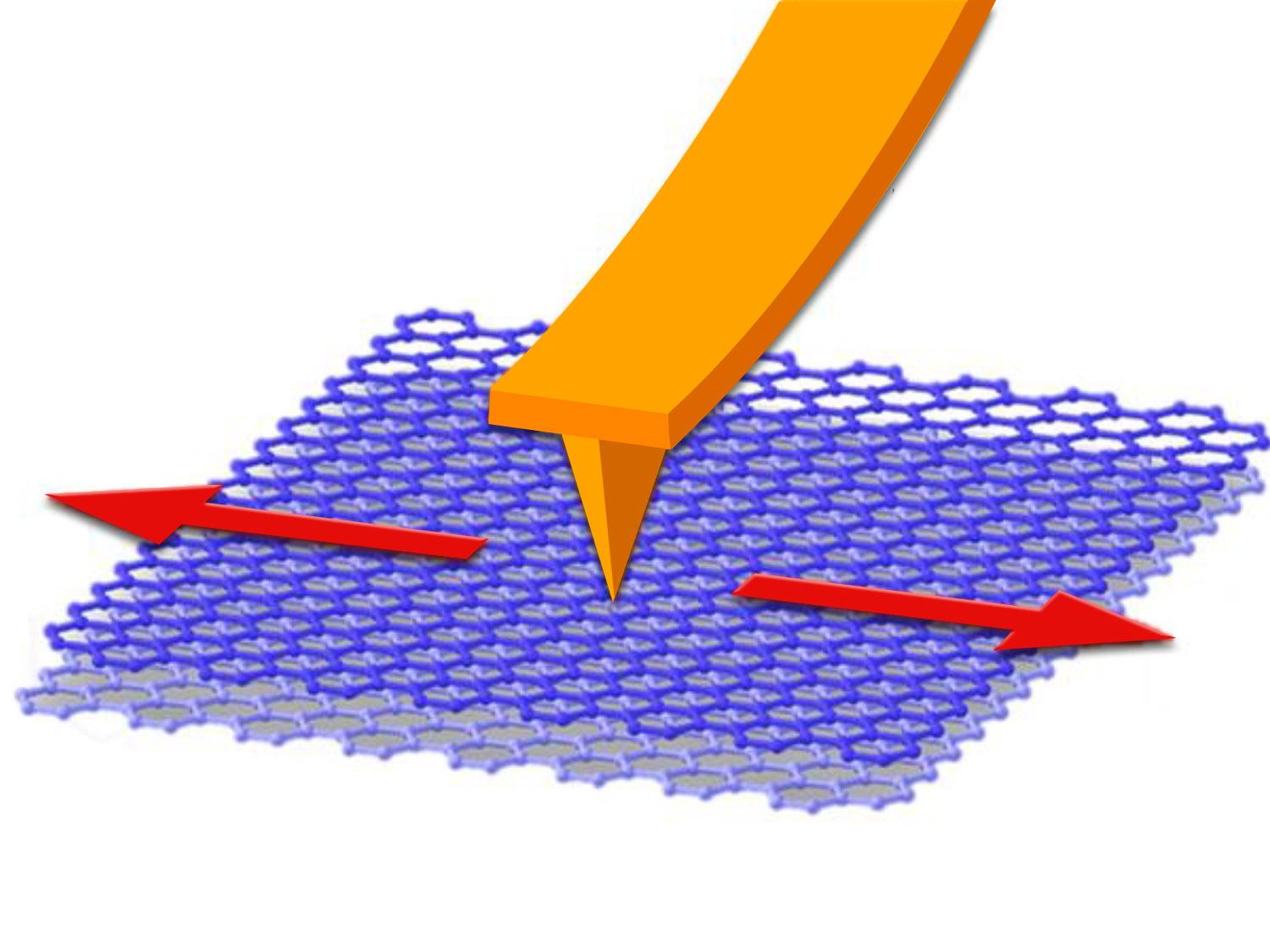 Schematic illustration of the atomic force microscopy-based (AFM) nanoscale friction test setup. A silicon AFM probe (covered with native oxide) slides on the graphite (0001) basal plane. The normal load between the silicon tip and the graphite surface is applied via bending the cantilever. While the probe is moving along the red arrows, the cantilever twists due to the friction force at the contact point between the silicon tip and the graphite surface. The degree of the twisting reflects the magnitude of the friction force. Gas molecules impinging from the environmental phase adsorb to the silicon tip surface and influence the interfacial friction.

Seong Kim, distinguished professor of chemical engineering and associate head of the Department of Chemical Engineering at Penn State, and Zhe Chen, a researcher with the State Key Laboratory of Fluid Power and Mechatronic Systems and the Department of Mechanical Engineering at Zhejiang University, proposed in a study in Applied Materials Today that this super-lubricity switch may be found in humidity. Specifically, water vapor and vapor in phenol, which is a family of organic compounds.

Super-lubricity is a key characteristic of certain two-dimensional (2D) materials, which consist of a single layer of atoms, especially graphene and molybdenum disulfide. Graphene is often used as a solid lubricant, in the form of a coating on various materials such as metals and plastics. With graphene, the atoms are oriented in a hexagonal manner, which forms this mountain-and-valley landscape, much like a supermarket egg crate.

“When you go to the store to buy the 36-egg crate, you have peaks and valleys, a highly corrugated structure,” Kim said. “If you put two egg crates on top of each other so the lattices are facing and matching, it is extremely hard to slide over each other as the peaks of one is in the valley of the other. But if you rotate the one a bit so the peaks do not go into the valleys, they can slide very easily and therefore graphene can have super-lubricity.”

Cutting friction down to near zero is a boon for lessening wear and tear on mechanical devices and for saving energy. But it can also be something undesirable.

"Because the friction causes about 25% to 30% of the energy loss in trucks and automobiles, and can wear down machine parts, eliminating it can be good,” Kim said. “However, you can imagine that if we remove the friction completely, we do not have any traction. If we do not have any traction, then that makes a vehicle or other machine extremely difficult to control its motion.”

This makes the ability to turn super-lubricity on and off important; however, it long has been considered something that is extremely difficult to do, even impossible. Recently, this super-lubricity became thought of as more possible, with ideas involving mechanical force, exposure to light, etc. as potential ways to turn it off and on.

However, Kim and his team have found promising results by altering the environment, namely, making it more humid via water and phenol vapor.

They used a silicon oxide probe on a graphite basal plane to demonstrate how this might be possible. Silicon is commonly used in microelectromechanical systems (MEMS) that have tiny moving parts and are used in devices such as the accelerometers found in Apple Watches and cellphones to measure speed.

The researchers found that the nanoscale super-lubricity between the silica tip and the graphene surface can be tuned by adsorption of different molecules from the environment. They discovered that super-low friction can be increased 25 times by water vapor and 45 times by phenol vapor. When the water is adsorbed on a silica surface, it forms a nanostructure similar to the structure it has in its solid state, ice.

"When we increase the humidity, water is on the silicon dioxide surface,” Kim said. “We can rearrange the structure in a way that the ice lattice matches with the graphite lattice. The atomic corrugation matches each other, then the friction goes up. This study suggests that if we could produce a way to control the material's surface humidity, that would enable the silica to slide on top of the graphite surface in a more engineered way. Once we do that, then we can turn super-lubricity on and off.”

Among the next steps for this research would be improving the process to enable practical applications for this technique. Kim notes that while a large-scale macro application of a super-lubricity switch may be quite a way off, MEMS applications in devices such as cellphones and Fitbits are possible in a shorter timescale.

"Because they are such small devices, the actuation force is so small, so any friction can kill the device and then so, to prevent such failure problems, many MEMS devices have the chlorinated carbon coatings, but these are organic coatings,” Kim said. “And then those organic coatings cannot sustain for a long time over the repeated cycles because they wear off. But if we can put in graphene as a coating and then we can control the friction on and off, then we can have very precise motion control. And engineers can then revisit those old previous devices and technologies that were developed but could not be used because of the friction problems. This could lead to better or even new devices.”

“We would not be able to make this kind of discovery if we just look at our publications and didn’t do the basic work,” Kim said. “Some may think that breakthroughs come naturally, but there is a lot of effort that goes into it. We cannot forget about doing the fundamental science that leads to these research collaborations and discoveries.”