Considering Nano for a Living?
Looking for the Best Nanotechnology Universities of the World?
We Have You Covered!

Spending too many hours thinking about which major, which minor, which research project, which college, and most importantly which career to choose is an indispensable part of our lives, but above all, gathering as much information as we can about our possible options undoubtedly makes a profound difference in shaping our future. Keep reading this article if there are times that you too find yourself drown in the nano world, and if the future you choose is the one with nanotechnology breakthroughs in it! Get to know the top nanotechnology universities of the world here, together with their pioneering research into the field.

Nanotechnology has recently grown by leaps and bounds to the extent that it has been game-changing in a broad range of industries from automotive to healthcare and everything in between. Since almost every aspect of industrial development has somehow its roots in academia, a vast majority of universities and colleges worldwide have begun to run specialized programs in nanoscience and nanotechnology, and  since then they have been attempting to equip their labs with cutting-edge research facilities and equipment for training a new generation of skilled nanoscientists, nanotechnologists, and experts to prepare them for nano-related careers, and to lead the rapidly-growing field of nanotechnology.

Generally, students with nanotechnology backgrounds have the opportunity to make enormous contributions to this field in such a way that it can enhance multiple industries at the same time; they have thus a wide variety of career options in many industrial sectors from avionics and automotive electronics to data storage and data transmission to pharmaceuticals, to textile, and many other industries.

Likewise, nanotechnology, which obviously is of an interdisciplinary nature, has emerged at the intersection of chemistry, physics, materials science, mathematics, molecular biology, and engineering; hence, the nano-related programs offered by many universities have been designed to provide students with a thorough understanding of the required subjects in these fields.

At undergraduate level, nanotechnology courses are typically run as a compulsory or elective subject covering the fundamentals of nanotechnology and nanoscience.  In master’s program, courses have been arranged to equip students with the necessary skills regarding the characterization, design, development, and application of nanomaterials; and finally, a Ph.D. degree in nanotechnology mainly focuses on broadening students’ research skills in highly specialized nano-related subjects, and their understanding of project management from a scientific viewpoint.

In almost every technical university around the world, nanotechnology is offered either as an independent program or as a specialization of other majors such as materials science, physics, chemistry, biology, etc., but regardless of the selected approach at a given university, its Shanghai Global Ranking can be an appropriate criterion for acquiring a general idea of the university’s position on the world scale.

The following table ranks the universities and research centers of North America, Europe, Asia, Oceania, South America, and Africa in order of their Shanghai Global Ranking in Nanoscience & Nanotechnology 2018, and also presents their number of ISI-indexed nano-articles published in 2017.

As shown, Nanyang Technological University from Asia has made it to the top with 1169 nano-articles. In this university nanotechnology and nanoscience are considered as the specializations of Chemical & Biomedical Engineering, Materials Science & Engineering, and Electrical and Electronic Engineering, in which many strong teams are conducting research on various subjects such as fuel cell technology, applied catalysis and reaction engineering, functionalized polymeric materials, and nanocomposite materials for biosensors and pharmaceutical applications.

However, the leading European university in nanotechnology, the University of Cambridge with the Shanghai Ranking of 17th, offers a Master of Philosophy (M.Phil.) program in Micro & Nanotechnology Enterprise, and Master of Research (M.Res.) and Ph.D. programs in Nanoscience & Nanotechnology as independent interdisciplinary programs jointly run by the departments of Chemistry, Physics, Engineering, and Materials Science and Metallurgy. The nanotechnology researchers of this university are working on a wide range of subjects, including nanoscale devices, nanophotonics, nanoscale polymers and colloids, optoelectronics, sensors, protein engineering, gallium nitride materials, high-temperature aerospace materials, and so on.

Given the number of the ISI-indexed nano-articles illustrated in the table, Asian universities have conspicuously more publications compared to those of other continents. The Shanghai Rankings of these Asian universities, nonetheless, are not directly proportional to the number of their nano-articles, due mainly to the fact that other parameters such as category normalized citation impact, international collaboration, awards, and the number of publications in the top journals of nanotechnology and nanoscience have also been considered in the methodology of Shanghai Ranking system.

Table 1. Leading universities and research centers of different continents in nanoscience and nanotechnology in order of their Shanghai Global Ranking in Nanoscience & Nanotechnology 2018

The pie charts below indicate the continental distribution of the top 100 universities based on their Shanghai Global Ranking in Nanoscience & Nanotechnology 2018, as well as the top 100 experts of this field according to their Google Scholar public profiles by November 2017; it can be seen that although North America and Europe respectively hold 33% and 15% of the top universities, they interestingly own 49% and 26% of the leading experts. On the contrary, Asia having 48% of these pioneering universities has just 22% of the top 100 nanotechnology experts.

Figure 1. The distribution of the top 100 universities ranked in order of their Shanghai Global Ranking in Nanoscience & Nanotechnology 2018. 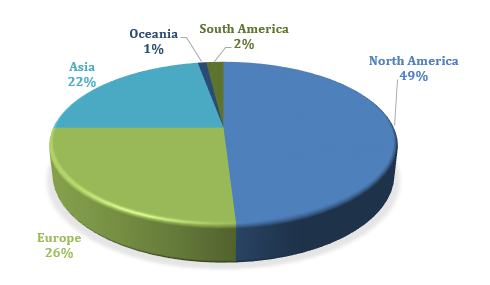 Figure 2. The distribution of the top 100 nanotechnology and nanoscience experts considering their Google Scholar public profiles until November 2017.

To wrap it up, many graduate students having bachelor’s degrees in different branches of science have the opportunity of pursuing their studies in the field of nanoscience and nanotechnology in almost every country of the world. Although the students can find a large number of universities with research groups working in this area, there are also a number of universities that grant diplomas specifically in this field. Some of these universities together with their special programs are demonstrated in the following table.

Table 2. The universities and institutions offering independent programs in the field of nanoscience and nanotechnology