TU/e researchers prove selectivity based on number of receptors on the cell walls In order to deliver drug particles to the right place in the body, a field known as nanomedicine, selectivity plays an important role. After all, the drug only has to attach itself to the cells that need it. A theory from 2011 predicts that selectivity is not only based on the type of receptors, but also on the number and strength of the receptors on the cell. Researchers at Eindhoven University of Technology are now proving this experimentally. They published their results in the journal PNAS.

Cells in our bodies interact with each other through receptors and ligands. They fit on each other like a key in a lock; a ligand of one cell only fits on 'its' target receptor of the other cell. The field of nanomedicine makes use of this by imitating ligands that fit the receptors of the diseased cell that needs the drug.

In 2011 Daan Frenkel and his group in Cambridge used a theoretical model to predict that not only the type of ligands and receptors play a major role, but also the number and strength. This means that even weak ligands can bind, as long as there are enough receptors present on the surface of the target cell. Researchers Max Scheepers, Leo van IJzendoorn, and Menno Prins, all part of the Institute for Complex Molecular Systems, have now proven this theory experimentally with particles for the first time. 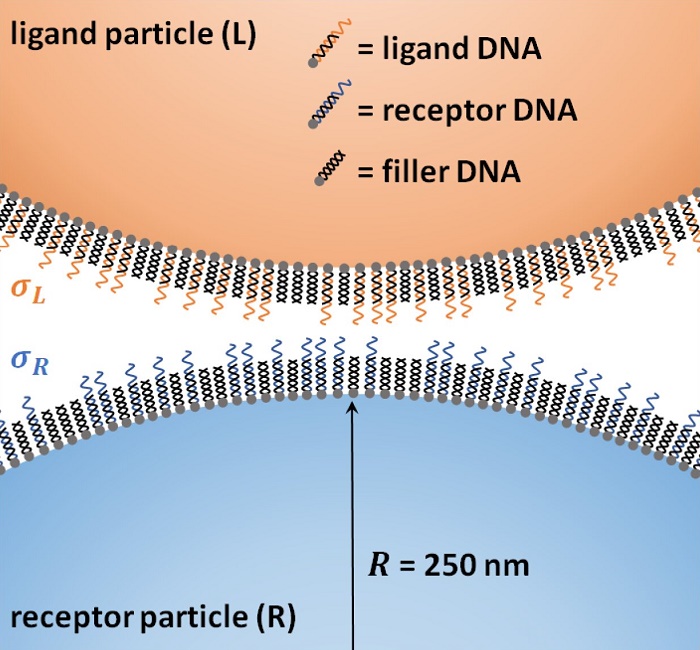 TU/e researchers prove selectivity based on number of receptors on the cell walls.

Van IJzendoorn: "Compare it to Velcro; if one hook is fastened, the strip does not stick immediately. Only when several hooks are fastened, the bond will be strong enough. This is also how it works in the human body; the weak binding of a ligand on a receptor becomes enormously strong the more there are.”

And that's a useful feature for nanomedicine. Diseased cells do not always have different receptors than healthy cells, but they often have more receptors on their cell walls. By developing the drug in such a way that it only sticks to cells with a lot of receptors, you can still distinguish between diseased and healthy cells. And so, you can send the drug particles more precisely to the diseased cells in the body.

"We have now experimentally demonstrated with particles that many weak ligands give a high selectivity: the particles only bind if there are exactly enough receptors present. This creates a threshold value," explains van IJzendoorn. The researchers carried out a binding experiment for this purpose, designing particles with either receptor DNA or ligand DNA on its surface.

A magnetic field first pulled the particles towards each other and after some time released them. Van IJzendoorn: "This allowed us to optically measure how many particles had developed a strong molecular binding with each other." By varying the number of DNA molecules and the strength of the ligand-receptor binding, not only were the researchers able to see how many bindings were needed for the particles to stay bonded but also to observe the emergence of the threshold value.

Van IJzendoorn: "These results form a new benchmark for understanding and applying selectivity in biomedical applications. The work provides a fundamental basis for the design of binding processes in nanomedicine. In addition, it is important for the development of nanotechnological biosensors, because particles are also used in these systems for the establishment of selective bonds.”

This research was published in the journal PNAS, titled "Multivalent weak interactions enhance selectivity of inter-particle binding." The research was carried out at Eindhoven University of Technology, at the departments of Applied Physics and Biomedical Engineering and the Institute for Complex Molecular Systems.