Who Stole the Light?

Free electron X-ray lasers deliver intense ultrashort pulses of x-rays, which can be used to image nanometer-scale objects in a single shot. When the x-ray wavelength is tuned to an electronic resonance, magnetization patterns can be made visible. When using increasingly intense pulses, however, the magnetization image fades away. The mechanism responsible for this loss in resonant magnetic scattering intensity has now been clarified.

Just as in flashlight photography, short yet intense flashes of x-rays allow to record images or x-ray diffraction patterns which “freeze” motion that is slower than the duration of the x-ray pulse. The advantage of x-rays over visible light is that nanometer scale objects can be discerned due to the short wavelength of x-rays.

Furthermore, if the wavelength of the x-rays is tuned corresponding to particular energies for electronic transitions, one can obtain unique contrast, allowing for example to make the magnetization of different domains within a material visible.

The fraction of x-rays scattered from a magnetic domain pattern, however, decreases when the x-ray intensity in the pulse is increased. While this effect had been observed already in the very first images of magnetic domains recorded at a free electron x-ray laser in 2012, a variety of different explanations had been put forward to explain this loss in scattered x-ray intensity.

A team of researchers from MBI Berlin, together with colleagues from Italy and France, has now precisely recorded the dependence of the resonant magnetic scattering intensity as a function of the x-ray intensity incident per unit area ( the “fluence”) on a ferromagnetic domain sample.

Via integration of a device to detect the intensity of every single shot hitting the actual sample area, they were able record the scattering intensity over three orders of magnitude in fluence with unprecedented precision, in spite of the intrinsic shot-to-shot variations of the x-ray beam hitting the tiny samples. The experiments with soft x-rays were carried out at the FERMI free-electron x-ray laser in Trieste, Italy.

Magnetization is a property directly coupled to the electrons of a material, which make up the magnetic moment via their spin and orbital motion. For their experiments, the researchers used patterns of ferromagnetic domains forming in cobalt-containing multilayers, a prototypical material often used in magnetic scattering experiments at x-ray lasers. In the interaction with x-rays, the population of electrons is disturbed and energy levels can be altered.

Both effects could lead to a reduction in scattering, either through a transient reduction of the actual magnetization in the material due to the reshuffling of electrons with different spin, or by not being able to detect the magnetization anymore because of the shift in the energy levels.

Furthermore, it has been debated whether the onset of stimulated emission at high x-ray fluences administered during a pulse of about 100 femtoseconds duration can be responsible for the loss in scattering intensity.

The mechanism in the latter case is due to the fact that in stimulated emission, the direction of an emitted photon is copied from the incident photon. As a result, the emitted x-ray photon would not contribute to the beam scattered away from the original direction, as sketched in Fig.1. 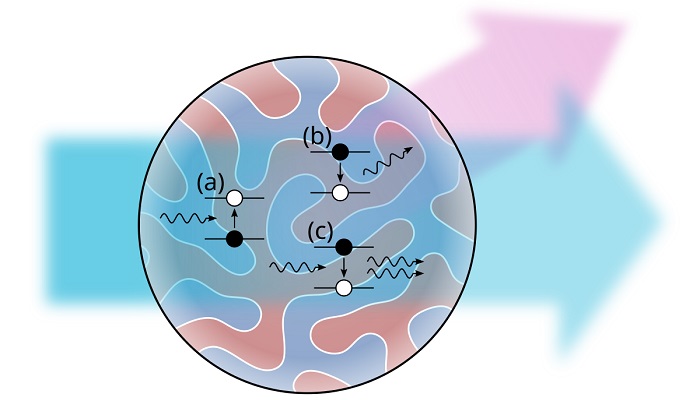 Fig. 1: Schematic sketch of the scattering experiment with two competing processes. The soft x-ray beam (blue arrow, from left) hits the magnetic sample (circular area) where it scatters from the microscopic, labyrinth-like magnetization pattern. In this process, an x-ray photon is first absorbed by a Cobalt 3p core electron (a). The resulting excited state can then relax spontaneously (b), emitting a photon in a new direction (purple arrow). This scattered light is recorded as the signal of interest in experiments. However, if another x-ray photon encounters an already excited state, stimulated emission occurs (c). Here, two identical photons are emitted in the direction of the incident beam (blue arrow towards right). This light carries only little information on the sample magnetization and is usually blocked for practical reasons.

The experimental data over the entire fluence range is well described by simply considering the actual demagnetization occurring within each magnetic domain, which the MBI researchers had previously characterized with laser-based experiments.

Given the short lifetime of the Co 3p core levels of about a quarter femtosecond which is dominated by Auger decay, it is likely that the hot electrons generated by the Auger cascade in concert with subsequent electron scattering events lead to a reshuffling of spin up and spin down electrons transiently quenching the magnetization.

This is in line with the observation that less reduction of the magnetic scattering is observed when hitting the magnetic sample with the same number of x-ray photons within a shorter pulse duration (Fig.2). In contrast, if stimulated emission were the dominant mechanism, the opposite behavior would be expected. 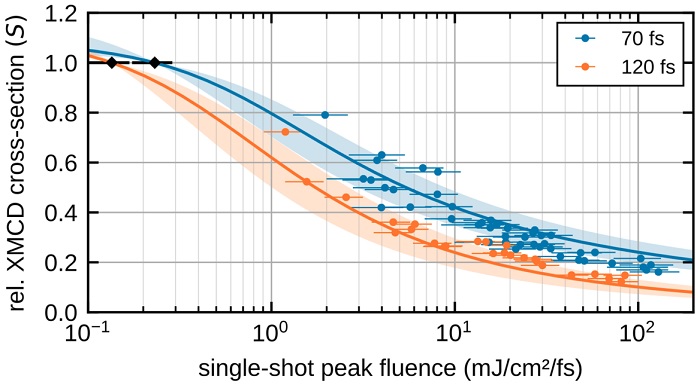 Fig. 2: Fluence dependence of the magnetic scattering signal for two different soft x-ray pulse durations. In the case of stimulated emission, which is responsible for a similar fluence-dependence at the Co 2p-to-valence transition, both curves are expected to coincide in this representation. Instead, the longer 120 fs pulses lead to significantly lower scattering. This is explained well by a model taking only ultrafast demagnetization induced by the soft x-ray beam itself into account (solid lines, shaded areas represent uncertainty of the model).

Beyond clarifying the mechanism at work, the findings have important ramifications for future single shot experiments on magnetic materials at free electron x-ray lasers. Similar to the situation in structural biology, where imaging of protein molecules by intense x-ray laser pulses can be impeded by the destruction of the molecule during the pulse, researchers investigating magnetic nanostructures also have to choose the fluence and pulse duration wisely in their experiments. With the fluence dependence of resonant magnetic scattering mapped out, researchers at x-ray lasers now have a guideline to design their future experiments accordingly.