Scientists are using the connectivity between artificial neurons to identify mutations of a new viral species.

In the September issue of the journal Nature, scientists from Texas A&M University, Hewlett Packard Labs and Stanford University have described a new nanodevice that acts almost identically to a brain cell. They have shown that these synthetic brain cells can be joined together to form intricate networks that can then solve problems in a brain-like manner.

“This is the first study where we have been able to emulate a neuron with just a single nanoscale device, which would otherwise need hundreds of transistors,” said R. Stanley Williams, senior author on the study and professor in the Department of Electrical and Computer Engineering. “We have also been able to successfully use networks of our artificial neurons to solve toy versions of a real-world problem that is computationally intense even for the most sophisticated digital technologies.”

In particular, the researchers have demonstrated proof of concept that their brain-inspired system can identify possible mutations in a virus, which is highly relevant for ensuring the efficacy of vaccines and medications for strains exhibiting genetic diversity.

Over the past decades, digital technologies have become smaller and faster largely because of the advancements in transistor technology. However, these critical circuit components are fast approaching their limit of how small they can be built, initiating a global effort to find a new type of technology that can supplement, if not replace, transistors. 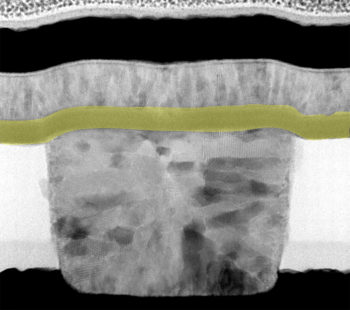 An electron micrograph of the artificial neuron. The niobium dioxide layer (in yellow) endows the device with neuron-like behavior.

In addition to this “scaling-down” problem, transistor-based digital technologies have other well-known challenges. For example, they struggle at finding optimal solutions when presented with large sets of data.

“Let’s take a familiar example of finding the shortest route from your office to your home. If you have to make a single stop, it’s a fairly easy problem to solve. But if for some reason you need to make 15 stops in between, you have 43 billion routes to choose from,” said Suhas Kumar, lead author on the study and researcher at Hewlett Packard Labs. “This is now an optimization problem, and current computers are rather inept at solving it.”

Kumar added that another arduous task for digital machines is pattern recognition, such as identifying a face as the same regardless of viewpoint or recognizing a familiar voice buried within a din of sounds.

But tasks that can send digital machines into a computational tizzy are ones at which the brain excels. In fact, brains are not just quick at recognition and optimization problems, but they also consume far less energy than digital systems. By mimicking how the brain solves these types of tasks, Williams said brain-inspired or neuromorphic systems could potentially overcome some of the computational hurdles faced by current digital technologies.

To build the fundamental building block of the brain or a neuron, the researchers assembled a synthetic nanoscale device consisting of layers of different inorganic materials, each with a unique function. However, they said the real magic happens in the thin layer made of the compound niobium dioxide.

These back-and-forth transitions enable the synthetic devices to generate a pulse of electrical current that closely resembles the profile of electrical spikes, or action potentials, produced by biological neurons. Further, by changing the voltage across their synthetic neurons, the researchers reproduced a rich range of neuronal behaviors observed in the brain, such as sustained, burst and chaotic firing of electrical spikes.

“Capturing the dynamical behavior of neurons is a key goal for brain-inspired computers,” Kumar said. “Altogether, we were able to recreate around 15 types of neuronal firing profiles, all using a single electrical component and at much lower energies compared to transistor-based circuits.”

To evaluate if their synthetic neurons can solve real-world problems, the researchers first wired 24 such nanoscale devices together in a network inspired by the connections between the brain’s cortex and thalamus, a well-known neural pathway involved in pattern recognition. Next, they used this system to solve a toy version of the viral quasispecies reconstruction problem, where mutant variations of a virus are identified without a reference genome.

By means of data inputs, the researchers introduced the network to short gene fragments. Then, by programming the strength of connections between the artificial neurons within the network, they established basic rules about joining these genetic fragments. The jigsaw puzzle-like task for the network was to list mutations in the virus’ genome based on these short genetic segments. 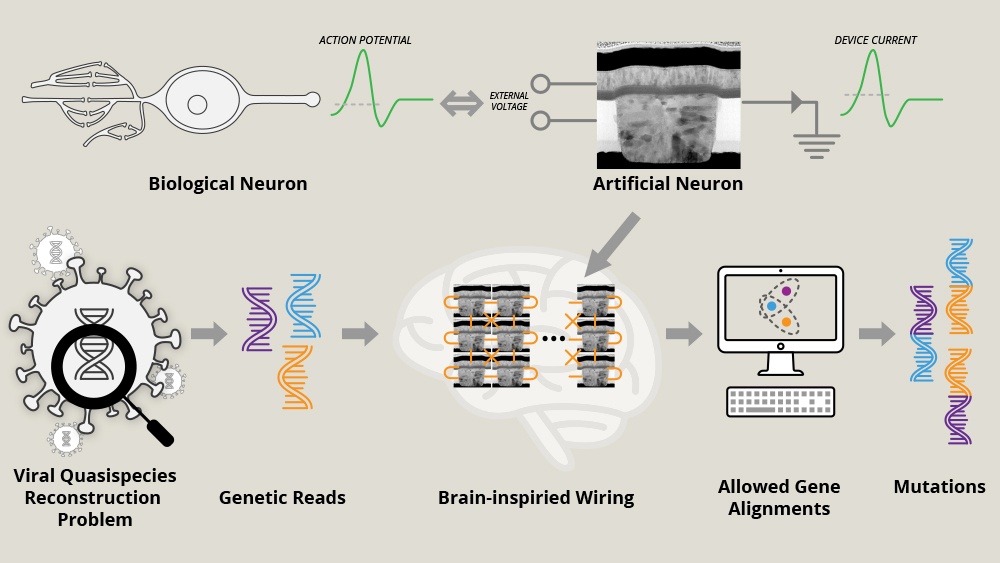 Networks of artificial neurons connected together can solve toy versions of the the viral quasispecies reconstruction problem.

The researchers found that within a few microseconds, their network of artificial neurons settled down in a state that was indicative of the genome for a mutant strain.

Williams and Kumar noted this result is proof of principle that their neuromorphic systems can quickly perform tasks in an energy-efficient way.

The researchers said the next steps in their research will be to expand the repertoire of the problems that their brain-like networks can solve by incorporating other firing patterns and some hallmark properties of the human brain like learning and memory. They also plan to address hardware challenges for implementing their technology on a commercial scale.

“Calculating the national debt or solving some large-scale simulation is not the type of task the human brain is good at and that’s why we have digital computers. Alternatively, we can leverage our knowledge of neuronal connections for solving problems that the brain is exceptionally good at,” said Williams. “We have demonstrated that depending on the type of problem, there are different and more efficient ways of doing computations other than the conventional methods using digital computers with transistors.”