Nanoparticles Can Turn off Genes in Bone Marrow Cells

Using specialized nanoparticles, MIT engineers have developed a way to turn off specific genes in cells of the bone marrow, which play an important role in producing blood cells. These particles could be tailored to help treat heart disease or to boost the yield of stem cells in patients who need stem cell transplants, the researchers say.

This type of genetic therapy, known as RNA interference, is usually difficult to target to organs other than the liver, where nanoparticles would tend to accumulate. The MIT researchers were able to modify their particles in such a way that they would accumulate in the cells found in the bone marrow.

“If we can get these particles to hit other organs of interest, there could be a broader range of disease applications to explore, and one that we were really interested in this paper was the bone marrow. The bone marrow is a site for hematopoiesis of blood cells, and these give rise to a whole lineage of cells that contribute to various types of diseases,” says Michael Mitchell, a former MIT postdoc and one of the lead authors of the study.

In a study of mice, the researchers showed that they could use this approach to improve recovery after a heart attack by inhibiting the release of bone marrow blood cells that promote inflammation and contribute to heart disease.

Marvin Krohn-Grimberghe, a cardiologist at the Freiburg University Heart Center in Germany, and Maximilian Schloss, a research fellow at Massachusetts General Hospital, are also lead authors of the paper, which appears today in Nature Biomedical Engineering. The paper’s senior authors are Daniel Anderson, a professor of chemical engineering at MIT and a member of MIT’s Koch Institute for Integrative Cancer Research and Institute for Medical Engineering and Science, and Matthias Nahrendorf, a professor of radiology at MGH. 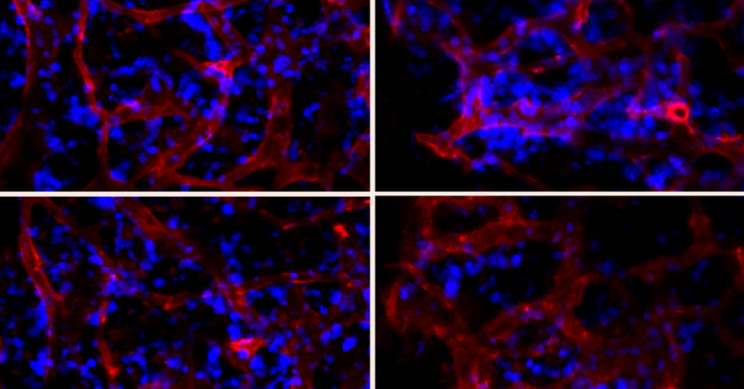 RNA interference is a strategy that could potentially be used to treat a variety of diseases by delivering short strands of RNA that block specific genes from being turned on in a cell. So far, the biggest obstacle to this kind of therapy has been the difficulty in delivering it to the right part of the body. When injected into the bloodstream, nanoparticles carrying RNA tend to accumulate in the liver, which some biotech companies have taken advantage of to develop new experimental treatments for liver disease.

Anderson’s lab, working with MIT Institute Professor Robert Langer, who is also an author of the new study, has previously developed a type of polymer nanoparticles that can deliver RNA to organs other than the liver. The particles are coated with lipids that help stabilize them, and they can target organs such as the lungs, heart, and spleen, depending on the particles’ composition and molecular weight.

“RNA nanoparticles are currently FDA-approved as a liver-targeted therapy but hold promise for many diseases, ranging from Covid-19 vaccines to drugs that can permanently repair disease genes,” Anderson says. “We believe that engineering nanoparticles to deliver RNA to different types of cells and organs in the body is key to reaching the broadest potential of genetic therapy.”

In the new study, the researchers set out to adapt the particles so that they could reach the bone marrow. The bone marrow contains stem cells that produce many different types of blood cells, through a process called hematopoiesis. Stimulating this process could enhance the yield of hematopoietic stem cells for stem cell transplantation, while repressing it could have beneficial effects on patients with heart disease or other diseases.

“If we could develop technologies that could control cellular activity in bone marrow and the hematopoietic stem cell niche, it could be transformative for disease applications,” says Mitchell, who is now an assistant professor of bioengineering at the University of Pennsylvania.

The researchers began with the particles they had previously used to target the lungs and created variants that had different arrangements of a surface coating called polyethylene glycol (PEG). They tested 15 of these particles and found one that was able to avoid being caught in the liver or the lungs, and that could effectively accumulate in endothelial cells of the bone marrow. They also showed that RNA carried by this particle could reduce the expression of a target gene by up to 80 percent.

The researchers tested this approach with two genes that they believed could be beneficial to knock down. The first, SDF1, is a molecule that normally prevents hematopoietic stem cells from leaving the bone marrow. Turning off this gene could achieve the same effect as the drugs that doctors often use to induce hematopoietic stem cell release in patients who need to undergo radiation treatments for blood cancers. These stem cells are later transplanted to repopulate the patient’s blood cells.

“If you have a way to knock down SDF1, you can cause the release of these hematopoietic stem cells, which could be very important for a transplantation so you can harvest more from the patient,” Mitchell says.

The researchers showed that when they used their nanoparticles to knock down SDF1, they could boost the release of hematopoietic stem cells fivefold, which is comparable to the levels achieved by the drugs that are now used to enhance stem cell release. They also showed that these cells could successfully differentiate into new blood cells when transplanted into another mouse.

“We are very excited about the latest results,” says Langer, who is also the David H. Koch Institute Professor at MIT. “Previously we have developed high-throughput synthesis and screening approaches to target the liver and blood vessel cells, and now in this study, the bone marrow. We hope this will lead to new treatments for diseases of the bone marrow like multiple myeloma and other illnesses.”

The second gene that the researchers targeted for knockdown is called MCP1, a molecule that plays a key role in heart disease. When MCP1 is released by bone marrow cells after a heart attack, it stimulates a flood of immune cells to leave the bone marrow and travel to the heart, where they promote inflammation and can lead to further heart damage.

In a study of mice, the researchers found that delivering RNA that targets MCP1 reduced the number of immune cells that went to the heart after a heart attack. Mice that received this treatment also showed improved healing of heart tissue following a heart attack.

“We now know that immune cells play such a key role in the progression of heart attack and heart failure,” Mitchell says. “If we could develop therapeutic strategies to stop immune cells that originate from bone marrow from getting into the heart, it could be a new means of treating heart attack. This is one of the first demonstrations of a nucleic-acid-based approach of doing this.”

At his lab at the University of Pennsylvania, Mitchell is now working on new nanotechnologies that target bone marrow and immune cells for treating other diseases, especially blood cancers such as multiple myeloma.