Researchers at ETH have demonstrated a new technique for carrying out sensitive quantum operations on atoms. In this technique, the control laser light is delivered directly inside a chip. This should make it possible to build large-​scale quantum computers based on trapped atoms.

Hitting a specific point on a screen with a laser pointer during a presentation isn’t easy – even the tiniest nervous shaking of the hand becomes one big scrawl at a distance. Now imagine having to do that with several laser pointers at once. That is exactly the problem faced by physicists who try to build quantum computers using individual trapped atoms. They, too, need to aim laser beams – hundreds or even thousands of them in the same apparatus - precisely over several metres such as to hit regions only a few micrometres in size that contain the atoms. Any unwanted vibration will severely disturb the operation of the quantum computer. 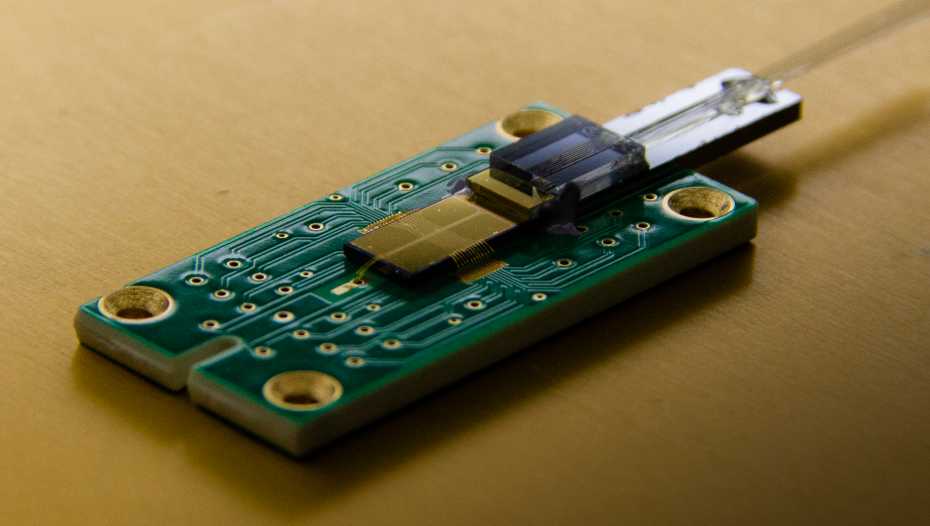 The ion-​trap chip with integrated waveguides. The laser light is fed into the chip via the optical fibres on the right.

At ETH in Zurich, Jonathan Home and his co-​workers at the Institute for Quantum Electronics have now demonstrated a new method that allows them to deliver multiple laser beams precisely to the right locations from within a chip in such a stable manner that even the most delicate quantum operations on the atoms can be carried out.

Aiming for the quantum computer

To build quantum computers has been an ambitious goal of physicists for more than thirty years. Electrically charged atoms – ions – trapped in electric fields have turned out to be ideal candidates for the quantum bits or qubits, which quantum computers use for their calculations. So far, mini computers containing around a dozen qubits could be realized in this way. “However, if you want to build quantum computers with several thousand qubits, which will probably be necessary for practically relevant applications, current implementations present some major hurdles,” says Karan Mehta, a postdoc in Home’s laboratory and first author of the study recently published in the scientific journal “Nature”. Essentially, the problem is how to send laser beams over several metres from the laser into a vacuum apparatus and eventually hit the bull’s eye inside a cryostat, in which the ion traps are cooled down to just a few degrees above absolute zero in order to minimize thermal disturbances.

Optical setup as an obstacle

“Already in current small-​scale systems, conventional optics are a significant source of noise and errors – and that gets much harder to manage when trying to scale up”, Mehta explains. The more qubits one adds, the more complex the optics for the laser beams becomes which is needed for controlling the qubits. “This is where our approach comes in”, adds Chi Zhang, a PhD student in Home’s group: “By integrating tiny waveguides into the chips that contain the electrodes for trapping the ions, we can send the light directly to those ions. In this way, vibrations of the cryostat or other parts of the apparatus produce far less disturbance.”

The researchers commissioned a commercial foundry to produce chips which contain both gold electrodes for the ion traps and, in a deeper layer, waveguides for laser light. At one end of the chips, optical fibres feed the light into the waveguides, which are only 100 nanometres thick, effectively forming optical wiring within the chips. Each of those waveguides leads to a specific point on the chip, where the light is eventually deflected towards the trapped ions on the surface. 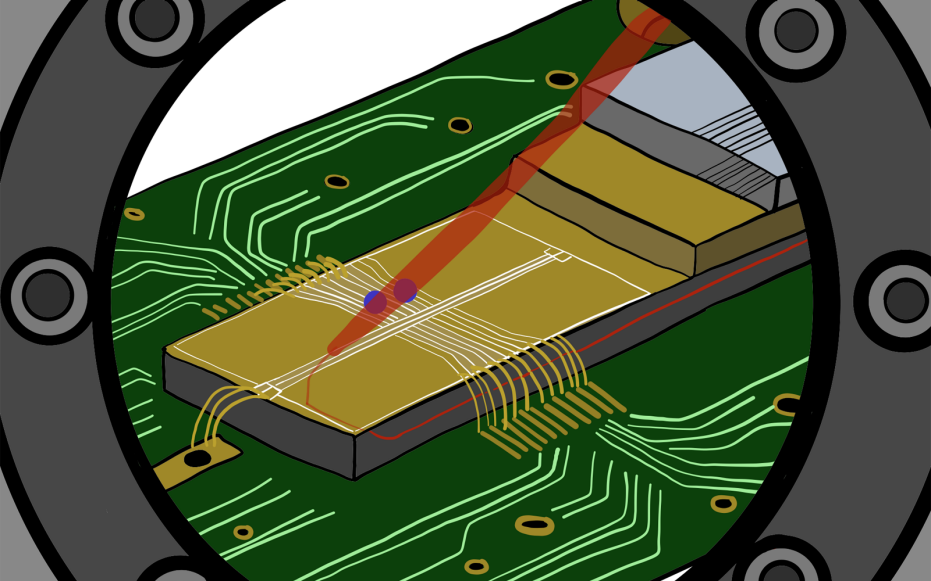 An ion trap with integrated waveguides. The laser light (red) for controlling the two trapped ions (blue) is delivered to the ion traps inside the chip.

Work from a few years ago (by some of the authors of the present study, together with researchers at MIT and MIT Lincoln Laboratory) had demonstrated that this approach works in principle. Now the ETH group has developed and refined the technique to the point where it is also possible to use it for implementing low-​error quantum logic gates between different atoms, an important prerequisite for building quantum computers.

In a conventional computer chip, logic gates are used to carry out logic operations such as AND or NOR. To build a quantum computer, one has make sure that it can to carry out such logic operations on the qubits. The problem with this is that logic gates acting on two or more qubits are particularly sensitive to disturbances. This is because they create fragile quantum mechanical states in which two ions are simultaneously in a superposition, also known as entangled states. 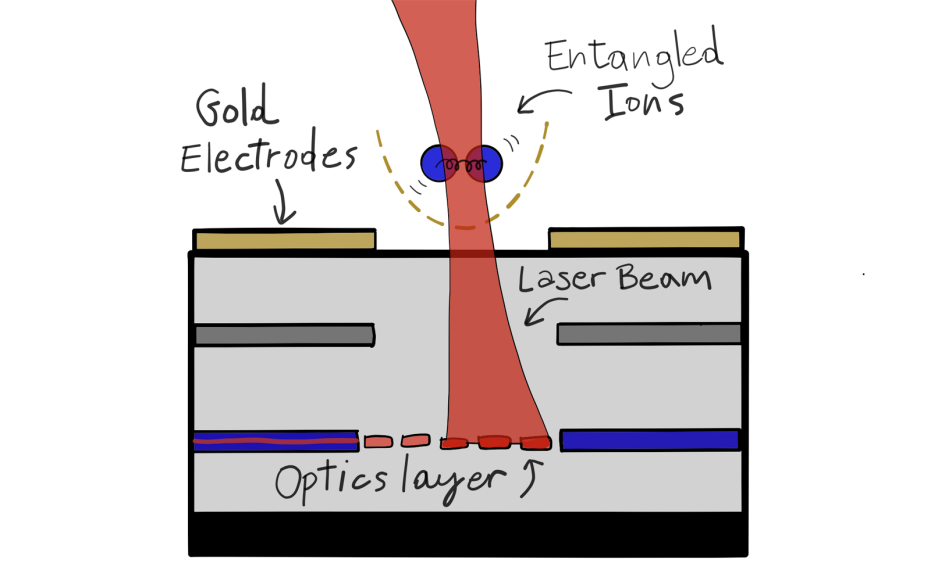 Cross section of the ETH researchers' new chip. The gold electrodes are used to trap the ions, while the laser light is guided directly to the ions in an optics layer.

In such a superposition, a measurement of one ion influences the result of a measurement on the other ion, without the two being in direct contact. How well the production of those superposition states works, and thus how good the logic gates are, is expressed by the so-​called fidelity. “With the new chip we were able to carry out two-​qubit logic gates and use them to produce entangled states with a fidelity that up to now could only be achieved in the very best conventional experiments”, says Maciej Malinowski, who was also involved in the experiment as a PhD student.

The researchers have thus shown that their approach is interesting for future ion trap quantum computers as it is not just extremely stable, but also scalable. They are currently working with different chips that are intended to control up to ten qubits at a time. Furthermore, they are pursuing new designs for fast and precise quantum operations that are made possible by the optical wiring.