Liquid Nanofoam Could Be a Game Changer for Future Football Helmets

A liquid nanofoam liner undergoing testing could prolong the safe use of football helmets, says a Michigan State University researcher.

When a helmet withstands an impact severe enough to cause a concussion to the player wearing it, the safety features of the helmet are compromised, rendering equipment unsafe for further use, said MSU’s Weiyi Lu, an MSU assistant professor of civil and environmental engineering.

Lu has been testing a liquid nanofoam material that could change that and the research was published on Oct. 13 in the Proceedings of the National Academy of Sciences.

The material is full of tiny nanopores. “The pore diameters are between two and 200 nanometers and that creates a large amount of surface area,” Lu said. “The whole area of MSU’s Spartan Stadium could be folded up into one gram of nanofoam.” 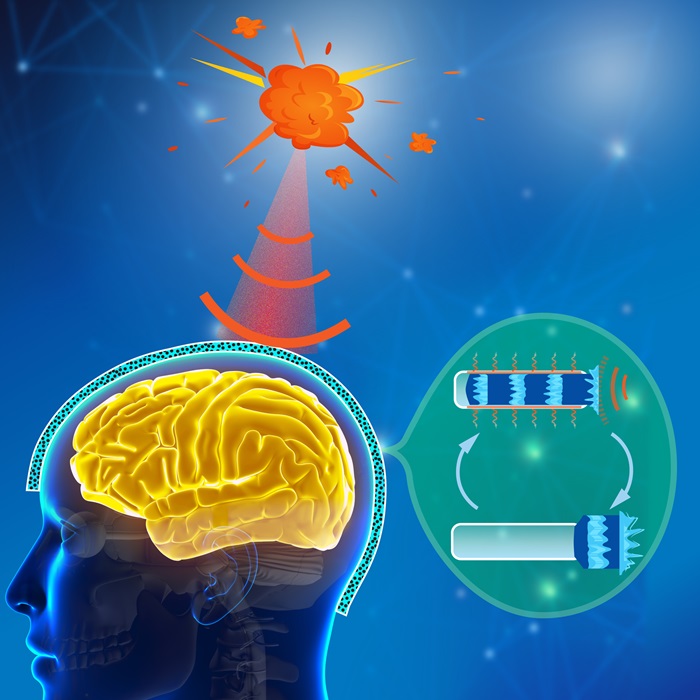 An electronic microscopic image of the nanofoam material. Each pore is 10 nm in diameter.

Ordinarily, the material is rigid and adding liquid would fill the holes. To fix this, Lu and his team coated the nanopores with a hydrophobic or water repellant silicone layer made from an organic silyl chain that prevents liquid from being absorbed by the material. As a result, the saltwater liquid inside the nanofoam material becomes pressurized during an impact.

“When the pressure reaches the safety threshold, ions and water are forced into the nanopores making the material deformable for effective protection. In addition, the liquid-like material is pliable enough to form into any shape,” he said. “Helmets are pretty much one shape but the liquid nanofoam material can be made to fit a person’s specific head shape or profile." 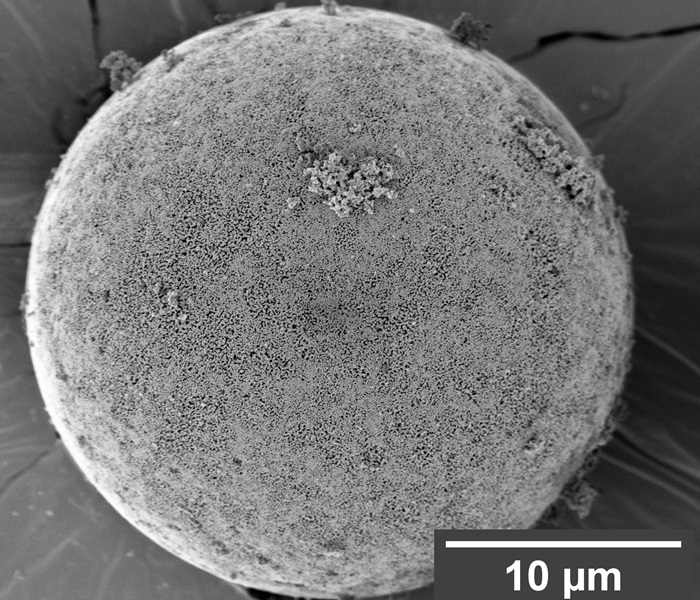 During an impact, pressurized water fills the nano pores.

In early laboratory tests, Lu and his team compared an eighth-inch liquid nanofoam liner against the three-quarter-inch piece of solid foam traditionally used in helmets. Both materials were struck with a five-kilogram mass (the approximate weight of a human head) at three meters per second. Even though both materials were deformed by the impact, the liquid nanofoam recovered between the continuous impacts of the test and the solid foam did not.

“The liquid nanofoam outperformed the solid foam,” Lu said. “The nanofoam was able to mitigate continuous multiple impacts without damage; the results were identical from test one through test 10.”

A liquid nanofoam liner would be thinner and less bulky inside a helmet. And since the liner can withstand multiple high-impact forces, the liner would not need to be replaced after a high-impact collision unless the helmet shell was damaged.“A helmet that can be safely reused is a huge advantage,” he said. “We would love to see a liquid nanofoam liner in MSU football helmets in the future.”

Lu envisions multiple future applications of the liquid nanofoam material beyond football and military helmets. The material could also be used in passive safety devices such as automobile air bags and bumpers. The liquid nanofoam could even be used to protect people and buildings from earthquake vibrations.

The next stage of research will focus on more dynamic studies that will test faster and more intensive impacts such as the effects of a bomb blast, Lu said. “We want this material to help not just extend people's lives but to improve their quality of life.”