To ensure that sepsis patients receive appropriate antibiotics as quickly as possible, Fraunhofer IGB researchers have developed a diagnostic procedure that uses high-throughput sequencing of blood samples and delivers results much faster than conventional culture-based techniques. Thanks to the latest single-molecule sequencing techniques, this process has now been further improved so that pathogens can be identified after just a few hours. The basic methodology is currently being tested in a multi-center study with several hundred patients.

Sepsis – also known as "blood poisoning" – is a life-threatening disease caused by the uncontrolled proliferation of pathogens – bacteria, viruses or parasites – in blood. In Germany alone, sepsis is responsible for about 60,000 deaths per year, and this trend is rising. Therapy is all the more successful the faster the diagnosis can be provided and the type of pathogen identified: fast intervention with adequate antibiotics significantly increases the survival rate.

It is still common practice in many hospitals to detect sepsis pathogens using microbiological methods. The pathogens are grown from patients' blood samples in the laboratory and afterwards identified. The limitations of this approach are a long turnaround time of two to five days as well as a low detection rate. In general, it only provides a positive result in 10 to 30 percent of cases, which represents the basis for the treating physician in making a decision on therapy. In addition, some pathogens cannot be cultivated at all or only under special conditions, so that the result is negative even though an infection is actually present – with fatal consequences for the patients. 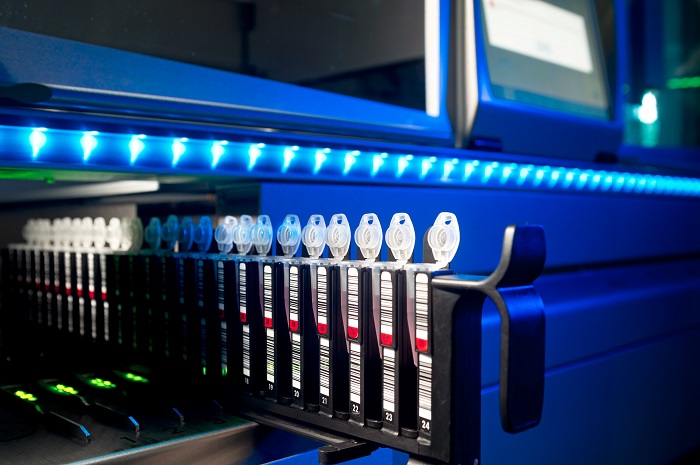 With automated DNA isolation, up to 44 clinical samples can be prepared simultaneously.

Researchers at the Fraunhofer Institute for Interfacial Engineering and Biotechnology IGB established an alternative diagnostic procedure some time ago that can detect pathogens of all kinds much faster and more reliably. It uses next-generation sequencing (NGS) of microbial circulating cell-free DNA (cfDNA) from patients' blood samples and has a detection rate five to six times better than that of culture-based techniques.

In a three-step process consisting of sample preparation, sequencing and bioinformatic evaluation with specially developed diagnostic algorithms, relevant bacteria, viruses or fungi can be clearly identified within 24 to 30 hours after blood collection without any lengthy cultivation procedure. As a platform-based approach, the method is not only suitable for the diagnosis of sepsis, but potentially also for other diseases such as endocarditis or CSF i.e. spinal fluid infections. In addition, not only the biological nature of the pathogen, but also its resistance to antibiotics can be determined, which might be considered for an optimal therapy.

All major German hospitals involved in the study

The clinical validation of the diagnostic platform for sepsis is currently running in a multi-center study: "Now we are testing our procedure on a large scale in the clinic," reports Dr. Kai Sohn, head of the innovation field “In-vitro Diagnostics” at Fraunhofer IGB, on the status of the research work. "This involves 500 patients in 20 clinics; practically all major German-based university clinics are involved. Remarkably, this study is well beyond schedule – and thus we gain a big lead.” The project is supported by the Dietmar Hopp Foundation.

Even faster and more cost-effective diagnosis

Sequencing technologies will further develop so that the results can be delivered even faster and more cost-effectively: using one of the latest 3rd generation sequencing technologies, the microbial DNA can be examined in real-time during sequencing, reducing pathogen identification to just six to eight hours, depending on how severely the patient is infected. This has been made possible by nanopore sequencing of individual DNA molecules. "With nanopore sequencing we get results every minute," explains Sohn. "We are now waiting for the proof of concept to find out the shortest possible turnaround time. But it seems feasible that we might be able to routinely detect pathogens in less than six hours after blood sampling in the future.”

The unambiguous identification of the pathogens is made possible by mathematical calculations based on the sequence information from the patient sample: for this purpose, the Fraunhofer researchers have developed a relevance score – the Sepsis Indicating Quantifier (SIQ) Score – which bioinformatically compares the data of the infected persons with healthy control groups and then evaluates them. "For this purpose, we generated expectation values for hundreds of different pathogens in advance," reports Sohn. "On this basis, we can now provide results in a similar form as everyone knows from their family doctor's blood count. Our algorithms thus support rapid and adequate therapy decisions. And this might also has the potential to be performed as a point-of-care test directly in the intensive care unit in the future.