An extensive internal void enables a secure encapsulation, delivery, and storage of guest molecules as large as 4 nanometers.

Famous Catalan architect Antoni Gaudí once said, “Anything created by human beings is already in the great book of nature.” Among different man-made architectures and art, spherical structures and shapes have been the most fantastical geometrical form that fascinated the figments of the human imagination. Making perfect spherical architectures is challenging due to their geometric purity and technical complexity and therefore these structures are both enchanting as well as rare.

On one hand, perhaps inspired by the huge celestial bodies, architects like Fuller have designed geodesic dome structures such as the Montreal Biosphère; on the other side, there are chemists who are the architects of the world’s most miniature aesthetic structures. The latter draw most of their inspiration from the complex self-assembled structures present in nature such as the highly symmetric hollow spherical virus capsids and protein cages. Making such purely organic, atomically precise hollow molecular spheres or cages is synthetically challenging.

Previous approaches for constructing pure organic cages usually allowed the formation of small-sized organic cages (cavity diameter &lt; 2 nm), thereby restricting their applications. So far, one of the rare successful examples reported in 2014 is the synthesis of a boronic ester based porous organic cage (~3 nm in diameter). A larger organic cage has not been reported thereafter till date due to the complex and tedious nature of the synthetic techniques required to construct such structures. 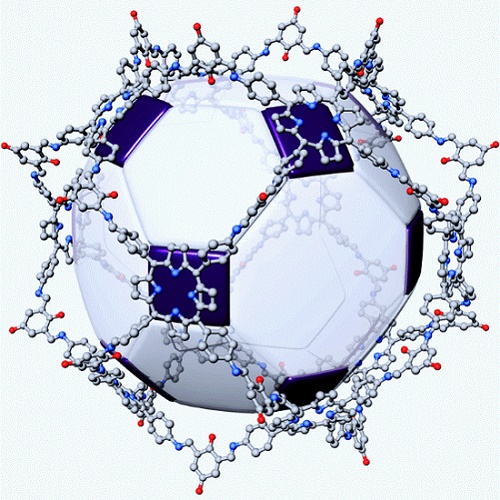 Now, a team led by Director KIM Kimoon at the Center for Self-assembly and Complexity within the Institute for Basic Science (IBS) in Pohang, South Korea successfully developed a template-free, one-pot synthesis of a porphyrin-based gigantic organic cages composed of multi-porphyrin units (see animation). In general, the progress of a chemical reaction or process is favored by an increase in randomness or entropy of the system.

However, during cage formation, when randomly scattered multiple cage subunits organize to form a single 3D structure, the process becomes entropically unfavorable. To coerce multiple molecules to assemble in a 3D spherical space and amalgamate them into a single spherical molecule through covalent bonds, researchers have previously synthesized and utilized other molecules specifically to act as templates to promote the preorganization process.

Circumventing these challenges, Kim and colleagues were however, been able to synthesize P12L24 cages built with 36 components, i.e. 12 square-shaped porphyrins (P) units and 24 bent linkers (L), without the use of a template based strategy. “We hypothesized that it would be possible to synthesize such large organic cages, if the shape, rigidity, length and bent angles of component molecules (porphyrin derivative and bent linker) were judiciously designed,” explains KOO Jaehyoung, the first author of this study.

The cage has an outer dimension of 5.3 nm and an inner cavity, 4.3 nm in diameter (Figure 1). The overall structure of the P12L24 cage is reminiscent of the structure of the transport protein cage COPII, which possess a cuboctahedral shape and consists of heterotetrameric units other coat components meeting at the tetrameric vertex similar to the porphyrin and linker subunits in P12L24 (Figure 2).

The researchers additionally explored the potential applicability of such large hollow molecular spheres or cages such as the encapsulation of host molecules and in photocatalysis. The present results will definitely facilitate the synthesis of multivariate large organic cages in the future, which may be suitable for transport of large cargoes, synthesis of uniform-sized nanoparticles, reactivity modulation of bound guests, molecular recognition, catalysis, and so on. “This is a major step forward in the synthesis of gigantic sphere-shaped molecules. If we can make the P12L24 cages water soluble, perhaps they can serve as an efficient container for large guest molecules such as proteins and assist their storage, delivery, and other applications.

Our study may offer a breakthrough in establishing a smart and easy way of constructing a superstructure composed of a large number of building blocks by defeating the entropy issue,” notes Director Kim. He further adds, “The other significance of these structures is exploiting the presence of the porphyrin subunits, which showcases interesting photophysical properties such as light-harvesting, energy transfer, electron transfer, etc.”