A new synthetic protein nanoparticle capable of slipping past the nearly impermeable blood-brain barrier in mice could deliver cancer-killing drugs directly to malignant brain tumors, new research from the University of Michigan shows.

The discovery could one day enable new clinical therapies for treating glioblastoma, the most common and aggressive form of brain cancer in adults, and one whose incidence is rising in many countries. Today’s median survival for patients with glioblastoma is around 18 months; the average 5-year survival rate is below 5%.

In combination with radiation, the U-M team’s intravenously injected therapy led to long-term survival in seven out of eight mice. When those seven mice experienced a recurrence of glioblastoma, their immune responses kicked in to prevent the cancer’s regrowth—without any additional therapeutic drugs or other clinical treatments.

“It’s still a bit of a miracle to us,” said Joerg Lahann, the Wolfgang Pauli Collegiate Professor of Chemical Engineering and a co-senior author of the study. “Where we would expect to see some levels of tumor growth, they just didn’t form when we rechallenged the mice. I’ve worked in this field for more than 10 years and have not seen anything like this.”

The findings suggest that the U-M team’s combination of therapeutic drugs and nanoparticle delivery methods not only eradicated the primary tumor, but resulted in immunological memory, or the ability to more quickly recognize—and attack—remaining malignant cancer cells.

“This is a huge step toward clinical implementation,” said Maria Castro, the R.C. Schneider Collegiate Professor of Neurosurgery and a co-senior author of the study. “This is the first study to demonstrate the ability to deliver therapeutic drugs systemically, or intravenously, that can also cross the blood-brain barrier to reach tumors.” 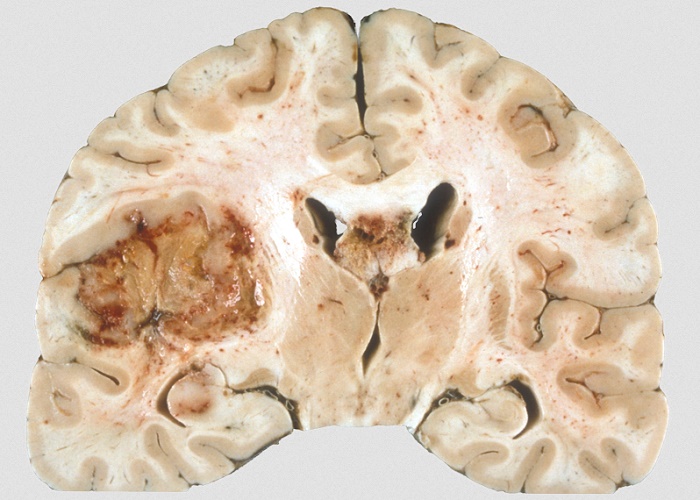 The study is the first to demonstrate an intravenous medication that can cross the blood-brain barrier.

Five years ago, Castro knew how she wanted to target glioblastoma. She wanted to stop a signal that cancer cells send out, known as STAT3, to trick immune cells into granting them safe passage within the brain. If she could shut down that pathway with an inhibitor, the cancer cells would be exposed and the immune system could eliminate them. But she didn’t have a way to get past the blood-brain barrier.

She attended a workshop at the Biointerfaces Institute, which Lahann leads, and the two discussed the problem. Lahann’s team began working on a nanoparticle that could ferry a STAT3 inhibitor past the blood-brain barrier.

A protein called human serum albumin, which is present in blood, is one of the few molecules that can cross the blood-brain barrier, so Lahann’s team used it as the structural building block for their nanoparticles. They used synthetic molecules to link these proteins up and then attached the STAT3 inhibitor and a peptide called iRGD, which serves as a tumor homing device.

Over the course of three weeks, a cohort of mice received multiple doses of the new nanomedicine, extending their median survival to 41 days, up from 28 days for those untreated. Following that success, the team performed a second mouse study using the drug alongside today’s current standard of care: focused radiotherapy. Seven of the eight mice reached long-term survival and appeared completely tumor-free, with no signs of malignant, invasive tumor cells.

The researchers say their synthetic protein nanoparticles could be adopted, after further development and preclinical testing, to deliver other small-molecule drugs and therapies to currently “undruggable” solid-based tumors.