A DNA-based Nanogel for Targeted Chemotherapy

Scientists have designed DNA-based nanogels that only break down and release their drug contents within cancer cells, reducing the effects on normal cells and thereby side effects.

Current chemotherapy regimens slow cancer progression and save lives, but these powerful drugs affect both healthy and cancerous cells. Now, researchers reporting in ACS’ Nano Letters have designed DNA-based nanogels that only break down and release their chemotherapeutic contents within cancer cells, minimizing the impacts on normal ones and potentially eliminating painful and uncomfortable side effects.

Once ingested or injected, chemotherapy medications move throughout the body, indiscriminately affecting healthy cells along with those that are responsible for disease. Since many of these drugs are toxic to all cells, the desired tumor shrinkage can be accompanied by undesirable side effects, such as hair loss, gastrointestinal issues and fatigue.

Nanogels made of DNA are one way that these drugs could be delivered, but they would still enter all cells. Tianhu Li, Teck-Peng Loh and colleagues reasoned that biomarkers — proteins or other components that are present in differing amounts in cancer cells and their healthy counterparts — could play a role in breaking down a nanogel, causing it to release its contents only in those that are cancerous.

A biomarker called FEN1, a repair enzyme that cuts certain types of DNA, is present in larger amounts in cancer cells compared with healthy ones. The researchers wanted to see whether they could design a DNA nanogel that would specifically be degraded in cancer cells by FEN1. 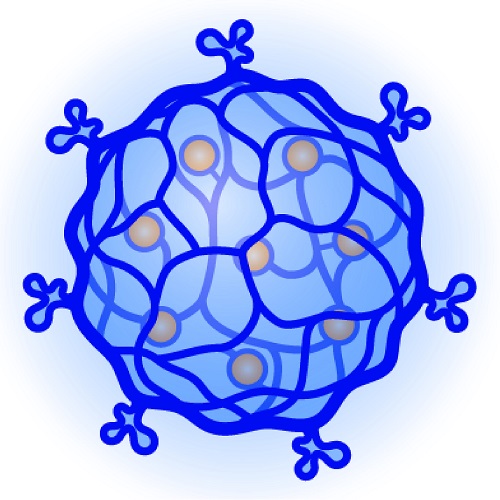 A DNA-based nanogel (shown above) is broken down in cancer cells to release chemotherapy drugs.

To make DNA nanogels, the researchers used special DNA structures that FEN1 could recognize and cut. With cell-free systems, the researchers observed that the DNA-based nanogels were broken down by FEN1 but not by other DNA repair enzymes or compounds. When live cells were incubated with the DNA-based nanogels, healthy ones did not have enough FEN1 to break them down, but cancer cells did. When the chemotherapeutic drugs doxorubicin and vinorelbine were incorporated into the nanogel, human breast cancer cells died at higher rates than normal, healthy breast cells.

These findings indicate DNA-based nanogels can introduce drugs into cancer cells with a high specificity, reducing the risk of side effects. The researchers say that the nanogels also could be used as probes for the biomarker enzyme, helping physicians more directly diagnose cancer compared with current methods.