Tiny Ultralight Insulators, At the Push of a Button

Using a 3D printer to make tiny translucent lotuses with millimeter-size petals: It’s eye-catching, but then again, printers are pretty good these days.

But to do it—the “it” being the process of building objects using a solid which becomes liquid after squeezing, flows through a needle, and reverts to a solid as it dries—with aerogel, a material that’s more than 99 percent air is something else.

Swiss researchers recently announced an additive manufacturing breakthrough with the material after three years of working on it. Potential applications include building tiny, thin superinsulators that save space on circuit boards and creating bespoke shapes that would help keep medical implants cool inside the body.

The researchers pulled back the curtain this August on a set of intricate demonstrator aerogel grids, cubes, and lotuses made using 3D microprinting techniques delivering structures as thin as one-tenth of a millimeter.

Aerogels are nanoporous solids; NASA sometimes calls them liquid or frozen smoke (the space agency’s made extensive use of aerogels including a mission that used them to capture interstellar comet dust). They can made from silica, graphene or any number of other base materials.

Silica aerogels are among the world’s best thermal insulators and a go-to object of Internet attention. Among the most dramatic illustrations of aerogels’ abilities are clips of flowers shielded from blowtorches or people protected from flamethrowers. Different base materials yield different aerogel properties: graphene or gold aerogels yield conductive paper, but make lousy insulators.

Silica is what’s called for to ward off heat. But aerogels are as finicky as they are fascinating. They’re difficult to handle and expensive to make in large quantities. Touch them too often and they crumble. They can be molded to more or less small sizes, but heretofore couldn’t be machined into tiny objects.

But teams of researchers—from Empa, the Swiss materials science and technology lab, along with colleagues at ETH Zürich, the federal tech research institute, and at the Paul Scherrer Institute in Aargau—were aware of the potential applications and wanted to see if they could shape aerogels at micro size. These teams have been working with aerogels in different capacities for the past decade, and developed an aerogel-based plaster for insulating restored historic or listed buildings.

“If you can miniaturize aerogel, the cost aspects become much different. With one cubic meter, you could make a million components for a cell phone or something—the materials cost doesn’t matter anymore,” says Wim Malfait, leader of Empa’s superinsulation materials group. “The issue is how to make them. How do you make the components in the shape, size and format that you need them?” 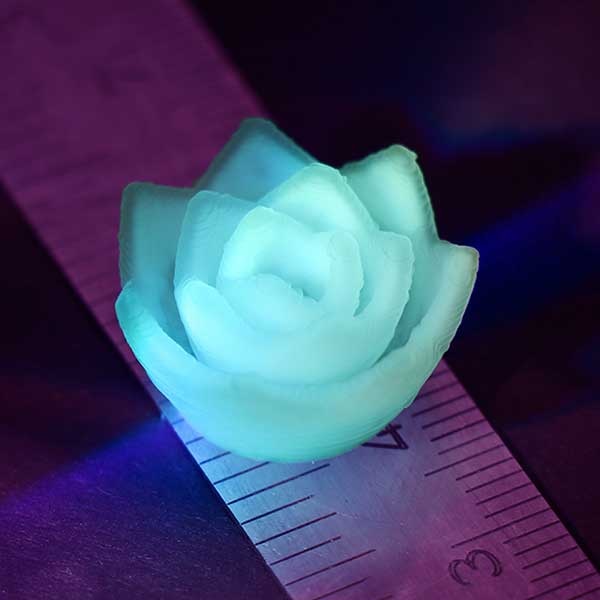 The flower measures about four milimeters across and the petals are about a millimeter thick.

The Empa team’s recipe for 3D printing takes off-the-shelf silica aerogel powder and adds it to a pentanol solvent with a silica precursor to bind the powder together. They first make an ink by using a spatula, then spin it in a food mixer at 3,000 rpm for five minutes. The result is a paste. Putting this paste under pressure—squeezing it—turns it into a liquid slurry that can flow easily through a printing needle. This is called shear thinning.

After flowing into the needle, it can be printed out in the desired shape, layer by layer. Once the tiny object has been formed, they use ammonia gas to make the object into a gel. Then, a special drying process removes the solvent. There you have your aerogel lotus with millimeter-size petals. The group recently laid out its results and a few samples in a paper in the journal Nature.

Malfait says the Swiss institutes are now working with commercial industry partners on feasibility studies for the insulators.

Thermal insulation is a complex field, and there are other ways to diffuse or control heat without custom engineering. There are also other aerogel efforts underway, for example in Singapore, where Hai Duong’s group is using waste products including cotton waste and pineapple leaf in aerogel-making. Aerogels’ 90-year-history is full of false starts down the road toward hoped-for applications, but engineers keep at it: Their properties look too good for them to remain a novelty.

Germany’s BASF and Massachusetts-based partner Aspen Aerogels are building a line of aerogel-based insulator mats. And the doors are open for tiny, custom-made, inexpensive insulators—if industry wants it. Richard Collins, a tech analyst at IDTechEx, offers the reminder that market pull is required for real commercial success, rather than material push.