Microscopic bubbles can tell stories about Earth’s biggest volcanic eruptions and geoscientists from Rice University and the University of Texas at Austin have discovered some of those stories are written in nanoparticles.

In an open-access study published online in Nature Communications, Rice’s Sahand Hajimirza and Helge Gonnermann and UT Austin’s James Gardner answered a longstanding question about explosive volcanic eruptions like the ones at Mount St. Helens in 1980, the Philippines’ Mount Pinatubo in 1991 or Chile’s Mount Chaitén in 2008.

Geoscientists have long sought to use tiny bubbles in erupted lava and ash to reconstruct some of the conditions, like heat and pressure, that occur in these powerful eruptions. But there’s been a historic disconnect between numerical models that predict how many bubbles will form and the actual amounts of bubbles measured in erupted rocks. 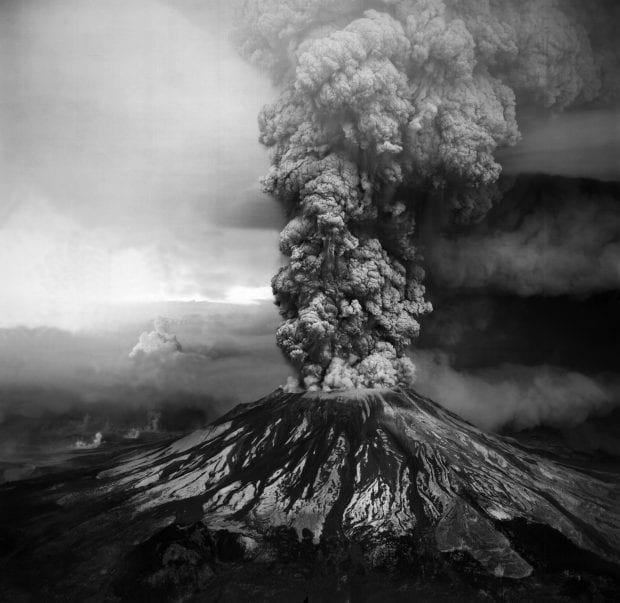 An aerial view from the southwest of Mount St. Helens, Washington, May 18, 1980. The Plinian eruption was the deadliest and most costly volcanic disaster in U.S. history.

Hajimirza, Gonnermann and Gardner worked for more than five years to reconcile those differences for Plinian eruptions. Named in honor of Pliny the Younger, the Roman author who described the eruption that destroyed Pompeii in A.D. 79, Plinian eruptions are some of the most intense and destructive volcanic events.

“Eruption intensity refers to the both the amount of magma that’s erupted and how quickly it comes out,” said Hajimirza, a postdoctoral researcher and former Ph.D. student in Gonnermann’s lab at Rice’s Department of Earth, Environmental and Planetary Sciences. “The typical intensity of Plinian eruptions ranges from about 10 million kilograms per second to 10 billion kilograms per second. That is equivalent to 5,000 to 5 million pickup trucks per second.”

One way scientists can gauge the speed of rising magma is by studying microscopic bubbles in erupted lava and ash. Like bubbles in uncorked champagne, magma bubbles are created by a rapid decrease in pressure. In magma, this causes dissolved water to escape in the form of gas bubbles.

“As magma rises, its pressure decreases,” Hajimirza said. “At some point, it reaches a pressure at which water is saturated, and further decompression causes supersaturation and the formation of bubbles.”

As water escapes in the form of bubbles, the molten rock becomes less saturated. But if the magma continues to rise, decreasing pressure increases saturation.

“This feedback determines how many bubbles form,” Hajimirza said. “The faster the magma rises, the higher the decompression rate and supersaturation pressure, and the more abundant the nucleated bubbles.”

In Plinian eruptions, so much magma rises so fast that the number of bubbles is staggering. When Mount St. Helens erupted on May 18, 1980, for example, it spewed more than one cubic kilometer of rock and ash in nine hours, and there were about one million billion bubbles in each cubic meter of that erupted material.

“The total bubbles would be around a septillion,” Hajimirza said. “That’s a one followed by 24 zeros, or about 1,000 times more than all the grains of sand on all Earth’s beaches.”

In his Ph.D. studies, Hajimirza developed a predictive model for bubble formation and worked with Gardner to test the model in experiments at UT Austin. The new study builds upon that work by examining how magnetite crystals no larger than a few billionths of a meter could change how bubbles form at various depths.

Bubbles from the bottom of the pot are often the first to form, because heterogeneous and homogeneous nucleation typically begin at different temperatures. In rising magma, heterogeneous bubble formation begins earlier, at lower supersaturation levels. And the surfaces where bubbles nucleate are often on tiny crystals.

“How much they facilitate nucleation depends on the type of crystals,” Hajimirza said. “Magnetites, in particular, are the most effective.”

In the study, Hajimirza, Gonnermann and Gardner incorporated magnetite-mediated nucleation in numerical models of bubble formation and found the models produced results that agreed with observational data from Plinian eruptions.

Hajimirza said magnetites are likely present in all Plinian magma. And while previous research on hasn’t revealed enough magnetites to account for all observed bubbles, previous studies may have missed small nanocrystals that would only be revealed with transmission electron microscopy, a rarely used technique that is only now becoming more broadly available. 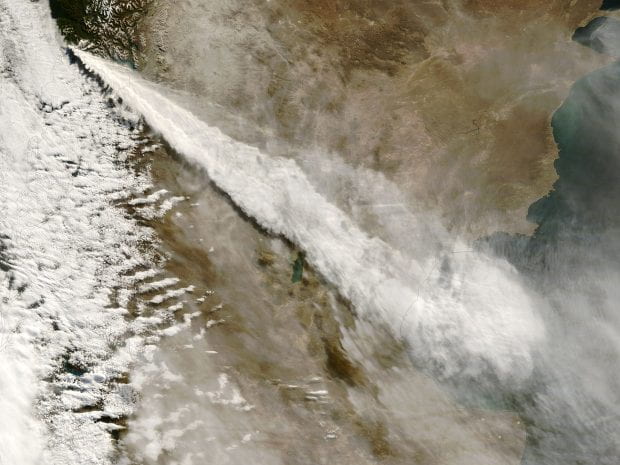 A volcanic plume flows southeast from Chile’s Mount Chaitén in this May 3, 2008 image from the Moderate Resolution Imaging Spectroradiometer (MODIS) on NASA’s Terra satellite. The Plinian plume rose over the Andes Mountains and drifted across Argentina before dissipating over the Atlantic Ocean.

To find out if that’s the case, Hajimirza, Gonnermann and Gardner called for a “systematic search for magnetite nanolites” in material from Plinian eruptions. That would provide observational data to better define the role of magnetites and heterogeneous nucleation in bubble formation, and could lead to better models and improved volcanic forecasts.

“Forecasting eruptions is a long-term goal for volcanologists, but it’s challenging because we cannot directly observe subsurface processes,” said Hajimirza. “One of the grand challenges of volcano science, as outlined by the National Academies in 2017, is improving eruption forecasting by better integration of the observational data we have with the quantitative models, like the one we developed for this study.”