A variety of experiments, including x-ray studies at the Advanced Light Source (ALS), provided direct evidence of a magnetic transition in a type of 2D compound called a MXene (pronounced “maxene”).

The finding adds new functionality to a family of materials with numerous ways to fine-tune properties for applications ranging from spintronic devices to electromagnetic shielding.

MXenes constitute a large and rapidly growing family of 2D transition metal compounds that—like a well-known elemental counterpart, graphene—exhibit properties not found in their corresponding bulk forms. With high electrical conductivity, versatile chemistry, and a wide range of optical properties, MXenes have shown promise for use in many applications, including energy storage, water purification, sensors, and catalysts.

Because they can be composed of a wide variety of transition metals, MXenes also offer the possibility of a low-dimensional platform for engineered magnetic properties, which is of interest for use in applications such as spintronic devices, data storage, and electromagnetic interference shielding. Although magnetic MXenes have been predicted theoretically, the topic remained largely unexplored experimentally. In this work, researchers report direct evidence for a magnetic transition in a MXene compound, paving the way for further studies of magnetism in this large family of 2D materials. 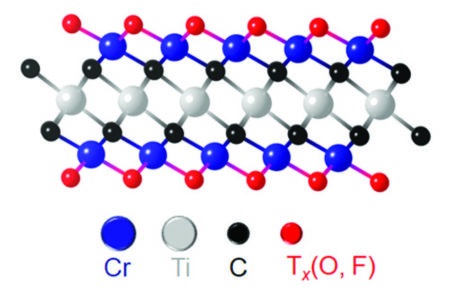 In general, MXenes are transition metal carbides and nitrides described by the chemical formula, Mn+1XnTx (where M = a transition metal, X = carbon or nitrogen, and T = surface terminations such as OH, O, and F). In some cases, two transition metals (M′ and M″) can be present, with the M′ layer sandwiched between two M″ layers. Recently, a group led by researchers from Drexel University was able to synthesize high-quality, practical amounts of the double-transition-metal MXene, Cr2TiC2Tx (read more about the group’s previous ALS research on this compound). This MXene was predicted to be antiferromagnetic with tunable magnetic properties, depending on its surface terminations and external stimuli. However, because surface terminations in real MXene flakes are inhomogeneous compared to their simulated counterparts, the actual magnetic state of Cr2TiC2Tx was still an open question.

To characterize the magnetic properties of the synthesized MXene, the researchers used a combination of magnetometry, magnetotransport measurements, and—at the ALS—x-ray magnetic linear dichroism (XMLD) at Beamline 4.0.2 and photoemission electron microscopy (PEEM) at Beamline 11.0.1. The ALS studies provided element-specific dichroic data to probe for structural and magnetic anisotropies in both free-standing films of Cr2TiC2Tx and single flakes on a silicon substrate.

The PEEM spatial resolution (on the order of tens of nanometers) was critical to analyzing individual flakes (typically smaller than 1–2 µm), while the x-ray spectroscopy measurements provided complementary high-quality, spatially averaged XMLD data. An important characteristic of both beamlines is their ability to perform measurements at low temperatures. The PEEM beamline in particular is one of only a few microscopes around the world capable of these measurements at the temperatures needed for this work.

(a) Magnetometry measurements, obtained after cooling with an external magnetic field (field cooled, FC) and without a field (zero field cooled, ZFC), reveal a divergence at about 30 K, indicating a change in magnetic state. (b) Cr L-edge x-ray absorption (XA) spectra of a free-standing Cr2TiC2Tx film showed little change with temperature; therefore, the strong x-ray linear dichroism (XLD) signal (bottom panel) was attributed to structural anisotropy, which is only weakly affected by temperature. The lack of a magnetic contribution to the XLD signal (despite magnetometry data showing a change of state) can be explained by disordered magnetic moments in a relaxed spin glass. (c) Spatially resolved PEEM images of individual flakes ruled out extrinsic magnetic disorder arising from in-plane rotations of the MXene grains within the film and randomly dispersed MXene flakes.

Transition to a spin glass

Based on the results, the researchers concluded that Cr2TiC2Tx undergoes a magnetic transition around 30 K, below which the material shifts from a local-moment paramagnetic state to a state with a collective magnetic response, specifically, a spin glass state of disordered magnetic moments. The manifestation of a magnetic transition in Cr2TiC2Tx demonstrates the ability of MXenes to host magnetic interactions and lays the groundwork for future studies of magnetism in this relatively new and rapidly growing family of 2D transition metal carbides and nitrides.