Energy-efficient light-emitting diodes (LEDs) have been used in our everyday life for many decades. But the quest for better LEDs, offering both lower costs and brighter colours, has recently drawn scientists to a material called perovskite. A recent joint-research project co-led by the scientist from City University of Hong Kong (CityU) has now developed a 2D perovskite material for the most efficient LEDs.

From household lighting to mobile phone displays, from pinpoint lighting needed for endoscopy procedures to light source to grow vegetables in Space, LEDs are everywhere. Yet current high-quality LEDs still need to be processed at high temperatures and using elaborated deposition technologies — which make their production cost expensive.

Scientists have recently realised that metal halide perovskites – semiconductor materials with the same structure as calcium titanate mineral, but with another elemental composition – are extremely promising candidates for next-generation LEDs. These perovskites can be processed into LEDs from solution at room temperature, thus largely reducing their production cost. Yet, the electro-luminescence performance of perovskites in LEDs still has room for improvements.

Led by Professor Andrey Rogach, Chair Professor at the Department of Materials Science and Engineering at CityU, and his collaborator Professor Yang Xuyong from Shanghai University, the team has found a kind of dimmer switch: they could turn one light emission from perovskites to a brighter level!

They worked with two-dimensional (2D) perovskites (also known as Ruddlesden Popper perovskites) and succeeded to realize very efficient and bright LEDs, with best-reported performance on both current efficiency and external quantum efficiency for devices based on this kind of perovskites. This work has now put the perovskite LEDs close on the heels of current commercial display technologies, such as organic LEDs.

The key to the powerful change lies in the addition of around 10% of a simple organic molecule called methanesulfonate (MeS).

In this study, the 2D perovskites used by the team have a nanometre level thickness. The MeS reconstructs the structure of the 2D perovskite nanosheets, while at the same time enhancing exciton energy transfer between sheets of different thicknesses. Both of these changes have greatly enhanced the electro-luminescence of the thicker, green-emitting perovskite sheets within the 2D structure.

The results of the research for producing better LEDs has been encouraging. The brightness of 13,400 candela/m2 at a low applied voltage of 5.5 V, and external quantum efficiency of 20.5% were recorded. This is close to the maximum that many existing LED technologies can achieve, and has almost doubled the external quantum efficiency level of 10.5% reported in their previous study two years ago.

“My CityU team has built-up its expertise on perovskite materials to a very high level in a relatively short period of time, thanks to funding support from Senior Research Fellowship by the Croucher Foundation. And already we see the benefit, especially in the outcomes detailed in this latest publication,” said Professor Rogach. 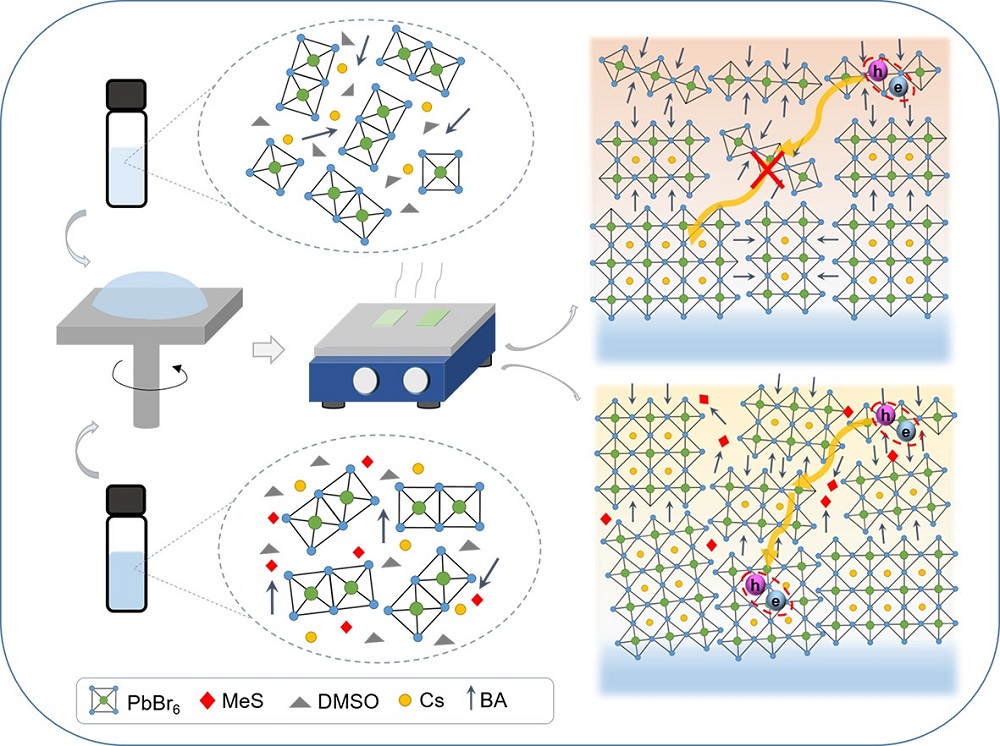 Effects of MeS on phase distribution of perovskite films. The yellow path indicates the exciton energy transfer between nanosheets of different thicknesses. 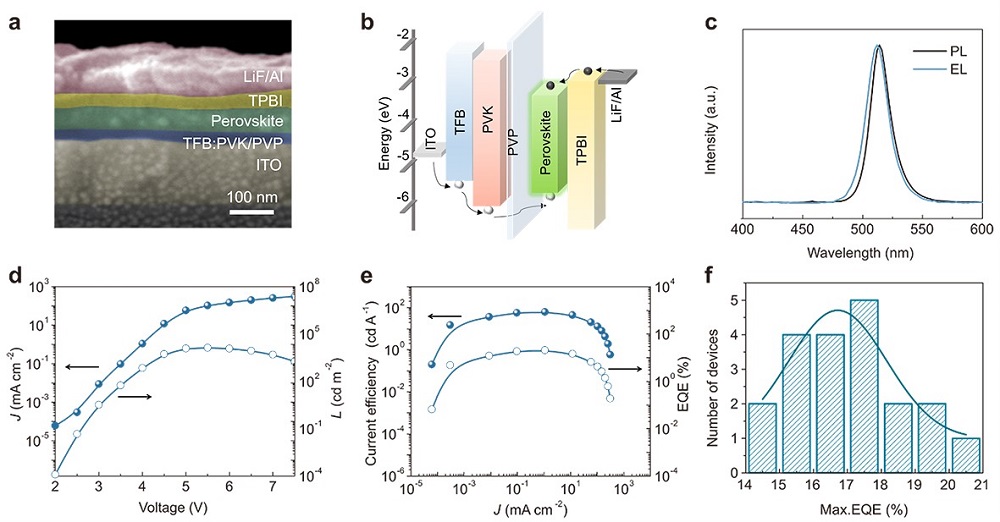 The structure and performance of 2D perovskite LEDs.