Research from the lab of Marija Drndić in the School of Arts & Sciences shows how solid state materials can be developed for large-scale automated sequencing by incorporating state-of-the-art fabrication and analytics.

New research from the lab of Marija Drndić showcases a potential new platform for parallel DNA sequencing. Published in The Journal of Chemical Physics, the study uses state-of-the-art fabrication and analytical techniques and demonstrates a path to how solid state materials can be further developed for high-throughput sequencing. The research was conducted by Drndić, Ph.D. candidate Yung-Chien Killian Chou, undergraduate research assistant Joshua Chen, and postdoc Chih-Yuan Lin.

Many current DNA sequencing platforms rely on protein nanopores, biological constructs that can read single strands of DNA without PCR-based amplification. The use of nanopores has helped reduced the cost and increase the speed of DNA sequencing since they were developed nearly 10 years ago. Protein nanopores, however, are sensitive to degradation. 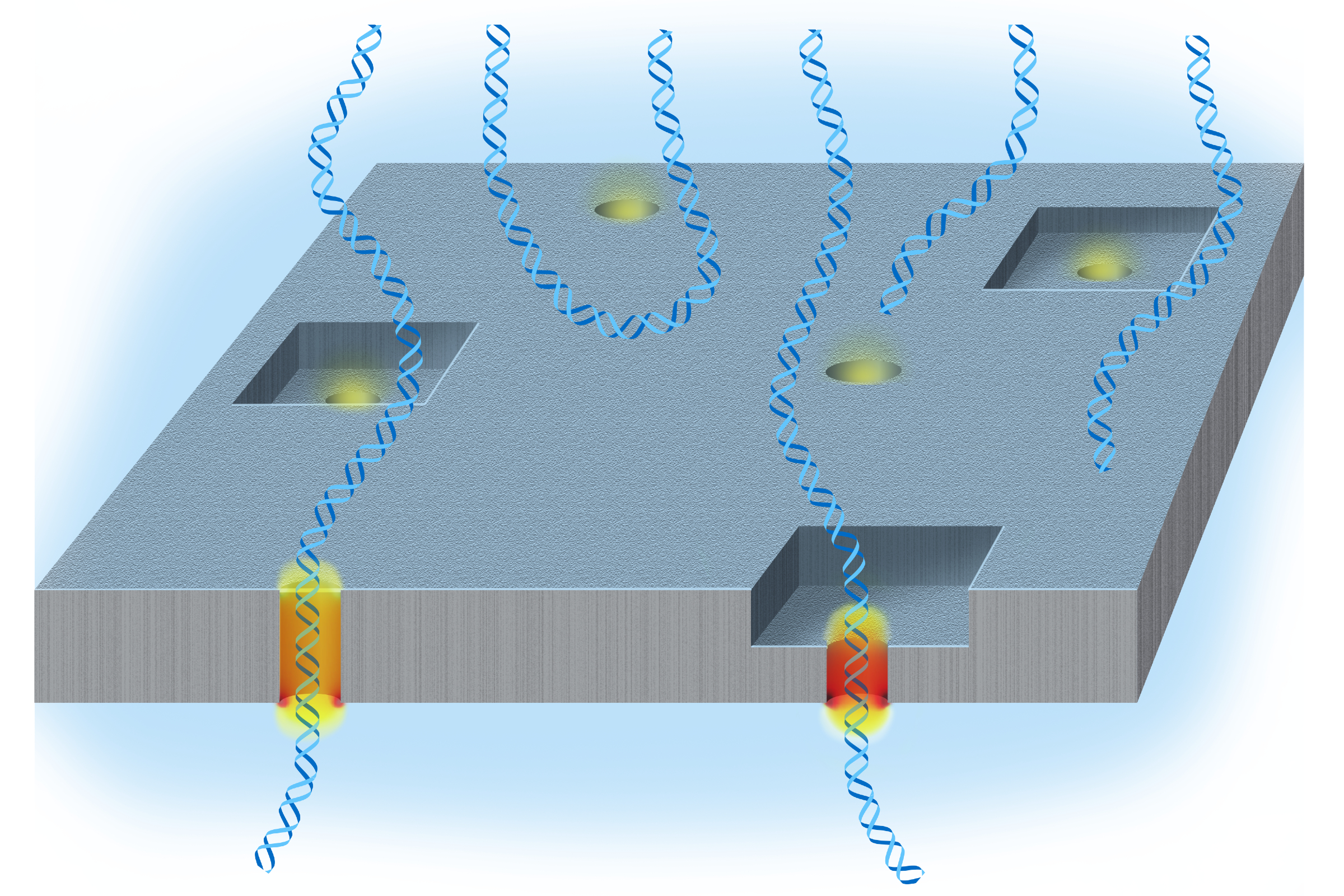 Using silicon nitride membranes with nanometer-level control of pore geometry, diameter, and thickness, a team of Penn researchers found that individual DNA strands could be distinguished between two pores that were housed on a single membrane. (Image: Patrick Lane/ScEYEnce Studios)

Relying on their group’s expertise on solid-state nanopores, ones made from silicon-based constructs instead of proteins, the researchers wanted to see if they could create a device with more than one pore that would still allow them to electrically differentiate individual DNA signals. While there had been numerous experiments on devices with single pores, the researchers wanted to expand their knowledge of these single-pore systems to see how they could scale up the number of DNA strands that could be read at one time using the simplest electrical setup.

Using state-of-the-art solid state fabrication techniques at the Singh Center for Nanotechnology, the researchers were able to thin out specific parts of a silicon nitride membrane using a focused beam of electrons to pattern custom shapes onto the material’s surface. They were able to create sets of 3-nanometer-diameter nanopores, cylinders etched through the membrane, with varying degrees of thickness and depths. They placed the nanopores far enough away from each other so they would not interact, and also created devices with different combinations of pore thickness, including slabs with one thin and one thick pore and controls chip with two equally thin pores.

Using these precise devices, made with nanometer-level control over pore geometry, diameter, and thickness, the researchers found that individual DNA strands could be distinguished between two pores in the silicon nitride membranes. By changing the depth of the pores by adding “trenches,” they could also vary the DNA signals and translocation times through pores with varying thickness.

The researchers were also able to figure out which DNA strands travelled through specific pores, work that was made possible by an automated data analysis improved by Chen. This allowed the researchers to comb through tens of thousands of current spikes and to group individual signals into categories that correspond to DNA going through a specific pore. “We are actually able to map back to which pore they are from,” explains Chou. “The analysis that Josh did is to find out what data is coming from what pore.”

Another advantage of silicon nitride over the protein nanopores is that this platform is more robust and can be reused, the researchers say. While DNA in both systems can get “stuck” to individual pores and clog them, it would allow sequencing to continue without interruption because this system has multiple pores. The researchers saw this natural blockage in several of their experiments, with the overall signal reduced by half when one of the two identical pores was blocked, further evidence that the pores work identically and also don’t interfere with one another.

This work builds off many years of study by her group and others, says Drndić, and was made possible thanks to a thorough understanding of how single-pore systems work. “This is a nice example of a result that comes from a series of concrete improvements in previous papers, like the electronics, the fabrication, in really understanding how one pore works,” she says.

Chou sees this work as putting them “one step closer towards parallel reading of DNA translocation in nanopore sequencing,” with numerous potential avenues for further study. One of particular interest to the group is the use of different coatings and surface modifications, chemical changes that could allow the researchers to control how well DNA sticks onto the material; it could also make the pores more robust against damage. “We can also extend that to three or more different pores, doing different thicknesses, different surface treatments; that’s something I would love to do more,” says Chou.

“You start to appreciate the physical parameters we can play with using a solid state approach: the diameter, the thickness, and the arrangement of the pores,” says Drndić. “What’s very powerful with the solid state is that here we have really sorted out the equations. We are more mathematical, so we can mix and match. This is a showcase of the best of everything combined that you can have, and the fact that it worked had to do with the precision.”