Transitioning to home working had its challenges for us all, but when your job involves researching biological applications for nanotechnology, those trials are a little more complicated than juggling the household’s broadband usage. So barred from his lab, you might reasonably expect the research by organic chemist Vittorio Saggiomo, from the Bionanotechnology group at Wageningen University & Research in the Netherlands, to have come to a grinding halt.

But Saggiomo is a creative, imaginative type, and so he began to wonder if he could turn common household appliances to good use in the fight against COVID-19. More specifically, could he create a cheap, highly sensitive home test for the virus? It turns out he could. His team has now posted the idea on a preprint server, ChemArxiv. The paper is yet to be reviewed by other scientists.

At the moment, there are two main types of COVID-19 test: the PCR test and the lateral flow test (LFT). The gold-standard PCR test checks for the presence of the virus by detecting its genetic material known as RNA. But there are vanishingly small amounts of viral material in a swab, so the material has to be converted into DNA and amplified before it can be detected. And this is achieved by the “polymerase chain reaction”, which is what PCR stands for.

The process involves repeated cycling through a range of temperatures between 50°C and 90°C. During each cycle, the amount of DNA doubles, so after 30 cycles over a billion copies of the viral material can be created from just one strand of starting material. The amplified material is then detected with fluorescent labels that attach themselves to the viral DNA sequences.

As such, PCR is a highly sensitive technique, but it needs specialist materials and equipment to perform. This is why the tests are sent off to a lab, and it takes a day or two to get the result.

The second common test is the lateral flow test (LFT). These work by detecting fragments of viral protein shells. Embedded within the strips of the LFTs are antibodies that bind to the virus. These antibodies are labelled with tiny gold particles, which appear red, allowing you to see them on the test device. The labelled antibodies accumulate on distinct bands on the LFT depending on whether the virus is present or not.

The LFTs are fast, cheap and easy to use, making them ideal for community and home testing. But they are nowhere near as sensitive as the PCR tests – they will only identify people with high viral loads. This means many people who are infected will get a false negative result from such tests.

Ideally, we need a home test that’s as easy to use as the LFTs but as sensitive as the PCR test. An excellent candidate is a method called loop-mediated isothermal amplification (Lamp). This works along very similar principles to PCR, producing multiple copies of the starting genetic material – which you can get from a swab – but has some key advantages.

For example, it can be combined with a handy “colour readout”. When the Lamp reaction occurs, it causes an increase in the acidity of the sample. That means you can add a substance that changes colour according to pH value in the reaction mix, providing a visual indication of a positive or negative result. Another advantage is that Lamp reactions are carried out at a fixed temperature (about 65°C) instead of needing constant cycling through a range of temperatures.

Nevertheless, Lamp still needs fine temperature control. Temperature control systems – be they in a PCR machine, a Lamp instrument or household oven – are usually achieved with electronic thermostats. However, making and shipping new electronic devices specifically designed for home Lamp tests is impractical (especially in the middle of a pandemic). So Saggiomo tried to find a way around this. He hit upon substances called phase change materials that absorb energy (heat) as they melt and so maintain a constant temperature.

After finding a wax made of such a material that melted at exactly the required temperature, Saggiomo set about constructing a device to house the Lamp reaction tubes and chunks of wax. This then needed to be inserted into some other material that could be heated. The perfect housing turned out to be staring him in the face while making his morning coffee: Nespresso coffee machine capsules.

The final step was just finding the right way to heat the capsules. After trying the dishwasher (it worked but samples kept getting lost), the microwave oven (failed, because the tubes overheated and lids popped off) and cups full of hot water (not enough control on the temperature), Saggiomo settled on a simple pan of simmering water on a stovetop. The resulting “CoroNaspresso” device, when tested by other members of the team, with swabs from six people, correctly identified three cases of COVID-19 (these had a different colour to the negative tests). 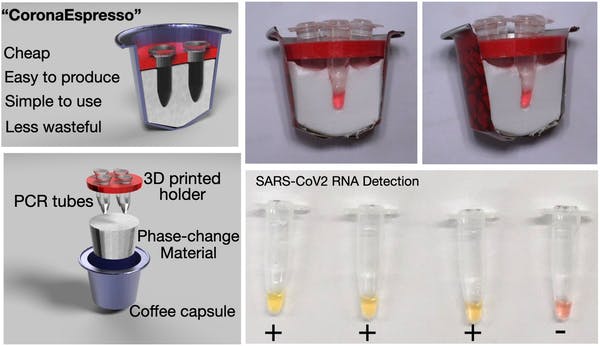 The test, including the capsules, phase changing wax and vials in which to insert genetic material, would be easy to produce in millions. People could then swab for genetic material at home and heat the capsules to get their results. These devices are also cheap (about €0.20), easy to make, easy to use and largely recyclable. Maybe we’ll see the CoroNespresso tests in our homes soon, just don’t get them confused with your regular coffee pods.