Glass Nanopore Pulls DNA Like Spaghetti through a Needle

DNA sequencing has become so common, few realize how hard it is to even extract a single molecule of DNA from a biological sample.

Research led by UC Riverside is making it easier to detect and capture DNA from fluid samples such as blood using a tiny glass tube and electric current. The technique, described in the journal, Nanoscale, can also improve cancer diagnosis in the future.

DNA, a double-stranded, electrically charged molecule that contains all the information an organism needs to create and organize the building blocks of life, is tightly folded within the cell nucleus. Extracting the DNA from a single cell is time consuming and impractical for many medical and scientific purposes. Fortunately, as cells die naturally, their membranes burst, releasing the contents, including DNA. This means that a blood sample, for example, contains many strands of free-floating DNA that should, in theory, be easier to identify and extract in quantity.

However, scavenger cells called macrophages that clean up cellular waste destroy most cell-free DNA, leaving it at low concentrations in the blood. Most approaches to capturing cell-free DNA require expensive techniques that first concentrate the molecules before using fluorescent dyes to help see the DNA.

Corresponding author Kevin Freedman, an assistant professor of bioengineering at UC Riverside’s Marlan and Rosemary Bourns College of Engineering, led an effort to improve detection and capture of DNA at lower concentrations by using an electric charge to direct a DNA sample directly into a glass tube with a tiny opening called a nanopore. Nanopore sensing has emerged as a fast, reliable, and cost-effective diagnosis tool in different medical and clinical applications.

“We know that if you apply voltage across a cell membrane, ions will move through pores in the cell membrane,” Freedman said. “DNA also travels with the electric field, and we can use it to move the DNA.” 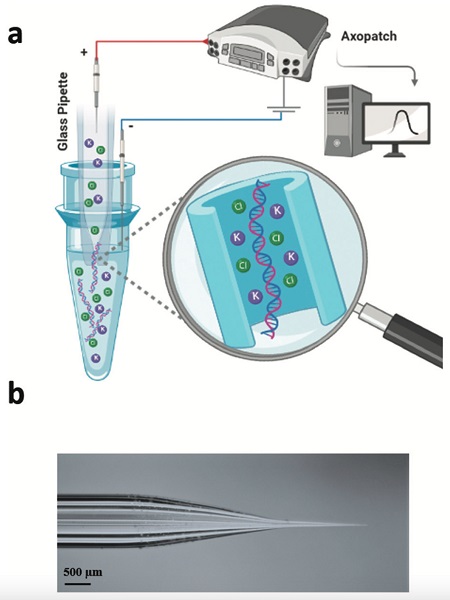 An illustration showing (a) how a glass tube with a tiny opening and a positive electrode, when inserted into a liquid sample and stimulated with electricity, collects cell-free DNA floating in the sample; (b) a photograph of the borosilicate glass nanopore.

The researchers put a positive electrode inside a glass tube with an opening, or pore, 20 nanometers wide — a bit bigger than a DNA molecule but too small to admit cells. They applied an electrical potential to the nanopore, which was dipped into a vial containing a DNA sample and a negative electrode. The cell-free DNA moved into the pore and blocked it. The change in electrical current as the DNA traveled through the pore allowed the researchers to detect it.

“It’s like trying to pull spaghetti through a needle,” Freedman said. “To go through the pore it has to be almost perfectly linear.”

The closer to the liquid surface the researchers held the pore, the more DNA it picked up.

“Amazingly, we found that DNA accumulates at the liquid-air interfaces. If there is a cooling layer, the DNA will try to go to the cooler location,” Freedman said. “We hope the same is true for a blood sample, so the same mechanism can be used to concentrate DNA near the surface. Not only is this beneficial, but this nanopore-sensing strategy demonstrated a higher signal-to-noise ratio near the surface as well. It is really a win-win situation.”

With some refinements, the authors think their purely electric technique could help diagnose some kinds of cancer from a single blood sample. In addition to DNA, as tumors grow, vesicles are released into the blood stream. These mini lipid-based droplets can be thought of as mini-cells that are identical to the original cancer cells and could also be detected by nanopore sensing.

Considering all the unique features of this purely electrical technique, the nanopore-sensing system has the potential to be utilized as a point-of-care diagnostic test evaluation in the future.