Bowel cancer survival rates could be improved if chemotherapy drugs were delivered via tiny nanoparticles to the diseased organs rather than oral treatment.

That’s the finding from Indian and Australian scientists who have undertaken the first study, using nanoparticles to target bowel cancer, the third most common cancer in the world and the second most deadliest.

The researchers have shown in animal experiments that nanoparticles containing the chemotherapy drug Capecitabine (CAP) attach themselves directly to the diseased cells, bypassing healthy cells and therefore reducing toxic side effects as well as the size and number of tumours.

The scientists, from the Manipal Academy of Higher Education, Indian Institute of Science and the University of South Australia, have published their findings in the journal Carbohydrate Polymers. 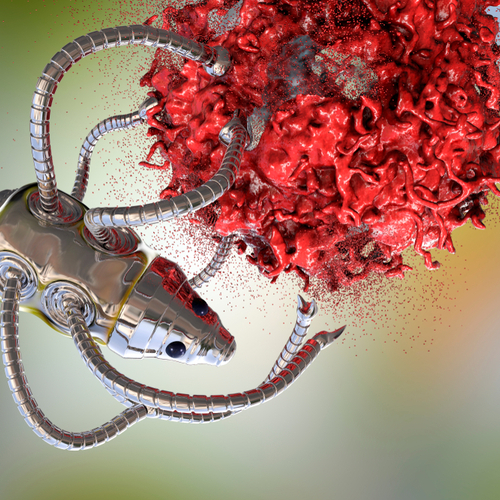 3D illustration of a nanobot attacking a cancer cell.

“Due to its short life, a high dose is necessary to maintain effective concentration, resulting in some harsh side effects when delivered conventionally, including severe hand and foot pain, dermatitis, nausea, vomiting, dizziness and loss of taste,” Prof Garg says.

The side effects are exacerbated because the drug affects both healthy and diseased cells.

“A viable alternative to conventional therapy is targeted drug delivery using nanoparticles as smart carriers so that the drug can be delivered specifically to the tumour. This allows a smaller and less toxic dose,” he says.

CAP delivered via nanoparticles reduces both the size and number of cancerous bowel tumours, results in fewer abnormal cells, improved red and white blood cell counts and less damage to other organs.

The targeted delivery system has a dual function: binding the receptors as well as releasing the drug to the tumour micro-environment.

“It has been a challenging project but we believe the platform technology developed can be applied to other cancers and chemotherapeutic drugs,” Prof Garg says.

Approximately two million people are diagnosed with bowel cancer each year and half of those are not expected to survive, according to the World Health Organization. The risk factors include consuming processed meat, red meat and alcoholic drinks and obesity.

Read the original article on University of South Australia (UniSA).