A Material-keyboard Made of Graphene

Researchers at ETH Zurich have succeeded in turning specially prepared graphene flakes either into insulators or into superconductors by applying an electric voltage. This technique even works locally, meaning that in the same graphene flake regions with completely different physical properties can be realized side by side.

The production of modern electronic components requires materials with very diverse properties. There are isolators, for instance, which do not conduct electric current, and superconductors which transport it without any losses. To obtain a particular functionality of a component one usually has to join several such materials together. Often that is not easy, in particular when dealing with nanostructures that are in widespread use today.

A team of researchers at ETH Zurich led by Klaus Ensslin and Thomas Ihn at the Laboratory for Solid State Physics have now succeeded in making a material behave alternately as an insulator or as a superconductor – or even as both at different locations in the same material - by simply applying an electric voltage. Their results have been published in the scientific journal Nature Nanotechnology. The work was supported by the National Centre of Competence in Research QSIT (Quantum Science and Technology). 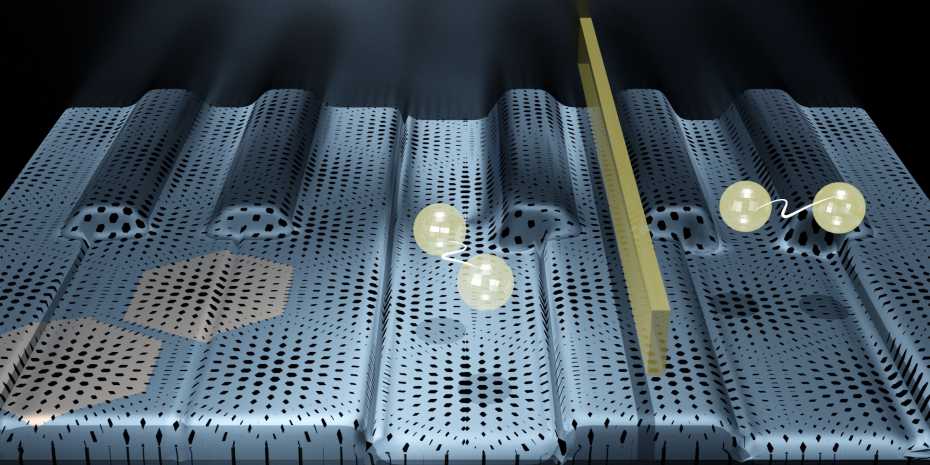 The material keyboard realized by the ETH Zurich researchers. By applying electric voltages (“keys”) at different points, the magic-​angle graphene can become locally superconducting (electron pairs) or isolating (barrier on the right).

Graphene with a magic angle

The material Ensslin and his co-​workers use bears the somewhat cumbersome name “Magic Angle Twisted Bilayer Graphene”. In actual fact, this name hides something rather simple and well-​known, namely carbon – albeit in a particular form and with a special twist. The starting point for the material are graphene flakes, which are carbon layers that are only one atom thick. The researchers put two of those layers on top of each other in such a way that their crystal axes are not parallel, but rather make a “magic angle” of exactly 1.06 degrees. “That’s pretty tricky, and we also need to accurately control the temperature of the flakes during production. As a result, it often goes wrong,” explains Peter Rickhaus, who was involved in the experiments as a postdoc.

In twenty percent of the attempts, however, it works, and the atomic crystal lattices of the graphene flakes then create a so-​called moiré pattern in which the electrons of the material behave differently than in ordinary graphene. Moiré patterns are familiar from television, for instance, where the interplay between a patterned garment and the scanning lines of the television image can lead to interesting optical effects.

On top of the magic angle graphene flakes the researchers attach several additional electrodes which they can use to apply an electric voltage to the material. When they then cool everything down to a few hundredths of a degree above absolute zero, something remarkable happens. Depending on the applied voltage, the graphene flakes behave in two completely opposite ways: either as a superconductor or as an insulator. This switchable superconductivity was already demonstrated in 2018 at the Massachusetts Institute of Technology (MIT) in the USA. Even today only a few groups worldwide are able to produce such samples.

Insulator and superconductor in the same material

Ensslin and his colleagues are now going one step further. By applying different voltages to the individual electrodes they turn the magic angle graphene into an insulator in one spot, but a few hundred nanometres to one side it becomes a superconductor. 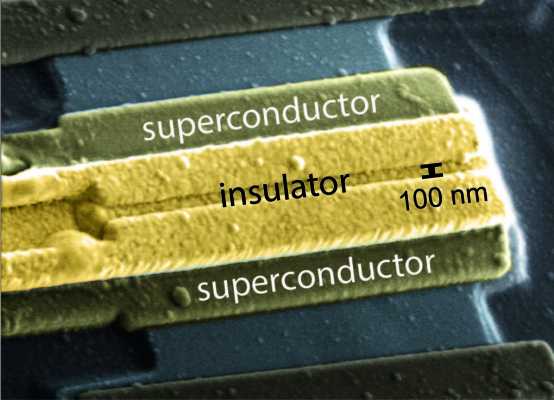 Electron microscope image of the Josephson junction (false colours). Using the electrodes (bright and dark gold) as piano keys, an insulating layer only 100 nanometres thick can be created between the two superconducting regions.

“When we saw that, we obviously first tried to realize a Josephson junction”, says Fokko de Vries, who is also a postdoc in Ensslins laboratory. In such junctions two superconductors are separated by a wafer-​thin insulating layer. In this way, current cannot flow directly between the two superconductors but rather has to tunnel quantum mechanically through the insulator. That, in turn, causes the conductivity of the contact to vary as a function of the current in a characteristic fashion, depending on whether direct or alternating current is used.

The ETH researchers managed to produce a Josephson junction inside the graphene flakes twisted by the magic angle by using different voltages applied to the three electrodes, and also to measure its properties. “Now that that’s worked as well, we can try our hands at more complex devices such as SQUIDs”, says de Vries. In SQUIDs (“superconducting quantum interference device”) two Josephson junctions are connected to form a ring. Practical applications of such devices include measurements of tiny magnetic fields, but also modern technologies such as quantum computers.

For possible uses in quantum computers, an interesting aspect is that with the help of the electrodes the graphene flakes can be turned not just into insulators and superconductors, but also into magnets or so-​called topological insulators, in which current can only flow in one direction along the edge of the material. This could be exploited to realize different kinds of quantum bits (qubits) in a single device.

A keyboard for materials

“So far, however, that’s just speculation”, Ensslin says. Still, he is enthusiastic about the possibilities that arise from the electrical control even now. “With the electrodes, we can practically play the piano on the graphene”. Amongst other things, the physicists hope that this will help them to gain new insights into the detailed mechanisms that bring about superconductivity in magic angle graphene.