In Milliseconds from Polluted to Clear Water

Researchers at the Max Planck Institute of Colloids and Interfaces developed a membrane that is composed of a bundle of nanometer-sized tubes. They used it as a nanoreactor to convert water marked with methylene blue into clear water in milliseconds using sunlight as a driver. ‘Running reactions in fluids with lower viscosity in a blink of an eye represents a new opportunity for chemistry,’ says Prof. Markus Antonietti.

Chemistry is often considered as a mature discipline in which new findings only emerge at the outer rims. A team led by Dr. Aleksandr Savateev has now shown that there are still remarkable surprises in the very core, at the nanoscale. Properties of common fluids like water depend on the size of the container in which they are confined. If you fill water, already a quite agile liquid with low viscosity, into a nanosized container that can fit only a few water molecules, it becomes ‘superfluidic’. The smaller the confinement, the larger the superfluid effect. Not all water is the same. 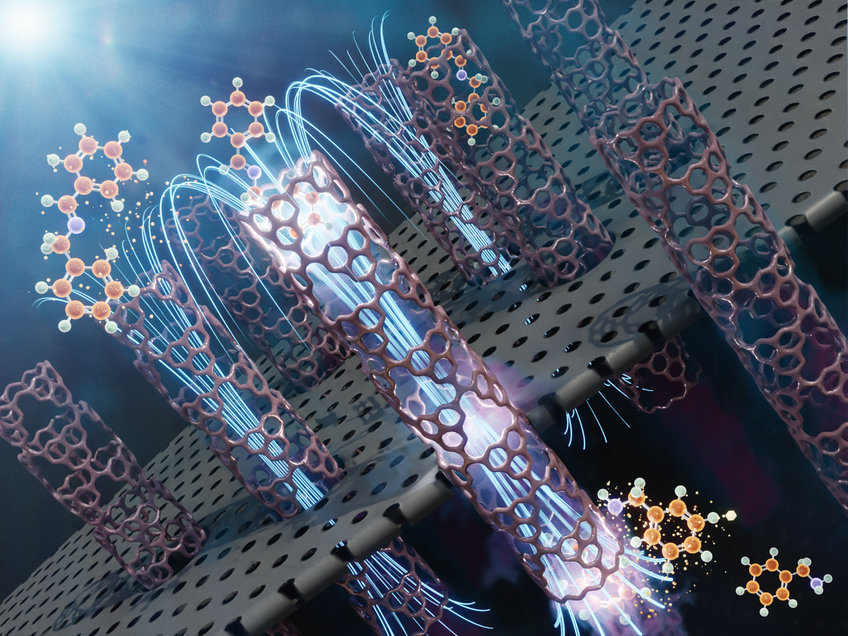 In this image we see several parallel nanometer-sized tubes as a part of the membrane in which the photocatalytic reaction takes place. The membrane is a macroscopic object composed of an ensemble of such nanotubes.

In their reaction experiments, the Savateev group developed a membrane composed of billions of parallel carbon nitride tubes, each with a diameter of a few nanometers, which is 1/10,000 of a human hair. They observed that water slides through these tubes without any friction. In such settings, light is used as a driver for the chemical transformation of polluted water into clear water, while quantum confinement created by the membrane also directs energy of light with unprecedented efficiency.

The concave surface of the parallel, nearly one-dimensional tubes, serves as a kind of a mirror that concentrates internal electric field inside the nanotube. Combined with the light coming from outside, it enhances drastically the reaction rate. ‘In ordinary 3D space, reaction rates in milliseconds are simply impossible,’ Dr. Savateev says.

‘We are actively working on the development of this technology to synthesize fuel and other for the society important materials using sustainable energy like solar light, in simple devices comparable to a coffee filter,’ says Aleksandr Savateev.