Researchers have developed new types of materials that combines two or three types of nanoparticles into structures that display fundamental new properties such as superfluorescence.

“The whole goal of this research is to make new materials with new properties and/or exotic new structures,” said Alex Travesset, an Iowa State University professor of physics and astronomy and an associate scientist for the U.S. Department of Energy’s Ames Laboratory. “Those materials are made of very tiny materials, nanoparticles, and lead to properties not shared by more traditional materials made of atoms and molecules.”

In this case, an international research team is combining perovskite nanocubes – tiny crystals with useful electrical or optical properties – with spherical nanoparticles to form a regular, repeating structure called a superlattice. The researchers successfully assembled three different superlattices, with one displaying superfluorescence, while another did not.

“This is an example of how structure determines function,” Travesset said.

The researchers reported their discovery in a paper just published by the journal Nature that also made the issue’s cover. 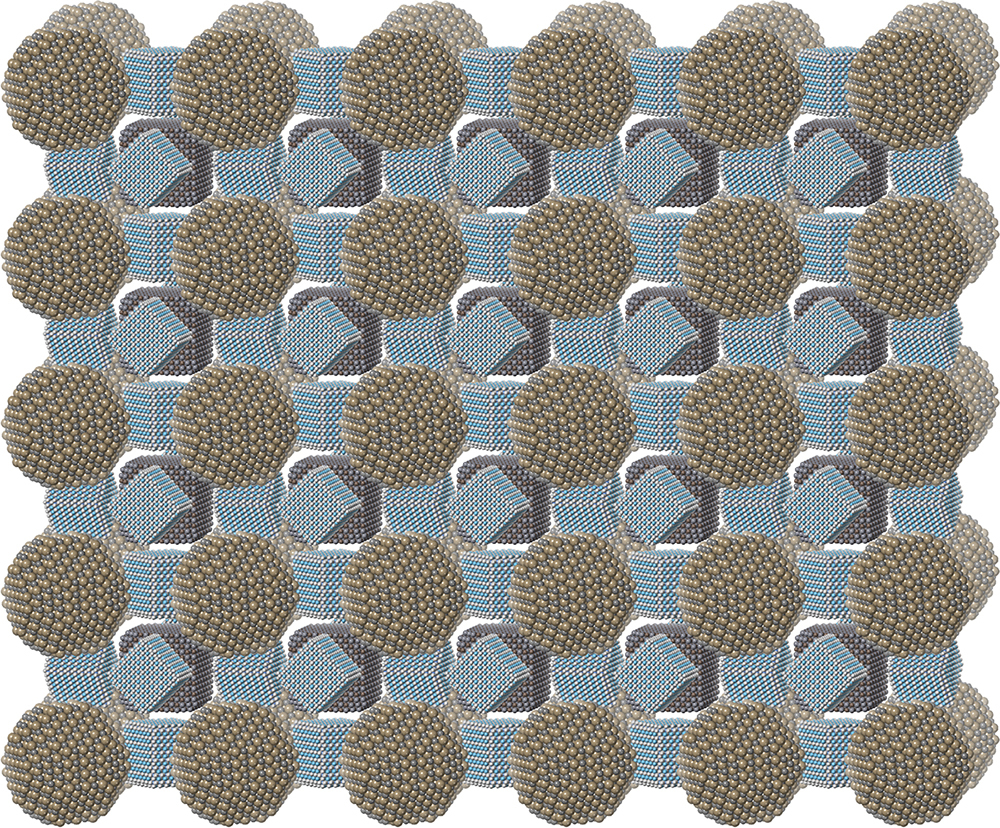 Researchers combined perovskite nanocubes – tiny crystals with useful electrical or optical properties – with spherical nanoparticles to form a regular, repeating structure called a superlattice. Some of these structures displayed superfluorescence, "a burst of photons." Larger illustration.

Maksym Kovalenko, a professor of chemistry and applied biosciences at ETH Zürich, the Swiss Federal Institute of Technology, is the leader of the project and the paper’s corresponding author. Ihor Cherniukh, a doctoral student at ETH Zürich, is the first author.

This is the first time such nanoparticles have been combined, the researchers reported in the paper.

Travesset, whose campus website identifies him as a professor of “All things nanoparticles,” said he provided the group with theoretical and computational guidance that established what structures would be possible and also made quantitative predictions.

It turned out the predictions were in agreement with the experimental results.

Travesset said the project demonstrates it’s “the structure that determines the optoelectronic properties. These are properties that depend on the actual structures – on how the particles are arranged.”

A four-year, $385,000 grant from the National Science Foundation supported Travesset’s work on the project.

Although the goal for this project was to advance fundamental science, Travesset said the basic discovery will lead to some practical uses such as ultrabright, quantum light sources.

Perovskite materials are very efficient at turning sunlight into electricity, and so they’re being studied for use in solar cells. Now, with the assembly techniques discovered in this project, Travesset said different nanoparticles could be combined to produce novel materials with simultaneous complementary properties.

“We can now take the amazing properties of perovskites,” Travesset said, “and combine them with nanoparticles with complementary properties and design materials that perform several functions at the same time.”