Shiny Mega-crystals That Build Themselves

An international team led by Empa and ETH Zurich researchers is playing with shape-engineered nanoscale building blocks that are up to 100-times larger than atoms and ions. And although these nano "Lego bricks" interact with each other with forces vastly different and much weaker than those holding atoms and ions together, they form crystals all by themselves, the structures of which resemble the ones of natural minerals. These new mega-crystals or superlattices that are depicted on the cover of the latest issue of "Nature" exhibit unique properties such as superfluorescence – and may well usher in a new era in materials science.

To really appreciate what a team of researchers led by Maksym Kovalenko and Maryna Bodnarchuk has achieved, it is best to start with something mundane: Crystals of table salt (also known as rock salt) are familiar to anyone who has ever had to spice up an overtly bland lunch. Sodium chloride – NaCl in chemical terms – is the name of the helpful chemical; it consists of positively charged sodium ions (Na+) and negatively charged chloride ions (Cl-). You can imagine the ions as beads that strongly attract each other forming densely packed and rigid crystals like the ones we can see in a saltshaker.

Many naturally occurring minerals consist of ions – positive metal ions and negative ions, which arrange themselves into different crystal structures depending on their relative sizes. In addition, there are structures such as diamond and silicon: These crystals consist of only one kind of atoms – carbon in the case of diamond –, but, similar to minerals, the atoms are also held together by strong bonding forces.

Novel building blocks for a new kind of matter

What if all these strong bonding forces between atoms could be eliminated? In the realm of atoms, with all the quantum mechanics at play, this would not yield a molecule or a solid-state matter, at least at ambient conditions. "But modern chemistry can produce alternative building blocks that can indeed have vastly different interactions than those between atoms," says Maksym Kovalenko, Empa researcher and professor of chemistry at ETH Zurich. "They can be as hard as billiard balls in a sense that they sense each other only when colliding. Or they can be softer on the surfaces, like tennis balls. Moreover, they can be built in many different shapes: not just spheres, but also cubes or other polyhedra, or more anisotropic entities."

Such building blocks are made of hundreds or thousands of atoms and are known as inorganic nanocrystals. Kovalenko's team of chemists at Empa and ETH is able to synthesize them in large quantities with a high degree of uniformity. Kovalenko and Bodnarchuk, and some of their colleagues the world over, have been working for about 20 years now with these kinds of building blocks. The scientists call them "Lego materials" because they form long-range ordered dense lattices known as superlattices.

It had long been speculated that mixing different kinds of nanocrystals would allow the engineering of completely new supramolecular structures. The electronic, optical or magnetic properties of such multicomponent assemblies would be expected to be a mélange of the properties of the individual components. In the early years, the work had focused on mixing spheres of different sizes, resulting in dozens of various superlattices with packing structures that mimic common crystal structures, such as table salt – albeit with crystal unit cells ten- to 100-times larger.


With their latest article in "Nature", the team led by Kovalenko and Bodnarchuk now managed to expand the knowledge a great deal further: They set out to study a mixture of different shapes – spheres and cubes to start with. This seemingly simple deviation from the mainstream immediately led to vastly different observations. Moreover, the chosen cubes, namely colloidal cesium lead halide perovskite nanocrystals, are known as some of the brightest light emitters developed to date, ever since their invention by the same team six years ago. The superlattices the researchers obtained are not only peculiar as far as their structure is concerned, but also with respect to some of their properties. In particular, they exhibit superfluorescence – that is, the light is irradiated in a collective manner and much faster than the same nanocrystals can accomplish in their conventional state, embedded in a liquid or a powder. 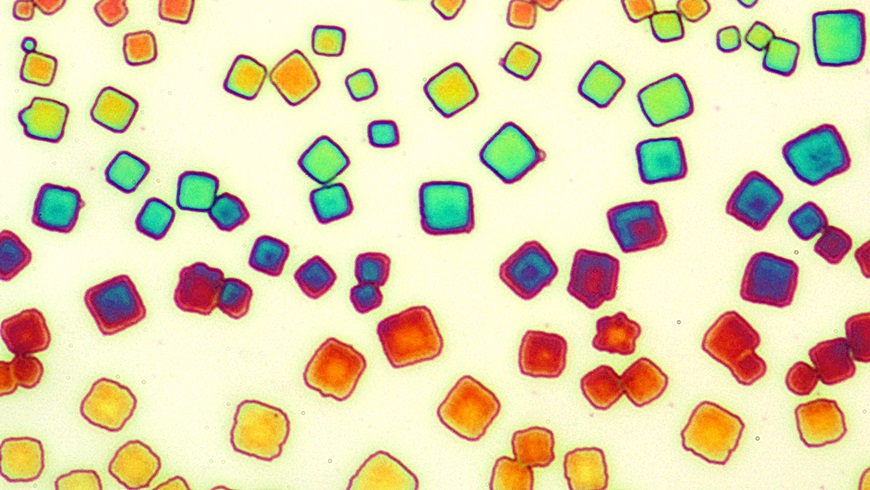 Optical microscopy image of large cubic superlattices. Such superlattices are potential candidates for use as highly energy-efficient,ultrafast light emitters.

Entropy as an ordering force?

Upon mixing spheres and cubes, wondrous things happen: The nanocrystals arrange themselves to form structures familiar from the world of minerals such as perovskites or rock salt. All these structures, however, are 100-times larger than their counterparts in conventional crystals. What's more: A perovskite-like structure had never before been observed in the assembly of such non-interacting nanocrystals.

Especially curious: These highly ordered structures are created solely by the force of entropy – that is, the perpetual endeavor of nature to cause maximum disorder. What a perfect joke of nature! This paradoxical assembly occurs because, during crystal formation, the particles tend to use the space around them most efficiently in order to maximize their freedom of motion during the late stages of solvent evaporation, i.e. before they are "frozen" in their eventual crystal lattice positions. In this regard, the shape of the individual nanocrystals plays a crucial role – soft-perovskite cubes allow for a much denser packing than what is attainable in all-spherical mixtures. Thus, the force of entropy causes the nanocrystals to always arrange in the densest possible packing – as long as they are designed such that they do not attract or repel each other by other means, such as electrostatics.

The dawn of a new science

"We have seen that we can make new structures with high reliability," says Maksym Kovalenko. "And this now raises many more questions; we are still at the very beginning: What physical properties do such weakly bonded superlattices exhibit and what is the structure-property relationship? Can they be used for certain technical applications, say, in optical quantum computing or in quantum imaging? According to what mathematical laws do they form? Are they truly thermodynamically stable or only kinetically trapped?" Kovalenko is now searching for theorists who might be able to predict what may yet happen.

"We will eventually discover completely new classes of crystals," he speculates, "ones, for which there are no natural models. They will then have to be measured, classified and described." Having written the first chapter in the textbook for a new kind of chemistry, Kovalenko is more than ready to deliver his share to make that happen as fast as possible. "We are now experimenting with disk- and cylinder-shaped nanocrystallites. And we're very excited to see the new structures they enable", he smiles.