Diagnosing COVID-19 in 10 seconds, kit in high demand across world after completing reliability testing with 99% accuracy.

Turkey's health regulators approved the use of a nanotechnology-based device developed by Turkish scientists that diagnoses COVID-19 in 10 seconds with 99% accuracy, after completing reliability testing, and the device has started to be used.

Bulend Ortac, a researcher at the National Nanotechnology Research Center (UNAM) of Bilkent University in the capital Ankara, said a high-technology test system, named Diagnovir, has been approved by the Health Ministry's Public Health General Directorate and the Turkish Medicines and Medical Devices Agency.

"The technology that we developed has (now) become available for usage in the field," he told Anadolu Agency.

"We found out in clinical studies that it (Diagnovir) has a 99% accuracy," he said, expressing his satisfaction at the Turkish scientists' success.

Ortac said the fast test kit responds to different strains of the virus and provides results in five to 10 seconds if positive, and 20 to 30 seconds if negative.

"The PCR test has a high error margin and delivers results in two to three days after infection, whereas our technology responds in seconds, even at the early stages of the disease," he added. 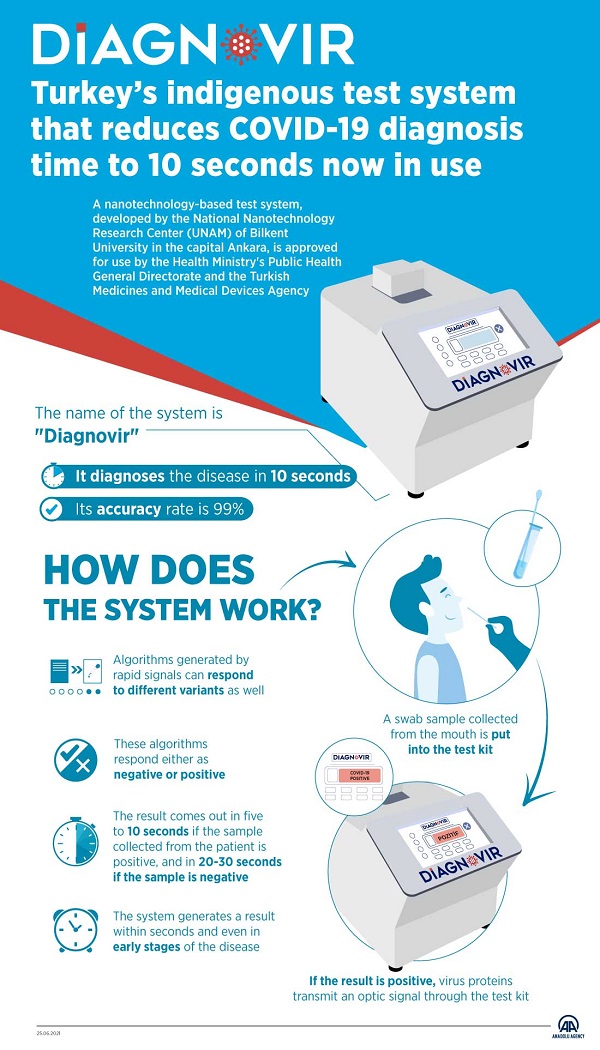 The university Rector Abdullah Atalar told Anadolu Agency that a project was launched at the UNAM to develop a test system that provides quick results.

Diagnovir is expected to replace PCR testing due to its higher reliability, speed, and more accurate results, he added.

"We are in the serial production phase right now," he said. However, he added that "the device is in high demand around the world, (with people) telling us they want to use it."

Underlining that Diagnovir received a lot of interest at some of the world's most prominent places and events, Atalar said: "Places with a higher risk of COVID-19, such as airports, demand it for immediate results. Large factories demand it as a production halt can cause great costs. The German Football League wants it as well."

"We believe this is a system that is unique in the world," he remarked.

Atalar added that the university has already used Diagnovir for a safe graduation ceremony attended by approximately 1,200 people in each one of eight separate sessions, including graduating students and their families.