Researchers at IUPUI’s Integrated Nanosystems Development Institute and the Mechanical and Energy Engineering Department in the School of Engineering and Technology have discovered new nanoparticles that have high-tech applications including energy storage and space travel.

They're known as high-entropy nanoparticles, and they join a family of 2D nanomaterials known as MXenes, extremely thin high-performance ceramic nanoparticles with a larger lateral size, much like a sheet of paper. 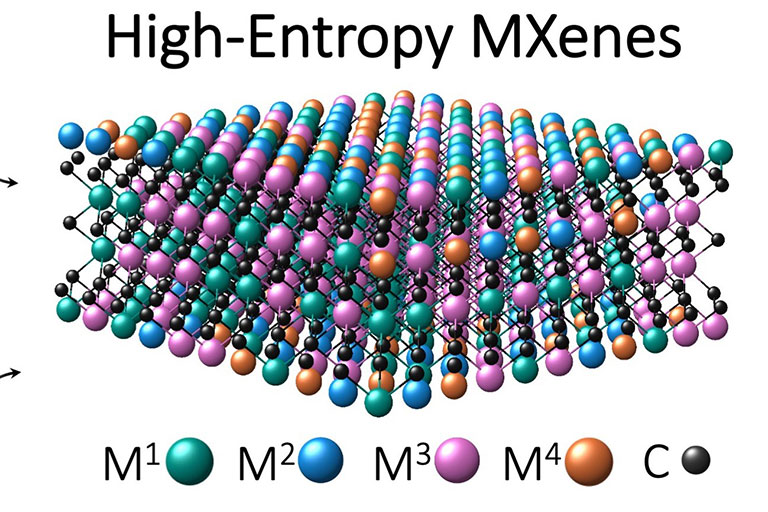 This finding, highlighted in a study published in ACS Nano, marks another expansion of MXenes since their initial discovery in 2011 and greatly expands the family of existing MXenes.

“These newly discovered, high-entropy nanoparticles will help create a toolbox to further design MXenes and tune their properties,” said Babak Anasori, an assistant professor of mechanical and energy engineering and PI of the study. “MXenes, right now, are among the strongest 2D materials ever explored. We expect that these high-entropy nanoparticles will further increase MXene strength, which already outperform other nanomaterials in many high-tech applications.”

To develop the high-entropy nanoparticles, researchers designed a system that uses early transition metals – those in groups three through six of the periodic table – to make the precursor, high-entropy carbide compositions, named MAX phases. The precursor was then put into acid to selectively dissolve the aluminum layers, and researchers used a variety of methods, including X-ray diffraction, photoelectron spectroscopy, and electron microscopy, to confirm that the four elements stayed within the 2D materials, thus creating a four-element, high-entropy 2D carbide for the first time.

“We used state-of-the-art supercomputers to understand why such novel structures can be made,” said study co-author Subramanian Sankaranarayanan, the Theory and Modeling Group leader at Argonne National Lab and an associate professor at the University of Illinois, Chicago. “The number of possibilities in these MXene nanoparticles is so large that only supercomputers can perform the required calculations and predict their chemical, electrical and magnetic properties.”

The high-entropy MXenes may have a variety of uses, including personal and commercial applications and possibly national defense. Due to their ultra-high temperature properties, Anasori said these new nanoparticles may be utilized in the future as building blocks for materials used in space exploration or hypersonic flights that require an ability to withstand extremely high temperatures. And because of their unique electrical and chemical properties, the nanoparticles could be used to develop the materials used in quantum computing or to create better batteries and energy storage materials.

“These are uncharted territories, where no one knew anything about this subfamily of nanomaterial,” said Kartik Nemani, a PhD student in IUPUI’s School of Engineering and Technology and first author on the study. “The idea of knowing that you know something that no one else on this planet knows about, and to be part of such fundamental research from the very beginning, is one of the best feelings a researcher can ever have. And now with this expansion of the MXene family, the possibilities for how they can be used in the future have only grown.”

Anasori previously was at Drexel University, the birthplace of 2D MXenes. He was also instrumental in a 2015 discovery of another subfamily of MXenes called ordered double transition metal MXenes, which contain two different elements in atomic layers in a sandwich form.

Other IUPUI collaborators on the study include Bowen Zhang, Brian C. Wyatt and Weichen Hong of the School of Engineering and Technology. Argonne National Laboratory’s Zachary D. Hood and Michael G. Sternberg, Sukriti Manna of the University of Illinois, Chicago, and Rasoul Khaledialidusti from the Norwegian University of Science and Technology were co-authors.

Read the original article on The Trustees of Indiana University.